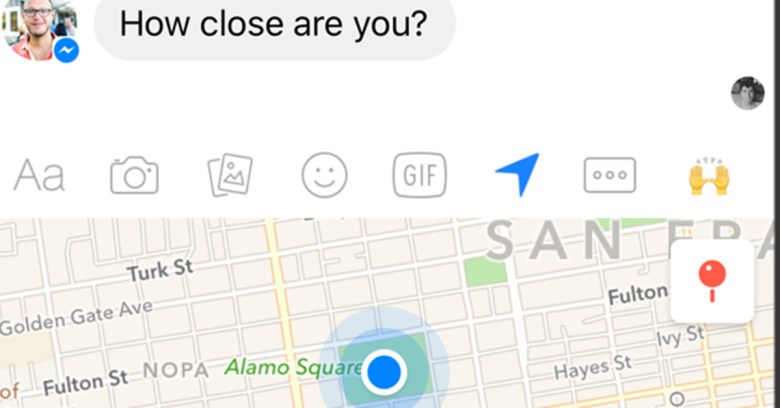 Just days after Google announced it was launching its time-limited location-sharing feature for Google Maps, Facebook weighed in with its announcement that it is rolling out a new feature for its Messenger app that will allow users to share their location for an hour, Reuters reported on Monday.

The move seems to be based on scanning what users say in their messages to friends: Stan Chudnovsky, Messenger head of product, said that one of the most common things people say in the app is “How far away are you?”. He added: “It happes to be what people are saying, what they’re interested in the most.”

In its blog post announcing the new feature, Facebook was keen to stress that it’s “completely optional. You are always in control.”

Uber has called a halt to its experiments with self-driving cars in Arizona after one of its vehicles was involved in a crash that left it lying damaged on its side.

Local police in Tempe, Arizona, said that there was a human behind the wheel at the time, but “it is uncertain at this time if they were controlling the vehicle at the time of the collision”. Police added that the accident happened when another car “failed to yield” on a left turn.

Meanwhile, however, the taxi app company’s driverless cars were back on the streets of San Francisco on Monday after reversing its determination not to register the cars with the state’s vehicle licensing authority. “We are resuming our development operations in San Francisco this morning,” the company said on Monday.

Astronaut Tim Peake has thanked a 17-year-old schoolboy who spotted an error in NASA data and emailed the space agency to let them know.

Miles Soloman from Sheffield was studying the TimPix project, which lets schoolchildren download data recorded by radiation detectors on the International Space Station during Tim Peake’s six-month mission on the ISS. When Soloman sorted the data, he spotted a problem: “I went straight to the bottom of the list and went to the lowest bits of energy there were,” he told the BBC.

“I noticed that where we should have no energy, there was no radiation – it was actually showing -1. The first thing I thought was ‘well, you can’t have negative energy’, and then we realised this was an error.”

NASA said they thought they had corrected for the error and that Soloman’s correction was “appreciated more so than it being embarrassing”.