...you'll help her get $5 closer to a new car, that's what! Here's how to avoid this and other ridiculously easy Tinder scams. Falling in love online? Don’t get caught out by the Tinder scammers – Naked Security
Skip to content 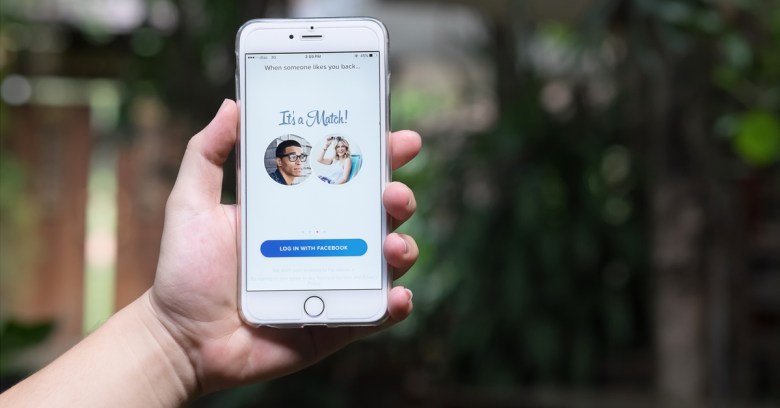 Were you one of the guys whose heart was pureed by Ava, the doe-eyed artificial intelligence bot put on Tinder as a movie marketing stunt at SXSW?

That was two years ago. You’ve probably scraped your pulp back together by now.

But don’t let your guard down just yet: an actual human woman has come up with a Tinder scam that’s so much simpler than that whole “What makes you human” AI chitchat.

In fact, the new scam is so much simpler that, honestly, you can’t even call it a scam.

Maggie Archer, a 20-year-old student from St Louis, Missouri, has found what she considers the best possible use for Tinder: just asking guys to send her money. That would be $5, to be precise.

At one point, she was pulling in up to $100/week. Archer told BuzzFeed that a friend had suggested that she put her pitch into her profile, so it wasn’t even a direct ask.

Send me $5 and see what happens

Oh, the curiosity! Oh, the potential! What happens, indeed?!

Well, what happened, to lusty lad after lusty lad, after they had sent $5 to Archer via PayPal, was that she’d unmatch them. Goodbye, sucker, *SWIPE!*

It was too good not to share, she said:

The best possible use for tinder pic.twitter.com/bYs49yEds6

Plus, she figured she was inspiring sisters, which she probably was, given feedback like this:

Is it a scam? Well, no. After all, Archer didn’t promise anybody anything. All she did was stoke their imaginations. Therefore, there was nothing fraudulent about her pitch.

Archer said that she decided to give it a go, mostly as a joke. But then, hey, the money started to flow “almost immediately”.

Archer told BuzzFeed that it worked with about one out of every five guys who asked about her profile. One match sent her $10. And then there were the men who wanted to offer her a whole lot more:

Some men get creepy and assume if they offer a lot more, like hundreds, something will actually happen, which of course it doesn’t.

Any users doing so would be removed from the platform, added Tinder, noting that Archer’s account has been shut down.

In fact, Archer had already deleted the app, given that “the whole purpose for doing this was defeated”, presumably because her story went viral. At this point, the “see what will happen if you send me $5” mystery has been solved: you’ll lose $5.

Is that the end of the story? Oh, no. It’s just one element in a much bigger picture. Tinder has plenty of other scam flavors to tempt people’s hearts. … Or other bits of their anatomy.

Thai police have narrowed their search for the likely culprits, whom, they believe, are neither flesh and blood nor sexy Ex Machina robotic women, but rather two plain old guys who’ve stolen the Facebook profile photos from at least three Thai Air cabin crew. One of the suspects is wanted under nine arrest warrants on charges of swindling and fraud.

Two of the cabin crew have filed complaints, claiming that their photos had been posted online without their knowledge to swindle money from at least 30 men. The swindlers allegedly kept up online relationships with their marks, avoiding meeting one victim by claiming to be busy with overseas flight duties.

One day, “she” told the victim that she’d lost her credit card and asked him for a loan of 15,000 baht ($436, £350). After he transferred the funds, “her” tone grew distant, and he realized he’d been had. Police have reportedly also found victims who’ve been snookered into transferring millions of baht to the suspects between 2014 and last year.

A lover and his money are soon parted

It’s tough to resist the allure, but there are a few tools that can help us avoid falling into these traps:

1. Skepticism. We can’t say it often enough: people you don’t know are strangers, and they’re not always who they say they are. There are so many cases where imposters have targeted kids, such as the paedophile who posed as Justin Bieber, or the 22-year-old from New Jersey who posed as a teenager to stalk girls online.

Adults have their own flavors of lying sleazebag fraudsters: cybercrooks who prey on vulnerable love-seekers on dating sites; who convince them they’re sending money to needy soldiers; who send bogus emails claiming you’ll get a payment just as soon as you first pay a “shipping agent” (what’s known as “advance fee fraud“); or by voluptuous women who, strangely enough, are forced to find love online – presumably because Russia is fresh out of men who like those buxom blondes.

2. The ability to perform an internet search. You don’t have to be a genius to do a simple search to educate yourself on online scams, or online dating scams, or romance scams, like Rebecca Lewis did when her fiancée fell for “Kristen”: the 26-year-old daughter (ha!) of a Californian millionaire (double HA!). Bear in mind that you’re well-advised to run a reverse image lookup search on the photo of somebody who seems to good to be true.

You could well find a faker’s photo posted on sites devoted to exposing the fraudsters who use the same images over and over – typically, images that were stolen from elsewhere.

If you’ve got a friend/relative/whoever who’s blinded by love or lust, try quizzing them on whether their online lover has any of these attributes of sweetheart swindlers, provided by the FBI:

Try to pierce that hubba hubba haze, and let the cold shower of reality come raining on down!

3 comments on “Falling in love online? Don’t get caught out by the Tinder scammers”