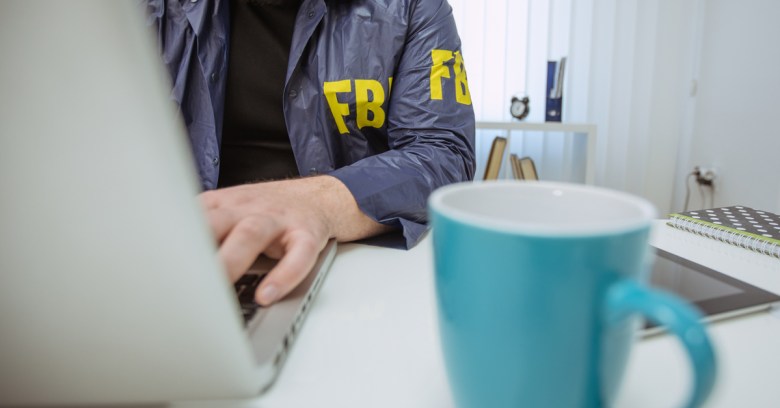 When Best Buy customers need to retrieve lost data, stores from around the US send their computer equipment to a giant Best Buy repair shop in Brooks, Kentucky, for its Geek Squad techs to work on…

…and, apparently, to search for child abuse imagery on behalf of the FBI.

Unbeknown to customers, recent federal court documents claim, the Geek Squad techs have been in a “cozy” secret relationship with the FBI, which over a few years has trained and paid them to search for child abuse imagery on computer equipment. Geek Squad employees have gone so far as to search unallocated space on hard drives – ie the place where forensics specialists use specialized software to find and retrieve deleted files.

That’s what happened to Mark Rettenmaier, a California gynaecologist, who took his HP Pavilion computer to Best Buy for repair in 2011 because it wouldn’t boot. When Geek Squad techs ran a search, they retrieved a deleted image of a young girl.

His house was subsequently searched, and Rettenmaier was indicted in November 2014 by a federal grand jury on two counts of possessing child abuse imagery.

But as the case has dragged on and documents have come to light, it’s looking like that image – and others like it – might not be permissible as evidence, given that the Geek Squad employees are accused of acting as government agents.

Their relationship is so cozy and so extensive that it turns searches by Best Buy into government searches. If they’re going to set up that network between Best Buy supervisors and FBI agents, you run the risk that Best Buy is a branch of the FBI.

Whether or not Geek Squad City technicians acted as government agents by accepting FBI payments, regularly speaking with FBI agents (on a first-name basis) and referring cases to them over the course of a few years, and working with them to create a program to search for abuse images, is core to determining whether their searches are permissible as evidence.

That’s because government agents need to first get a warrant, based on probable cause, to search a computer. Otherwise, Fourth Amendment issues around search and seizure come into play, as does the question of privacy violation, potentially turning Geek Squad technicians’ scouring of computers into warrantless searches by law enforcement.

According to the court documents in USA v. Mark Rettenmaier, the FBI has been paying Best Buy supervisors for the work, and management has been fully aware of it. The bureau has also been guiding Geek Squad technicians as they develop a program to find abusive content.

The court records don’t give many details on the frequency or amount of the payments, but according to documents and testimony, the FBI paid a number of Geek Squad employees $500 or $1,000 for the work.

The Geek Squad supervisor who alerted the FBI to the photo, Justin Meade, has denied being paid by the FBI, though prosecutors have acknowledged that the FBI paid Meade $500 in October 2011: two months before his co-worker found the photo.

According to a judge’s order, defense lawyers found that the FBI had cultivated eight “confidential human sources” in the Geek Squad between October 2008 and November 2012, with all of them receiving some payment.

The government is facing multiple problems with its case against Rettenmaier. As pointed out by the journalist who first wrote about the court case – Orange County Register’s R Scott Moxley – a few weeks before Rettenmaier was arrested, federal judges ruled in a separate case that child abuse images found in unallocated space couldn’t be used to win a possession conviction, since there’s almost no way to figure out who put them there, who viewed them, or when/why they were deleted.

FBI agent Cynthia Kayle knew that Geek Squad informants had found the image in unallocated space: a fact that, Riddet claims, the FBI failed to tell a magistrate judge who gave the investigation the go-ahead. Riddet is also claiming that the FBI falsified an official timeline to hide warrantless searches.

On Monday, Best Buy provided the Washington Post with a statement that denies the relationship between the FBI and the Geek Squad. Any employee(s) who got paid did it on their own accord and according to their own bad judgment, Best Buy said:

Best Buy and Geek Squad have no relationship with the FBI. From time to time, our repair agents discover material that may be [child abuse imagery] and we have a legal and moral obligation to turn that material over to law enforcement. We are proud of our policy and share it with our customers before we begin any repair.

Any circumstances in which an employee received payment from the FBI is the result of extremely poor individual judgment, is not something we tolerate and is certainly not a part of our normal business behavior.

At this point, a federal judge is allowing defense attorneys to probe the relationship between Best Buy and the FBI at a hearing in Los Angeles starting on Wednesday. A trial is tentatively scheduled to begin on June 6 in Santa Ana.