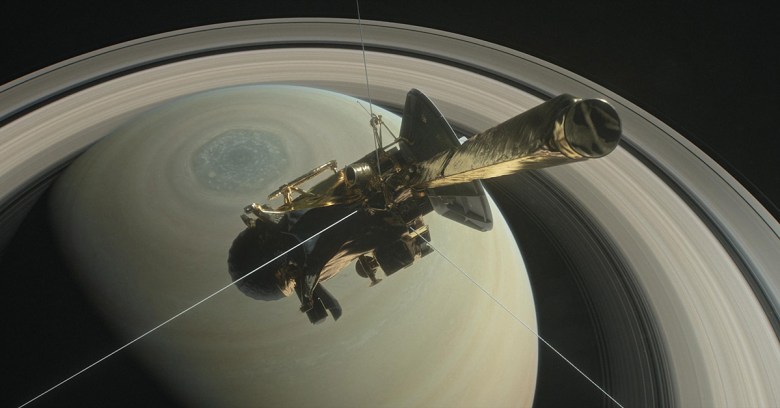 Spacecraft to crash into Saturn

Two decades after its launch, NASA’s Cassini probe is being prepared for the final part of its journey before it’s deliberately crashed into Saturn. Launched in 1997, the probe arrived at Saturn in July 2004, and has spent the past 13 years exploring the planet, its rings and its 62 moons.

NASA scientists said this week that as part of its Grand Finale, the spacecraft will on April 22 dive between Saturn’s upper atmosphere and its innermost ring 22 times before crashing into the planet’s surface and being destroyed.

The aim is to prevent it crashing into and contaminating one of the planet’s moons where there could be conditions for alien life. Enceladus in particular fascinated NASA: Cassini found that the moon has an underground saltwater ocean that could have hydrothermal vents of the kind that are thought to have been the spark for life on Earth.

“Cassini’s own discoveries were its demise,” project manager Earl Maize said. “We cannot risk an inadvertent contact with that pristine body.”

The ban on using laptops and tablets in the cabin of aircraft heading to the US might be extended, Homeland Security secretary John Kelly said on Wednesday.

Speaking at a congressional hearing on homeland security, Kelly suggested that the current ban, which covers 10 airports in eight countries, doesn’t go far enough in response to the threat of terrorism.

He told the hearing: “It’s real. I think it’s getting realer. We may take measures in the-not-too-distant future to expand the number of airports,” though he gave no indication of where those airports might be.

The UK rolled out a similar ban at the same time, and other countries including Canada are said to be considering a similar bar on portable devices in the cabin from some airports.

Facebook users will start to see the social media giant’s tool to help them spot fake news as part of its measures to crack down on “false news and hoaxes” that are “harmful to our community and make the world less informed”.

Clicking on the ad that appears at the top of your feed if you’re in one of the initial 14 countries will take you to the help centre’s list of 10 tips to help you spot a dodgy story. Those tips include warnings to look closely at the story’s URL and being sceptical of catchy headlines.

Meanwhile, German lawmakers agreed a plan on Wednesday to fine social networks including Facebook up to €50m if they don’t take down hateful posts quickly enough, Reuters reported. The proposed legislation also provides for fines of up to €5m for individual executives if hate speech and fake news aren’t taken down quickly enough.

Justice minister Heiko Maas said: “There should be just as little tolerance for criminal rabble-rousing on social networks as on the street.”