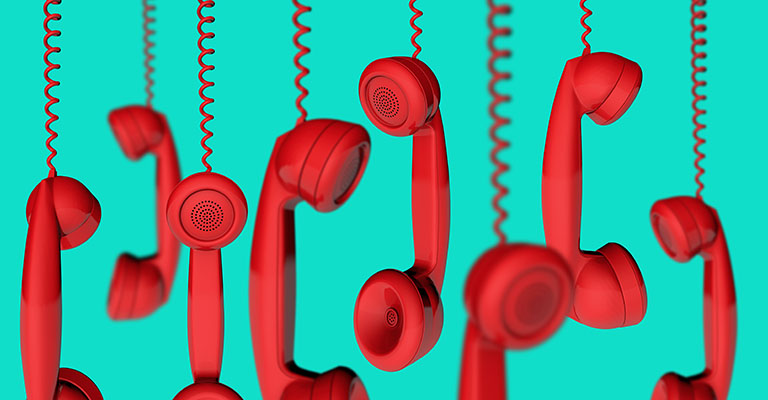 As in, the one that Congress cut the funding for in 2014? The one that wasn’t authorized by Section 215 of the Patriot Act after all, as a court unanimously ruled in 2015? … but which got extended anyway?

Boy, did it get extended, and how. It’s still chugging along just fine.

In fact, the National Security Agency (NSA) collected 151m records of Americans’ phone calls last year, even though it had warrants to collect the data on only 42 suspected terrorists.

The information comes from a transparency report from the office of Dan Coats, the director of national intelligence. The purpose of the report was to measure the effects of the 2015 USA Freedom Act.

That’s the act that was supposed to clip the NSA’s surveillance powers.

Signed into law in June 2015, the act was interpreted by some as a significant scaling back of national security policy formed after the 11 September 2001 terrorist attacks, while others said it was at least a good first step in that it meant the NSA would be slightly inconvenienced in its spying and there would be a smidgen more accountability and transparency for it and the Foreign Intelligence Surveillance Act (FISA) court.

At any rate, the Freedom Act was supposed to limit the NSA to collecting phone records and contacts of people whom intelligence agencies here in the US and in allied countries suspect may have ties to terrorism.

Well, those 42 terrorism suspects must have a lot of people in their address books, to spark surveillance on 151m targets, right?

No, no, no, emphasizes the transparency report. Some of the “identifiers” that get into the count are redundant, while some targets are holdovers from 2015. 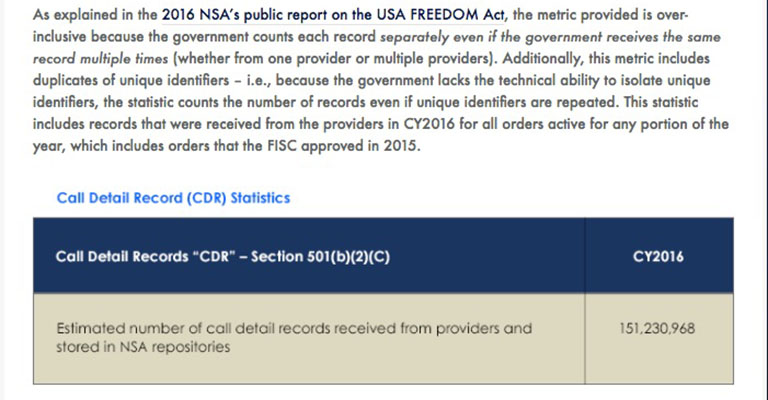 It’s got to do with the “hops”: for example, if a target phone number calls another phone number, that’s one hop. If the target calls that same number again, each call counts as an additional record. So if a target called a given phone number once a day for a year, it counts as 365 records that the NSA gets from a phone service provider. Then too, another phone service provider might provide the same records, and they too get added to the overall count.

Officials said that they don’t have a breakdown of how many individuals’ phone records are represented in that 151m.

The Office of the National Director said in the report that the names of 1,934 US people were unmasked last year in response to specific requests, down from the 2,232 people unmasked in 2015. It didn’t give details of who requested the names, or details about the investigations.

The report comes as Congress grapples with the decision of whether to reauthorize FISA Section 702: the one that allows for surveillance of foreign, non-US targets without a warrant. It’s due to expire at the end of the year.

Privacy groups have called FISA unconstitutional: it’s a statute that “violates the Fourth Amendment because it permits the government to conduct large-scale warrantless surveillance of Americans’ international communications – communications in which Americans have a reasonable expectation of privacy,” the American Civil Liberties Union (ACLU) says.

In other words, it allows the NSA to sidestep the need to get warrants from the Foreign Intelligence Surveillance Court (FISC) in order to eavesdrop on Americans’ internet and phone conversations.

In fact, the transparency report mentioned one occasion in 2016 when the FBI collected intelligence on an American while running a search of Section 702 data that was going after evidence of a crime unrelated to foreign intelligence.

The NSA said at the end of last week that it will no longer collect certain internet communications that merely mention a foreign intelligence target. That’s called “about” information in Section 702.

The NSA is also planning to delete “the vast majority” of previously acquired “upstream” internet communications ASAP, it said.

All this data’s above and beyond what the government is legally required to give us, says the Office of the Director of National Intelligence. Spokesman Timothy Barrett:

This year’s report continues our trajectory toward greater transparency, providing additional statistics beyond what is required by law.

One comment on “NSA kept an eye on 151m phone records – but wait, didn’t bulk collection stop three years ago?”