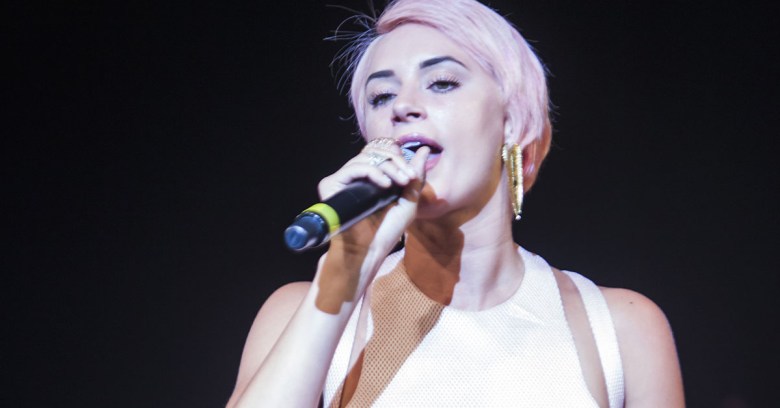 A Miami judge on Wednesday ordered a reality TV star to unlock her iPhone in a case that’s yet again firing up the legal debate around when we can be compelled to give up our passcodes.

The star, Hencha Voigt, has been charged with conspiracy to extort a social-media celebrity known as the “Queen of Snapchat”. The target of the alleged extortion was South Beach socialite YesJulz (pictured), whose real name is Julieanne Goddard. She’s a party promoter and online marketer who hangs with rappers and athletes and boasts hundreds of thousands of followers, according to her publicist.

According to the Miami Herald, prosecutors claim that Voigt, 29, and her accomplice – Wesley Victor, 33 – last year demanded $18,000 from YesJulz in exchange for not leaking her sex videos.

Prosecutors say that the footage was on YesJulz’s own phone, which disappeared while she was at a party that Voigt also attended.

Voigt claims that she’d been targeted by an extortionist herself, and she was calling just to warn her friend, YesJulz, about it. Voigt allegedly went so far as to send screenshots and clips of the videos that had been taken from YesJulz’s lost (or stolen) phone.

In July 2016, Voigt allegedly told Simmons that the extortionist would use a “trap” phone to demand money. Court documents quote a text message Voigt wrote to YesJulz:

U give them the money… And they don’t so something w it.

you can have them back as I said you dope chick. I like your movement look if I feel any fun business game over your choice

A police report seen by the Miami Herald says that Victor and Voigt allegedly gave YesJulz a 24-hour deadline. Still, the videos wound up leaked to the internet after the two were arrested.

At this point, the text messages between the pair are locked away on Voigt’s iPhone and Victor’s Blackberry, both of which were seized during their arrest.

Voigt and Victor have two weeks to decide whether they’ll hand over their passcodes. If they refuse, they could be jailed for contempt of court.

According to the Miami Herald, prosecutor Michael Filteau told the judge that “the law here is clear,” but that’s just wishful thinking. US courts have been more wobbly than clear when it comes to whether revealing passcodes amounts to self-incrimination.

They have no idea if there is any evidence on the phones.

We know of at least one court case in which police did have solid reasons to believe that evidence was locked away on hard drives that a child abuse suspect refused to unlock. In April 2015, a 17-year veteran and former sergeant of the Philadelphia Police Department suspected of possession of child abuse images had been found in contempt of an order to decrypt two hard drives.

Police hadn’t been able to find the images themselves on the seized Mac of the “John Doe” defendant, but they did find evidence of Doe having allegedly downloaded thousands of files with the telltale hash values of known child abuse images. Investigators presumed that those images had been downloaded to the external drives.

Doe has argued that he’s not in contempt of court because being forced to reveal his password violates his Fifth Amendment protection against self-incrimination. But in August 2015, a magistrate judge said that Doe’s decrypting his devices couldn’t be considered testimony against himself, because given the telltale hash values, the government already knew that there would be child abuse imagery on the devices.

Where are the hash values that show that Voigt’s and Victor’s phones have evidence of extortion? Well, there aren’t any, as Bozanic pointed out. There are established technologies to fingerprint digital images when it comes to child abuse, but it’s a whole other ball game when we’re talking about text messages. The defense attorney was likely right: the police probably have no evidence that Voigt’s iPhone and Victor’s Blackberry contain the text messages that investigators suspect may be on the devices.

That doesn’t mean the government can’t get around the suspects’ refusal to comply with the order to unlock, mind you, if they do in fact refuse to do so.

We learned that during the FBI’s drawn-out court battle to force Apple to unlock the iPhone of San Bernardino terrorist Syed Farook. The FBI eventually backed off after the bureau managed to get past iOS encryption with the help of a third party.

That, in turn, led to Apple saying, basically, that it sure didn’t look like the police needed any help to get into the locked iPhone belonging to an alleged methamphetamine dealer in a separate New York case.

At any rate, yes, the police certainly have the technology to get around suspects’ refusal to unlock, regardless of the courts’ wavering interpretation of Fifth Amendment rights against self-incrimination in cases of forced unlocking.

One comment on “Celebrity ‘extortion’: judge orders reality star to unlock her iPhone”