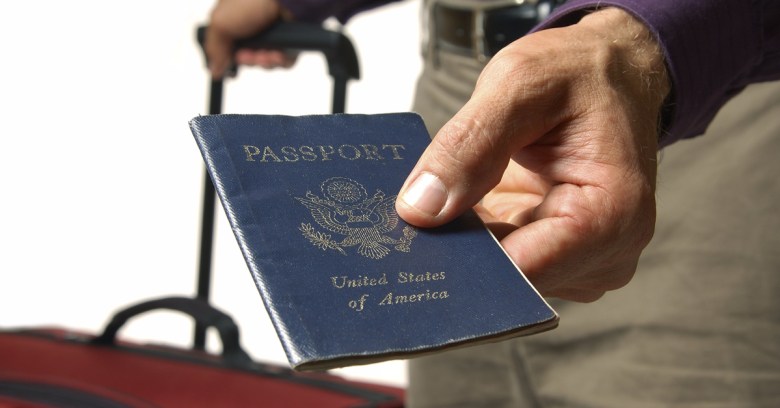 In February, artist Aaron Gach flew home to San Francisco after putting on a gallery installation in Brussels.

Given that focus, depending on your attitude toward law enforcement and surveillance, it might seem ironic – or fitting – that US Customs and Border Patrol (CBP) decided to interrogate Gach, to detain him, and to demand that he unlock and hand over his phone.

After suggesting (to no avail) that he was a natural-born US citizen who had the same constitutional rights outside and inside border zones, he eventually gave up and handed over the device. Gach had hoped that, if he complied, the agents would be true to their word and refrain from detaining all his other belongings, including his laptop.

As Gach described in an account of the February 23 detention and search, the agents had a number of questions (some of which they asked, repeatedly, in spite of having Gach’s passport open in front of them), including, allegedly:

What’s your name? Can you spell that? Are you traveling by yourself?

As time went by, the questions grew more detailed, prying into contact information for others associated with the show:

…leading up to this pivotal question:

Can we check your phone to verify the info you provided?

At that point, Gach began asking his own questions. Make that a lot of questions, plus a request to see the written policies authorizing the agents’ actions. A few of Gach’s questions:

What is it you want to check on my phone?  Is it something in particular that I can just show you? Do I have a choice in the matter? What are my rights in this situation? As a US citizen, don’t I have equal protections under the Constitution regardless of whether or not I am in an airport or outside of one?

The answer to that last one was delivered in a manner just as casual as the previous questions, but that cordiality was tucked around a threat:

I understand your concerns, and I’m hoping we can get you on your way as soon as possible. Of course you have a choice, but we can also be dicks and just take your phone as part of our investigations if we see fit.

Of course, it’s fruitless to try to surmise the actions of CBP detentions. The CBP isn’t in the habit of sharing whatever possibly reasonable suspicions they might have about a traveler that would lead agents to detain that traveler.

But we are now in an era of skyrocketing device searches at the US border, and there are many who would very much like to dissect the reasons – and the constitutionality – of this type of search. As the American Civil Liberties Union (ACLU) notes, the Department of Homeland Security (DHS) has estimated that CBP officers searched 2,700 devices in January and 2,200 in February alone, putting it on pace to easily exceed the 19,000 devices they searched in all of 2016.

On Thursday, the ACLU took action on behalf of Gach and others who’ve been subjected to similar non-consensual searches at the border. Six ACLU attorneys filed an eight-page administrative complaint, seeking answers from DHS, the parent agency of CBP.

According to the ACLU, after Gach unwillingly acquiesced, unlocked his iPhone and handed it over, CBP officers took it behind a dividing wall, out of view for almost 10 minutes, and thereby violated Gach’s constitutional rights.

The rights group says that searches at the borders have to comport with the Fourth Amendment, which prohibits unreasonable searches and seizures. The ACLU says that Fourth Amendment protection of privacy rights of a cellphone were made clear in Riley v. California, a landmark 2014 case in which the Supreme Court unanimously held that the warrantless search and seizure of digital contents of a cellphone during an arrest is unconstitutional.

CBP had no reason to search Gach’s phone, the ACLU says, nor his cloud-based data:

In Aaron’s case, CBP already had his US passport and other documents proving his admissibility to the United States. Given that border agents lacked any apparent suspicion that his phone held contraband, the grounds for the search simply didn’t exist. And since Aaron’s cloud-based data wasn’t being transported across the border – but is accessible wherever there is internet access – it was well outside CBP’s authority. As a result, the suspicionless search of Aaron’s device was unjustified and unconstitutional.

Similar searches have been conducted with other US citizens, including US-born NASA scientist Sidd Bikkannavar, who was detained at the border in February and forced to unlock his NASA-owned work phone.

In the US, it’s commonly said that borders constitute a “Constitution-free zone”. That’s not strictly true, as the ACLU has noted, but the search rules certainly are different.

At border crossings (also called “ports of entry”), federal authorities do not need a warrant or even suspicion of wrongdoing to justify conducting what courts have called a “routine search”, such as searching luggage or a vehicle.

The ACLU rejects that attitude, and it’s working on CBP to force it to change its practices and policies to reflect the fact that borders are not Constitution-free. Beyond the administrative complaint it filed on Thursday, it also submitted a Freedom of Information Act request to CBP demanding information about its compliance with a 2013 appeals court decision that imposes limits on device searches.

Also, in April, the ACLU filed an amicus brief in federal court arguing that the government must obtain a warrant, or, at a minimum, have probable cause to conduct these searches. It also supports a bill by Senator Ron Wyden (D-Ore.) that would block warrantless searches on Americans’ phones at borders.

Will any of those actions help to answer the question of why Gach was singled out?

He’s been getting asked that question a lot, but Gach thinks it’s the wrong question to ask:

First of all, any response is supposition at best. The CBP gives absolutely no indication as to why you are being screened. Secondly, it is deeply problematic to ask individuals who were interrogated to further scrutinize themselves and to suggest what aspects of their personal lives they consider to be justifications for government intrusions on their privacy… it should be readily acknowledged that this question places on unfair burden on people, especially if they are members of more vulnerable or targeted communities.

And in case you’re wondering whether Gach had something to hide, here’s the answer he gave when a CBP agent asked why he didn’t want to turn over his phone:

I believe strongly in the Constitution and in my right to privacy. I have nothing to hide but the only way I know if I actually have any rights is if I try to exercise them.

In his Google document, Gach has provided afterthoughts on his 90-minute encounter with the CBP. They’re well worth a read, containing tips on how other travelers can protect their own data. Here are a few: