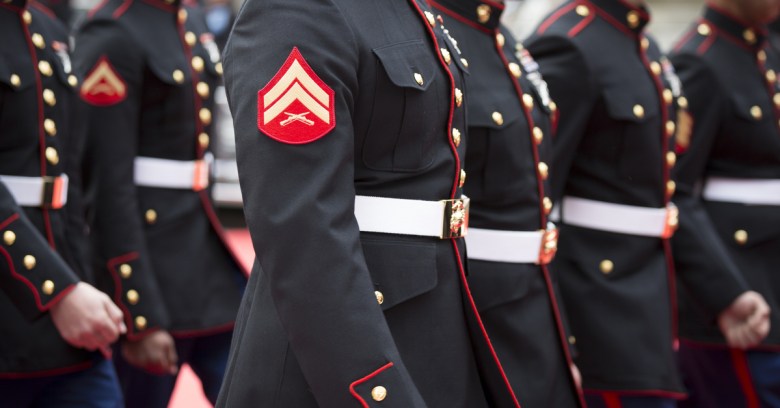 Word to the wise: doing an image search on “uniformed military nude” (holy mother of NSFW!!!) turns up a whole lot of material.

In fact, it turned up 80m hits, as the US Marine Corps found out when investigating a Facebook group for servicemen to swap nudes of female colleagues.

At this point, there are 20 investigators, eyeballing screens full of naked servicemen and -women, crammed elbow to elbow in an office at the Marine Quantico base outside of Washington, working up to 10 hours a day to find images that break the law.

The work is exhausting. Where do you even start to look through that enormous collection? Andrew Traver, director of the Naval Criminal Investigative Service (NCIS), told The Associated Press (AP) that the Marine Corps had to turn over the staff after the first month due to burnout:

If you do that eight to 10 hours a day, five days a week, you get pretty burned out,. [We had to get new agents in] just because of the burnout factor, especially the ones that are doing the image review.

Exhausting, but extremely productive. The investigative team, dubbed Task Force Purple Harbor, has evolved from initially being a response to the Facebook group to a growing criminal investigation that now encompasses 21 felony cases. Another 30 cases have been referred to Marine higher-ups for possible administrative action. The AP didn’t have details on repercussions for the individuals involved but reports that five have received administrative punishments so far.

In response to the scandal, the Navy and Marine Corps last month put out a new regulation that made it illegal to post nude images of service members without their having consented to the disclosure.

The investigation is “broad and gruelling”, the AP says. It includes agents from all four military services plus the Coast Guard, and they’ve been scouring close to 200 websites. They’ve found 150,000 nude or semi-nude images – more than half of whom are of men – and have identified 20,000 with a possible military connection.

What complicates the investigation is that most of the images aren’t illegal. That’s because most are shared voluntarily, and under military code, selfies or voluntary sharing of nude images is permissible. The illegal images are those associated with a crime: ie, images that have been used for extortion, those that have been taken surreptitiously, or those stolen or hacked out of people’s devices.

Besides the 21 felony cases, the investigators have found another 16 suspects – nine active-duty Marines, two reserves, three Navy sailors, one Navy reserve and one civilian – who may have been involved with stalking, extorting, and/or threatening victims over nudes or personal photos stolen from their devices.

The two-month investigation has resulted in NCIS cyber experts coming up with new tools and software to help quickly analyze photos by stripping all the data from a website, zeroing in on whether photos include military uniforms, and determining the gender of an image’s subject and whether the photo was shared with consent. The new tools have shrunk the analysis process per photo from 40 seconds down to between five and 10 seconds.

Another tool that’s being put into use is facial recognition. More than a dozen military members, mostly women, have asked the task force whether any of their intimate photos wound up on what are largely private sites without their consent. Facial recognition has helped match up four potential victims, one of whom confirmed that a photo was of her, and another three that are still getting checked out.

But in spite of the use of new and existing technology, it’s still a cat-and-mouse game to catch perpetrators. As it is, the photo-swapping groups are private. Similar to sites where child abusers share abuse imagery, the groups often charge a joining “tax” of an offending photo, knowing full well that law enforcement can’t legally supply one. Even if the sites don’t require an offending photo to join, the investigators soon get booted out because they don’t share images.

Curtis Evans, chief of the NCIS criminal operations division, told the AP that the groups have a few memes they use to taunt the investigators: one such is a gorilla wearing an NCIS hat with a sign saying “add me”. Others, he said, mimic Facebook pages, advertising that they’re open to “Friends and NCIS” or “Only Media and NCIS”.

Just what, exactly, is Facebook’s role in whacking these whack-a-moles and keeping them from launching 2.0 and 3.0 versions, again and again, as did the original Facebook site, Marines United?

Rolling Stone has a comprehensive report on the two marines who kept after Facebook after one of them initially discovered Marines United, monitored it, and spent over a month, near-daily, reporting offending images and groups.

A former marine, Erin Kirk-Cuomo, runs a Facebook group Not in My Marine Corps as a support network for women affected by Marines United.

You said in your book [“Lean In”], ‘We cannot change what we are not aware of, and once we are aware, we cannot help but change.’ I am making you aware.

If we’re going to build a safe community, we need to respond quickly. We’re working to make these videos easier to report so we can take the right action sooner – whether that’s responding quickly when someone needs help or taking a post down.

Rolling Stone spoke with Mary Anne Franks, a legislative and tech policy director at the Cyber Civil Rights Initiative, who said that the secret to preventing non-consensual pornography is keeping it from being uploaded in the first place, before those images go viral and the resulting shaming and bullying come into malignant flower. Think about it: how can you report an offending image to Facebook if you’re not aware it’s been posted?

Because the problem with all of these measures is you have to rely on the victims themselves or someone who might be looking out for the victims to report this content.

As for John Albert, the 30-year-old retired marine who discovered and reported Marines United in the first place and has worked to get the pages permanently removed, he’s now a target in the military community. He’s ridiculed on Facebook and gets death threats.

They said they were going to come shoot up my house. Mentally I’m treating this just like Afghanistan. When you go to war you have to be realistic and fatalistic about all the possibilities, and that’s what I’ve been doing about all the bad feedback.

Albert remains undaunted. He knows the difference between protecting your country and threatening it, he says:

In the military, we’re supposed to be the people who put our lives on the line to protect our country. But when you become a predator – you’re not protecting your country anymore, you are someone this country needs protection from.