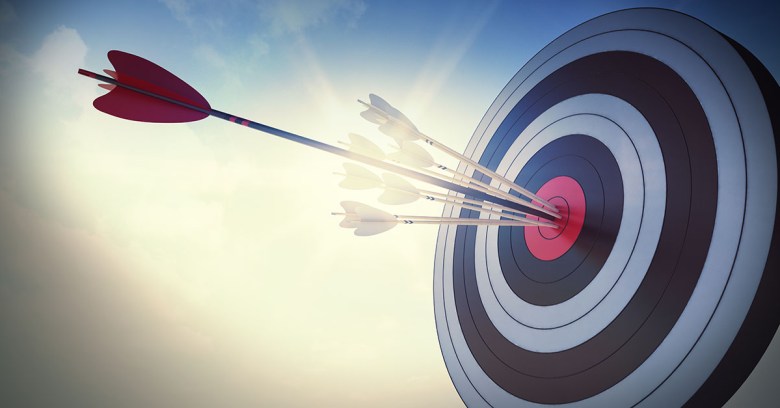 Sound familiar? That’s what the US retailer’s tagline is supposed to say.

As opposed to “All Products In One Place”, the tagline glued to a malicious ad that managed to squirm its way to the top of Google search results for Target and then to redirect visitors to a tech support scam.

According to Bleeping Computer, the dodgy campaign was spotted on Friday by a US user who posted his observations to a StackExchange thread.

The user said that a coworker had searched for “Target”, clicked the top result – which was an ad – and was redirected to a phishing page that was rigged up to look like a Microsoft tech support page that wanted him to call a “tech support number”.

The user tried it on his own computer, on a different network, and got the same results. Curiously, hovering over the link should have shown where it really went to, but in this case, it did no such thing, he said:

When I hover over the link, both links show “www.target.com” at the bottom, but clicking the ad link takes you to a malware page and the second link (first search result after the ad) takes you to the real Target.com page. 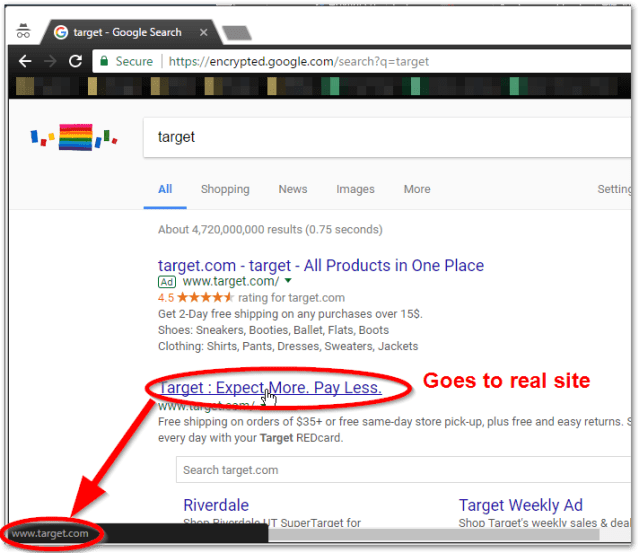 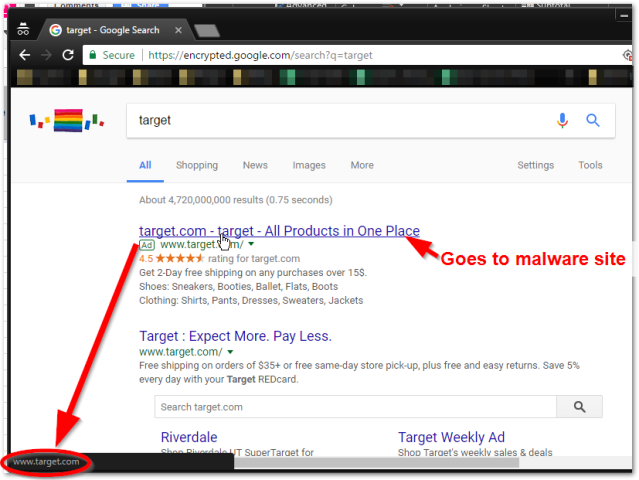 The malicious ad took advantage of a feature of the Google Ads service that allows ad publishers to display one URL but redirect users to another link.

In the bogus tech support ad, the displayed link was target.com but users were redirected to tech-supportcenter.us.

How did that get past Google’s ad quality control service? As the company explains, it allows redirects within the same domain, but cross-domain redirects are forbidden and will result in ad disapproval.

The idea is to allow companies to use proxy pages: as in, exact copies of live, functioning websites used in place of the original site, for the purpose of isolating advertising traffic from all other website traffic.

Such proxies are hosted on a separate domain from the original site (and may contain a different business phone number), but because they provide the same user experience as the original site, they’re permitted to use the original website as the display URL.

Users who clicked on the rogue Target ad might have expected to get more and pay less, but what they got instead was your typical scam, made to look like a Microsoft support page. The scammers were urging users to call a phone number to remove a non-existent “HARDDISK_ROOTKIT_TROJAN_HUACK.EXE” file. 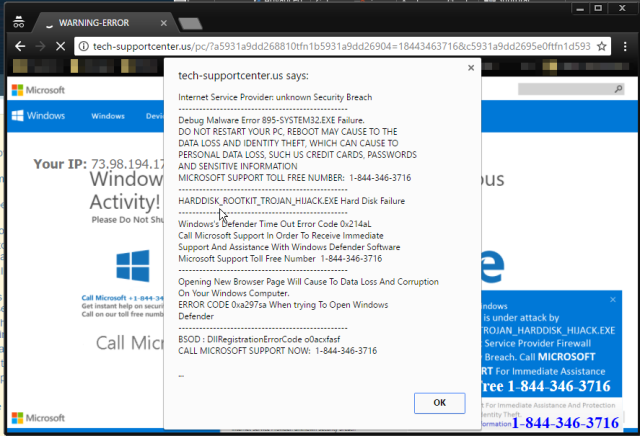 As a StackExchange user pointed out, Google has strict destination requirements for ad links. Ads have to accurately reflect where the user is being directed, and Google disallows redirects from the final URL that take the user to a different domain.

But there are loopholes, including that Google doesn’t control third-party redirectors, and those redirectors can go rogue. An example of an allowed redirect is a company, such as an AdWords Authorized Reseller, using proxy pages.

And then there times when those redirectors go bad. An example, from StackExchange:

After Google has vetted and approved their ads, [third-party redirectors] could simply start redirecting to a different domain without immediately getting noticed by Google. It’s possible that, in [this tech support scam] case, attackers managed to compromise one of these third-party services and pointed their redirects to the scam site.

We’ve seen this happen recently: In February, a bad ad perfectly spoofed to look like a legit Amazon ad sent anybody who clicked on it to a Windows support scam.

We’ve also seen the same type of scam via a Walmart ad, according to user complaints:

came across this same scam on Walmart ad. Lots of scams and clickbait on Google these days.

Bleeping Computer reports that the malicious Target redirect ads aren’t up anymore, and the tech support site is also down.

If you want to avoid rogue, Google-thwarting ads like this one that sneak up to the top of search results and then fling visitors into tech scam land when they click, the first tip is a no-brainer:

2 comments on “Google ads for tech support scams – would you spot one?”