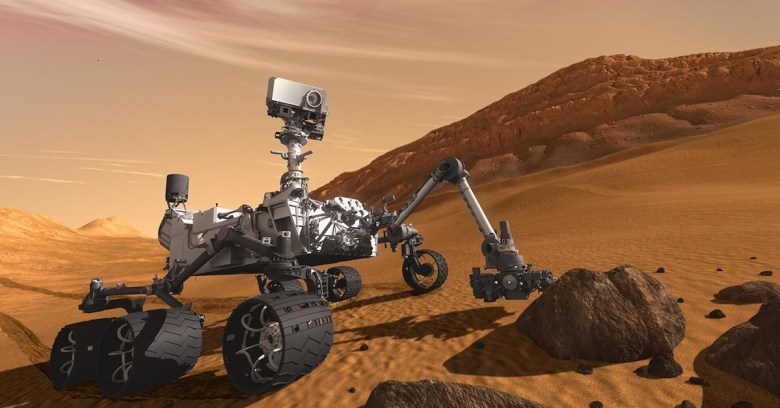 We are increasingly used to self-driving vehicles and machine learning here on Earth, but now AI is helping an autonomous vehicle on Mars, too.

Curiosity Rover, the exploratory robot that landed on the Red Planet back in 2012, has been getting on with its mission of analysing rocks with direction from back on Earth – but now it’s increasingly choosing which rocks to analyse without any input from the home planet.

The AI software – Autonomous Exploration For Gathering Increased Science, or Aegis – has been rolling out for the past year, and has helped the robot pick which rocks to zap with its lasers for analysis. That “allows the rover to get more science done while Curiosity’s human controllers are out of contact”, said NASA on Wednesday.

The software means that if Curiosity gets to a new area before it can receive instructions from its humans, it can choose which rocks to zap for the scientists to examine later.

“Time is precious on Mars. Aegis allows us to make use of time that otherwise wasn’t available because we were waiting for someone on Earth to make a decision,” said Raymond Francis of NASA.

WannaCry, the ransomware that paralysed the UK’s National Health Service, among other organisations, last month, is still causing grief, with the latest outbreak hitting traffic cameras in the Australian state of Victoria.

Australia’s 3AW693 radio network reported that some 55 cameras had been infected, with local law enforcement authorities responding that “a system patch has been applied, which prevents the spread of the virus”, and added that the outbreak had apparently been caused by connecting “infected hardware” to the cameras.

Local authorities added that the accuracy of the cameras hadn’t been hit, but said that if any motorists had been wrongly fined because of the outbreak, their fines would be withdrawn.

Bug hunters, Microsoft has extended its bug bounty program for its Edge browser, having paid out more than $200,000 over the past 10 months.

Microsoft said in a blog post that the “collaboration with the research community has resulted in significant improvements in Edge security” and as a result, they are changing the Edge on Windows Insider Preview bounty scheme “from a time-bound to a sustained bounty program”.

Any vulnerabilities found must be reproducible on the most recent slow track of the Windows Insider Preview version of the browser, and critical remote code executions or important design issues that hit privacy or security could get a bounty, which range from $500 up to $15,000 – or possibly even more.