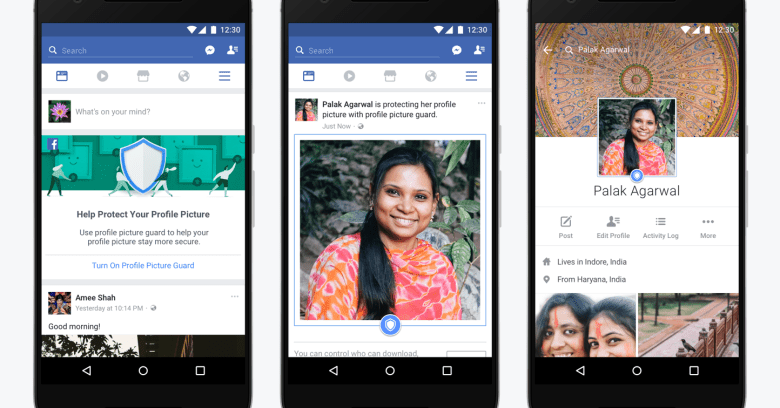 Images of sunsets? No problem. Images of their faces? In a patriarchal society with a strong tradition of modesty and a shockingly high number of uneported rapes and other crimes against women – uh, no.

Facebook’s calling the optional tools a “profile picture guard”. For users who opt in, Facebook will block downloading, sharing, or sending of their profile photo in messages. Nor will non-Facebook friends be able to tag themselves in a protected profile picture.

Is this going to stop people from grabbing a screen capture? Nope. But “where possible” – which means just on Android devices, at this point – Facebook says it will stop screenshots.

In addition, Facebook will display a blue border and a shield icon around a protected profile picture as “a visual cue of protection”. That translates into “pretty blue graphical doo-dads that offer no actual technical impediment to getting at the photos whatsoever”.

Granted, Facebook notes that its tests show that adding an extra design layer on to a profile picture leads to “at least” a 75% drop in the likelihood that somebody will copy the image. That might have less to do with the blue razamatazz, more to do with designs that illustrator Jessica Singh came up with to add to their profile picture: designs with traditional Indian dyeing and embroidery that can help Facebook determine whether a reported image has been ripped off.

Facebook product manager Aarti Soman said that during the company’s research with online safety organizations, it had heard that “some women choose not to share profile pictures that include their faces anywhere on the internet because they’re concerned about what may happen to their photos”.

And just what, exactly, has happened to their photos to lead to this fear?

As the Washington Post reports, many prominent female Indian actors, journalists and public figures have reported receiving rape threats or having their images misused. One headline from Quartz tells the tale:

From rape threats to Twitter trolls: being a woman journalist in India is tough.

Is it a good idea to protect your profile picture from being misused? Absolutely. Should Indian women – or any women, or any men, in any country, for that matter – trust that Facebook’s profile picture protection will somehow keep them safe from having their pictures harvested and abused?

Oh, hell, no. Not when those photos can still be captured by screenshot.

Besides which, who can blame Indian women for not uploading their photos? Why should Indian women be talked into being commoditized by Facebook, the many-armed god of marketing?

Why should any of us, for that matter? If you’re concerned about online security, take a note from Muslim and Indian women and don’t upload your personal information online.

Facebook says the profile picture protection tools are being piloted in India. Based on what it learns there, the company hopes to expand to other countries soon.

2 comments on “Facebook moves to protect profile pictures from scammers”