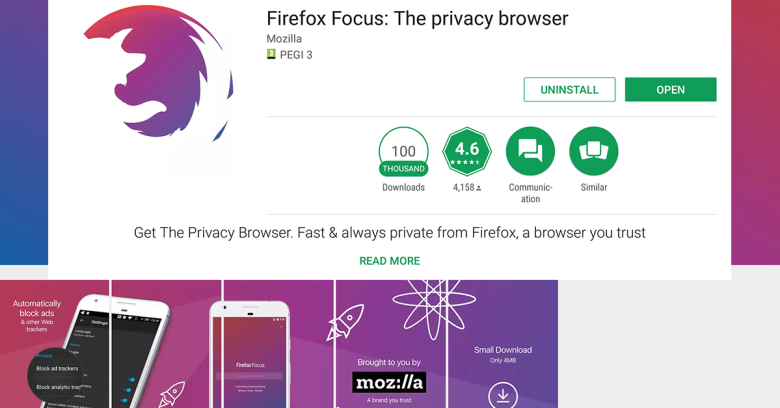 Browsing the internet without advertising what you’re looking at is no easy task. Websites and advertisers silently watch every move to build user profiles – and that’s before you get to legally required ISP monitoring on behalf of the government in countries such as the UK.

A partial shield is to use a privacy browser, an expanding and some times baffling array of which are available for desktop and, increasingly,  mobile users.

Last November Mozilla added its name to the roster with the Focus browser, an iOS app designed to run private searches without leaving a trace on the device. This has now been launched for Android users.

But don’t most browsers on desktop and mobile already have a privacy mode? And do these privacy modes amount to much anyway?

Focus does two things: it blocks ad tracking systems very reliably, which also means that it functions as an ad-blocker of sorts. This is good for privacy because websites and ad systems can’t record what users are doing, and it’s good for performance because users aren’t slowed down while these systems communicate with remote servers.

Focus, therefore, is about privacy and speed, but it is not an anonymity shield. It will stop advertising tracking and erase what was viewed on the device itself but it won’t (and was not intended to) stop ISPs from recording which websites are visited from a given IP address.

Avoiding ISP surveillance requires a privacy-oriented VPN, which might (we are speculating here) be something browser companies such as Mozilla could offer in future versions of whatever Focus evolves into.  Alternatively, you can use dedicated anonymity networks such as Tor.

The answer is simplicity, which perhaps explains its name. Lacking the ability to run multiple tabs, Focus is completely stripped down, more like a search bar than a browser. It doesn’t do a lot of the complex things a full browser does in order to do carry out the privacy function to a high degree.

This is also a way of saying that Focus isn’t really intended as a browser at all. Users simply run searches (Google, Yahoo, DuckGuckGo, Amazon, Qwant, Wikipedia or Twitter), choosing whether to block ad, analytics and social trackers.

At the end of a session, traces of activity can be deleted by hitting a trashcan icon. Clearly, running searches through Google or Yahoo doesn’t shield them from these systems but, as with anonymity mode on a conventional browser, it stops them being able to relate activity to a specific user or their history of other searches.

There are limits to this, of course, which is why for convenience you will still probably want to use a full browser to log in to a website, fill in forms or perform other forms of authentication.

In summary, Focus offers a quick and simple way to get some privacy and speed back into mobile browsing on iOS and Android and can even be configured to act as the default “browser”.

Its innovation is to break out these functions as a separate piece of software rather than embedding them inside a larger browser where they might be hidden or ignored.

With commercial and, more recently, government surveillance on the rise, and ads bombarding users on many sites, it’s not before time. It will be interesting to see whether Mozilla can take the next step and embed a reliable privacy VPN too. If it does, we will have reached an important moment.

7 comments on “Firefox Focus: the not-quite-a-browser for Android aims for privacy”