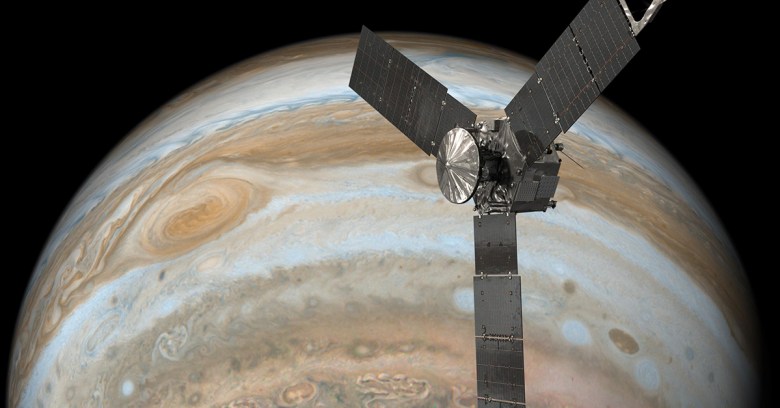 NASA‘s Juno mission completed a fly-by of the giant planet’s iconic red spot on Monday, said the US space agency on Tuesday, gathering spectacular images of the 16,000km-wide storm that has been monitored from Earth since 1830.

The closest the Juno probe (pictured) got to the planet and the storm was 3,500km above Jupiter’s cloud tops on Monday, and shortly after that it logged a year in orbit after having been launched from Cape Canaveral in Florida in August 2011.

“For generations, people from all over the world and all walks of life have marvelled over the Great Red Spot,” said Scott Bolton of NASA. “Now we are finally going to see what this storm looks like up close and personal.”

NASA is posting the amazing raw images the probe gathers on its website and is encouraging people to download them, mix them up and upload them to share with fellow space geeks, saying: “Creativity and curiosity in the scientific spirit and the adventure of space exploration is highly encouraged.”

Footage of politician ‘did not break the law’

Footage of the leader of the UK’s opposition Labour party on a train did not breach data protection rules when the train operator, Virgin Trains East Coast, published the footage in August last year, data protection authorities said on Wednesday.

The CCTV footage, of Labour leader Jeremy Corbyn walking past empty seats on the train, was published by Virgin Trains after he had criticised the company for running packed services and had claimed he couldn’t find a seat and so had to sit on the floor.

However, the train operator had breached the law by not obscuring the faces of other passengers visible in the footage, said Steve Eckersley, the head of enforcement at the Information Commissioner’s Office, the UK’s data protection regulator.

“The ICO found that Virgin should have taken better care to obscure the faces of other people on the train. Publication of their images was unfair and a breach of the first principle of the Data Protection Act,” said Eckersley.

He went on to explain that although Jeremy Corbyn would normally also be protected, “the ICO’s view was that Virgin had a legitimate interest, namely correcting what it deemed to be misleading news reports that were potentially damaging to its reputation and commercial interests”.

Donald Trump, the US president, is being sued by Twitter users he has blocked who claim that he has violated their constitutional rights.

The lawsuit, which was filed in the Southern District of New York, follows a letter sent by the Knight Institute last month which threatened the legal action. In the letter, the institute said that being blocked by the president “supresses speech in a number of ways”.

The letter adds: “Blocking users from your Twitter account violates the First Amendment. When the government makes a space available to the public at large for the purpose of expressive activity, it creates a public forum from which it may not constitutionally exclude individuals on the basis of viewpoint.”

5 comments on “News in brief: probe in Jupiter fly-by; footage of politician ‘not illegal’; Trump sued over Twitter block”