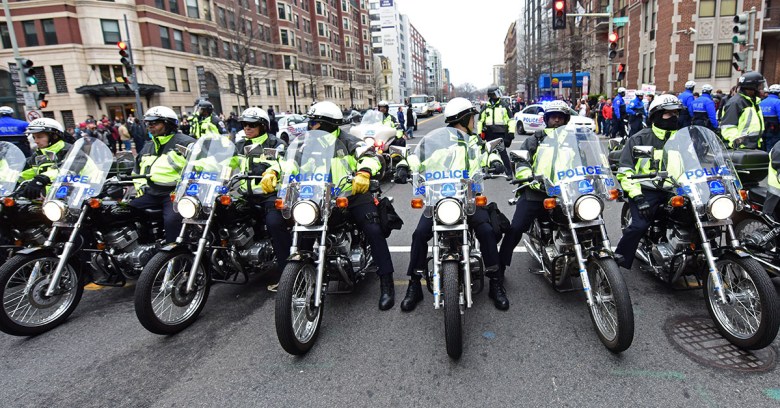 We already know that police scoured the social media accounts of at least some of the 230 protesters arrested on inauguration day in January 2017 (pictured).

They also seized the phones of more than 100 people and began rooting around for data.

In March, prosecutors said in a court filing (PDF) that at that point, the government expected to be in a position “to produce all of the data from the searched Rioter Cell Phones in the next several weeks”.

It would take a while, the government said in the March filing:

All of the Rioter Cell Phones were locked, which requires more time-sensitive efforts to try to obtain the data.

Well, it turns out that most, but not all, of the phones were locked, as in, encrypted. And the police plan to have quite the field day with those few in the inauguration day court cases.

In March, federal prosecutors were stitching together a cloud-based database full of all the personal data they had managed to squeeze out of those 100 phones. Some of the phones belonged to people who had been indicted, while others belonged to un-indicted arrestees.

They sought to make the data available to the lawyers of 214 defendants accused of felony rioting.

Now, thanks to a a July 21 filing seen by The Daily Beast, we know exactly what data investigators managed to get their hands on after cracking the passwords of at least eight locked phones.

Namely, prosecutors say they want to use extracted internet histories, communications, and photos as evidence against the defendants in court.

The July 21 filing moved to enter evidence from eight seized phones, six of which were encrypted and two of which were not. A Department of Justice representative confirmed to the Daily Beast that “encrypted” meant additional privacy settings beyond a lockscreen.

According to the July 21 filing, encryption did what encryption’s supposed to do. The encrypted phones didn’t offer up much of anything: just “a short data report which identifies the phone number associated with the cell phone and limited other information about the phone itself”.

The unencrypted phones, on the other hand, offered up a jackpot. Investigators got everything: the phones’ “call detail records,” “SMS or MMS messages,” “contact logs/email logs,” “chats or other messaging applications,” “website search history and website history,” and “images or videos.” Prosecutors are seeking to use whatever of that data related to January 20 – the date of the protest – or to other people who are suspected of having been involved in the protest.

As CityLab reported in January, police may have been attempting to search arrested people’s devices for content pre-trial, within a day of seizing them. One detainee’s Gmail account sent out a Google alert about being accessed at 4:15 pm the day after its owner had been arrested, while the device was in police possession.

Prosecutors claimed in the March filing that they had accessed a “large amount” of personal information that was irrelevant to the charges the defendants are facing, including photos and videos. In fact, assistant United States attorney Jennifer Kerkhoff told the court in March that the government had collected more than 600 hours of video footage from the confiscated phones.

Mark Goldstone, a lawyer representing six of the accused, said it’s not surprising that some of the footage is irrelevant. It’s pretty mundane, and it’s hard to see how it could be used to prosecute people on charges of rioting. Esquire quoted Goldstone when he was on a late-March conference call with 15 other lawyers representing protestors, when he said that for some of the defendants, the video amounted to…

It sure doesn’t sound like much of a smoking gun. But as Esquire puts it, it’s not hard to demonize a masked protester.

The scary thing about it is that defendants who want to test that theory have to be willing to face a jury, who could uphold the government’s line.

It’s one example of how there are good reasons to keep personal data private – and your phone encrypted. If law enforcement is looking through your device after you’ve been at a protest, making it harder to access makes sense.