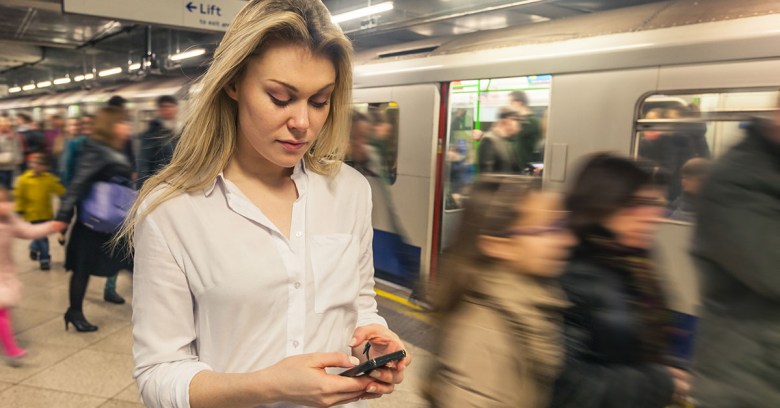 On pretty much any given day, you’d rather spend your morning on the subway reading the newspaper, drinking your coffee, or catching up on Instagram than have photos of a stranger’s genitals up on your iPhone.

Unfortunately, the return of an ancient fad known as bluejacking has meant that the air in subway cars has increasingly been polluted by unwanted intimate pictures.

As you may or may not recall, bluejacking first popped up in 2003. It allowed pranksters to exploit mobile phones’ Bluetooth technology, which lets devices communicate with each other up to a range of about 30 feet. When Bluetooth is activated, it automatically seeks out other Bluetooth devices in the vicinity, and that lets people send anonymous messages – or, say, pictures of their junk, as goes the modern rendition – to each other.

As Sophos technical support reported many moons ago, getting anonymous messages panicked some users into thinking they might be under attack from a mobile phone virus.

That’s exactly what bluejackers were after: that shocked look on a recipient’s face as they blasted out unexpected junk.

Ironically enough, the idea for bluejacking was originally that of a woman, and the first victim was a man, though there are other origin stories about it having been first carried out by a Malaysian IT consultant who used his phone to advertise Sony Ericsson. At any rate, as the BBC tells it, a woman going by the name of Ellie had said that the “priceless” expression on the face of her first victim as he tried to work out what was going on had turned her into a regular bluejacker.

She reportedly put up a tutorial on a message board that, back then, was a favorite among owners of SonyEricsson phones, explaining that …

[The victim’s expression], mixed with not knowing whether the victim will react in an amused/confused or negative way gives me an adrenaline rush.

Fourteen years after adrenaline junkies were getting high on bluejacking, we now have AirDrop: an iPhone file-sharing app that enables users to send photos, videos and documents instantly over a wireless connection.

Nowadays, many people have AirDrop enabled. They’ll turn it on to use it once, then they’ll forget to turn it off. That means there are plenty of phones that are beaming out come-hither signs over the airwaves, and there are plenty of perverts ready to freely spew their pixels on to them.

And that’s exactly what’s happening. The reference to 120 penis portraits wasn’t an exaggeration: Sophie Gallagher, a writer for Huffington Post UK, on Tuesday posted a story about having been cyber-flashed with a flock of more than 100 down-the-pants images via AirDrop while traveling on the London Underground.

That’s 120 images, to be exact, she later reported in a post that took people to task for blaming the victim.

“Stop telling me to turn my AirDrop off,” she said, in spite of the fact that, well, shutting your Wi-Fi up would in fact stop the weiner parade:

Yes, turning it off stops me from receiving the pictures, it makes it harder for the perverts to contact you when you have the nerve to leave the house in the morning.

But it doesn’t stop the offender from sending them to someone else, from believing that they can hide behind their phone screen and cause harm and distress to unsuspecting people around them.

And quite honestly it is insulting to men to suggest that the only way they can resist making sex offenders of themselves is to block their methods of communication.

Insulting? Well, it might be more like “pragmatic”. Dr Justin Lehmiller, a Harvard University psychology professor, has suggested (in the absence of much research on the topic) that the (extremely) common phenomenon of sending unwanted penis pictures to women could be attributed to cognitive biases that have evolved to help with reproduction.

I suspect that the most likely explanation is that men are simply misperceiving women’s interest in receiving photos of their junk. There’s a large body of research indicating that men aren’t very good at determining how interested women are in sex.

In fact, research has shown that men often mistake friendliness for flirting. Basically, women have to club them with eggplants – did you know that the eggplant emoji is a stand-in for “penis?” – to get across the idea that they don’t want to get a closeup of their zucchinis.

How should one react when one receives images of a stranger’s floppy flesh? It’s advisable to report the matter to police. As the HuffPo has reported, few women do so, and London police, at least, seem to think that there’s no epidemic going on. (New York police seem to know better.)

It’s well worth reporting incidents to the police, both to get them up to speed with the frequency of unsolicited photos and to get the senders caught.

Because yes, it’s a crime. In England, sending indecent images is classified under section 66 of the Sexual Offences Act (2003), given that it’s the same as exposing genitals and intending that the recipient “see them and be caused alarm or distress”. The penalty for breaking the law is a prison term of up to two years.

My message to offenders is clear, while you might think you can hide behind modern technology in order to carry out abuse, you leave a digital footprint and stand a very good chance of being caught, arrested and ending up on the sex offenders’ register.

And that might be a lot of offenders finding their way on to the register: a survey of more than 5,500 American singles found last year that 53% of the women they asked had been on the unwilling receiving end of an unsolicited picture. People, just don’t send photos of your junk to someone else unless you know it will be welcome – and by “know it will be welcome”, we mean “that you’ve got explicit consent to send”.