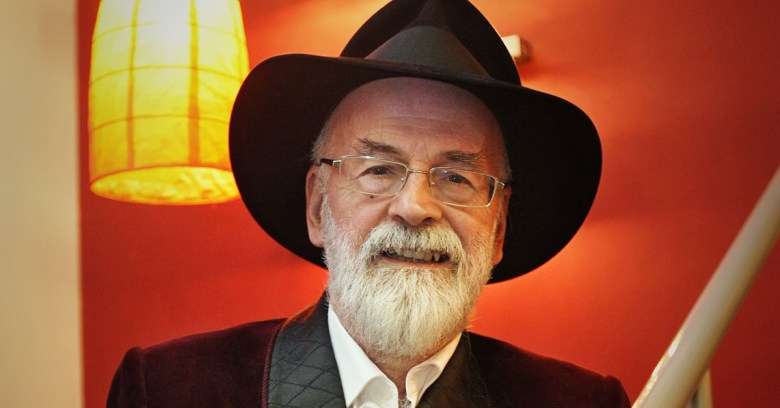 Destroying data securely is something we at Naked Security care about, so as sad as we were to learn that there won’t be any posthumous books from the fantasy author Terry Pratchett, who died two years ago, we couldn’t help but approve of the steps taken by his business manager, Rob Wilkins, to carry out Pratchett’s wish.

Rather than using a software solution, a hard drive containing Pratchett’s unfinished works was crushed by a steamroller at a fair in Dorset, in southern England, last week, fulfilling Pratchett’s instructions. Fellow fantasy author Neil Gaiman told The Times after Pratchett’s death that he had wanted “whatever he was working on at the time of his death to be taken out, along with his computers, to be put in the middle of a road and for a steamroller to steamroll over them all”.

Wilkins posted before and after pictures on Twitter of the hard drive – which you can see if you’re going to be in southern England between next week and the middle of January, as it will be part of an exhibition, Terry Pratchett HisWorld, at the Salisbury Museum.

WikiLeaks, which has always promised would-be whistleblowers that it offers a secure way to leak confidential information, suffered something of an embarrassment last week when its website was defaced by a group calling itself OurMine.

However, it seems unlikely that WikiLeaks itself was breached: the unexpected page seems to have been the result of DNS hijacking, where the attackers managed to redirect DNS queries, sending browsers to the replacement home page rather than the real WikiLeaks’ page.

The OurMine group that claimed responsibility isn’t new: it’s thought to be behind the leaking of Game of Thrones episodes, as well as attacks on BuzzFeed, Wikipedia founder Jimmy Wales and Facebook boss Mark Zuckerberg.

The page that greeted visitors to WikiLeaks said: “don’t worry we are just testing your … blabblablab, Oh wait, this is not a security test!” WikiLeaks regained control of the page quickly, while WikiLeaks Task Force, which says it’s the official support account for WikiLeaks, said on Twitter that it was “fake news”.

We reported last week about a glitch in Instagram’s API that apparently exposed the details of high-profile users. Instagram fixed the glitch, and all seemed to be well.

Not so, according to The Daily Beast, which reported over the weekend that hackers had posted a searchable database of the details of some of the social media platform’s highest-profile users.

The hackers said that anyone can search the database for contact details – for $10 a search.

The people claiming to be behind the database, called “Doxagram”, gave The Daily Beast a sample of the data including details of what they said were 1,000 Instagram accounts, saying: “Instagram clearly hasn’t yet understood the full impact of this bug.”

If you’ve got an Instagram account, whether you’re a celebrity or not, now would be a good time to review the security of your account: make sure you’ve got 2FA enabled on it, and have a look at our five tips to secure your account.