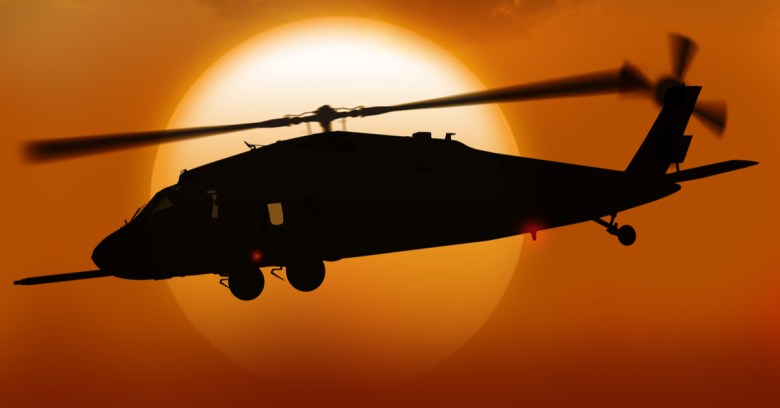 New York City drone operators want to know: where can they legally fly their drones?

Short answer: in your dreams. You can only fly in a few designated parks in Brooklyn, Queens and Staten Island.

Regardless of those and other restrictions, a civilian drone crashed into a US Army helicopter last Thursday, striking the left side of the fuselage, damaging one of the copter’s blades, denting the rotor blade in two spots, denting the window, and spitting out a chunk of itself that landed at the bottom of the main rotor system.

The helicopter landed safely at a nearby airport. The pilot was unharmed. The rotor blade will have to be replaced, and the hunt is on to find the pilot who’s responsible for the extremely dangerous collision. The New York Police Department, the Federal Aviation Administration (FAA), the US Secret Service, the FBI and the military are investigating, but no arrests had been made as of Monday evening.

The helicopter was one of two Army UH-60M Black Hawks with the 82nd Airborne out of Fort Bragg, North Carolina. They were in the city to provide security for the annual United Nations General Assembly, which drew world leaders including US President Donald Trump.

The helicopters were flying low along the east shore of Staten Island, 500 feet over Midland Beach, when one of them was struck around 7:30 pm, according to the aviation-focused publication AIN Online.

We traditionally fly [in] restricted airspace or in combat, so this is a new experience. We were obviously flying over a residential area – a municipal area – supporting this mission. We are reviewing the process now should we receive another mission like this.

Besides the fact that the drone was flying over a residential area, and not over a designated flying park, it was also flying in violation of a Temporary Flight Restriction covering Staten Island at the time of the collision.

The Army reports that the drone was also flying above 400 feet, which is the maximum height that recreational drones are allowed to fly. The drone involved in Thursday’s collision wasn’t within five miles of either nearby Newark Liberty International or Linden, New Jersey airports, the Army reports.

This is only the most recent misbehaving drone story. Drone operators have flown close to UAV-sucking jet engines on passenger planes, police helicopters, and firefighting aircraft. They’ve flown UAVs on to the White House lawn and above playgrounds, concussed at least one person at a parade, and aggravated a homeowner to the extent of “Hey, gadget! Have a taste of birdshot!!!”

Yes, that man did get arrested for shooting down a drone over his property, but a judge later said he had a right to do it. That judge obviously wasn’t presiding over a court in Massachusetts: on Friday, a judge overturned a local law in the town of Newton, Massachusetts, that banned drones flying over private property at or below 400 feet.

Given all the collisions and near-misses, it’s a miracle we don’t see more drone-inflicted injuries.

The Staten Island Black Hawk incident could have been tragic – the helicopter held four crew members. It’s thanks to the skill of them all, including the pilot who reacted and who landed the helicopter safely, that they’re all safe.