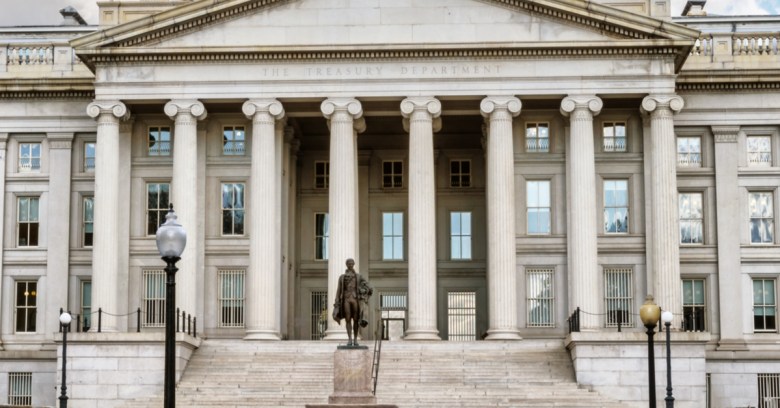 How many of us even knew the US Treasury Department has a foreign intelligence division?

We certainly know about the Office of Intelligence and Analysis (OIA) now. A recent BuzzFeed report accuses the OIA of deciding years ago that foreign intelligence wasn’t enough, and going domestic – shades of the National Security Agency (NSA).

Citing more than a dozen anonymous government sources from another branch of Treasury, BuzzFeed reported last Friday that the OIA…

…has repeatedly and systematically violated domestic surveillance laws by snooping on the private financial records of US citizens and companies.

The story quoted an unnamed “senior Treasury official” saying, “This is domestic spying.”

That line between the roles of law enforcement (domestic) and intelligence (foreign) agencies dates from President Ronald Reagan’s executive order (EO) 12333. While there are instances when intelligence agencies can conduct surveillance on US citizens, they are limited by strict, court-ordered guidelines.

But according to those anonymous sources, OIA has been illegally collecting the banking and financial records of US citizens as well – records that banks and financial institutions are required to turn over to the government every day, under the provisions of the Bank Secrecy Act of 1970.

Not according to Treasury, which called the story “flat-out wrong,” in an official denial several hours after the story was posted. It said in part:

An unsourced suggestion that an office within Treasury is engaged in illegal spying on Americans is unfounded and completely off-base.

The unauthorized collection of domestic financial records had allegedly been going on for years until the Financial Crimes Enforcement Network (FinCEN) – the division of Treasury that legally collects those domestic records – found out about it and complained.

Apparently irritated by the complaints, in early 2016, Treasury’s Office of Terrorism and Financial Intelligence (TFI), which oversees the OIA, proposed transferring much of FinCEN’s responsibilities (and a corresponding percentage of its employees and budget) to the OIA.

FinCEN’s leadership, perhaps predictably, objected on multiple grounds. They said the move would be illegal without congressional approval. They said OIA could not legally collect domestic financial records unless it complied with Executive Order 12333, which was renewed in 2008 by President George W. Bush.

That order would require the OIA, before it collected domestic records, to establish privacy guidelines approved by the attorney general, in consultation with the director of national intelligence – something the OIA still hasn’t done.

It was after that conflict that the leaks began, both to BuzzFeed and to Congress. According to anonymous sources, not only was the OIA illegally collecting financial information on US citizens, it was also allowing a “back door” to the staff of other intelligence agencies, including the NSA, CIA and DIA, to come into its offices to search domestic financial records that they could not get through their own agencies.

DIA didn’t comment, but both the NSA and CIA issued denials. The CIA’s Dean Boyd said:

Suggestions that the Agency may be improperly collecting and retaining U.S. persons’ data through the mechanisms you describe are completely inaccurate.

Some members of Congress have been aware of FinCEN’s complaints for at least a year. Rep. Sean Duffy (R-WI), chairman of the House Subcommittee on Oversight and Investigations, wrote in October 2016 to then Treasury secretary Jacob Lew asking whether OIA had legal authority to collect and retain information on US citizens. He never got an answer.

But since the story was posted, and in spite of the denials, Treasury’s Office of the Inspector General said it will review the matter.

Congress may review it as well. Gizmodo reported that Sen. Mark Warner (D-VA), the ranking Democrat on the Senate Intelligence Committee, and Sen. Ron Wyden (D-OR) were calling for Treasury officials to appear before the committee. Keith Chu, a spokesman for Wyden, said if the allegations are true, they, “would represent a serious abuse of spying power…”

But so far, the OIA maintains that everything it is doing is “within the bounds of statute.” The remainder of the statement issued after the story ran said:

In the post-9-11 era, law enforcement and Intelligence Community members, both within agencies and across the federal government, are required to share information as governed by law. Treasury’s OIA and FinCEN share important information and operate within the bounds of statute and other relevant legal authorities.

The dedicated staff throughout TFI share a common mission to utilize and share financial data to prevent terrorist attacks, money laundering, narcotics trafficking and other illicit activity, and do so by following all applicable laws and regulations. We have a responsibility to bring to bear all the tools available to us to protect the American people.