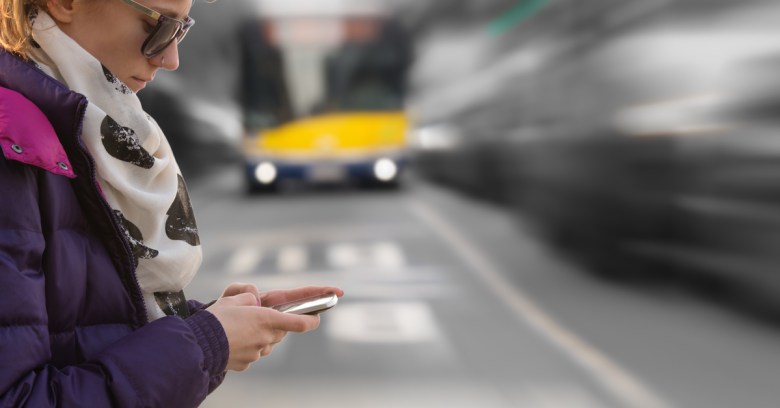 Honolulu is legislating survival of the fittest by fining the oblivious up to $99 for texting while crossing the street.

That’s right: the Hawaiian city wants gadget-distracted pedestrians to actually look up from their phones instead of being turned into past-tense pancakes.

The bill (PDF), which went into effect on Wednesday, states that “no pedestrian shall cross a street or highway while viewing a mobile electronic device.”

That includes all you gamers, anybody who’s rigged up their laptop so they can stare at it and walk (how do you even do that? Does it involve a harness? Where does your coffee go?), any text messaging device, pagers, personal digital assistants or digital cameras. Audio equipment is OK. And yes, you can keep yammering on the phone. You just can’t look down at it while simultaneously walking in front of a screaming wall of metal.

If you do, the first fine will cost you up to $35 (£26.41), up to $75 for your second, and $99 if you still haven’t reformed your eyeballs before police catch you a third time. Emergency responders are off the hook with this one: they can look at devices while in the line of duty.

What business do we have writing about this at a cybersecurity blog? Oh, this is computer security, all right. It’s just a moister variety of computer security: less ones and zeros, more what Naked Security’s Mark Stockley described as “I pondered upon the unfathomable nature of my iPhone’s encrypted bits as it split asunder, squeezed between the blunt end of a Humvee and my suddenly much wider and shallower rib cage.”

Honolulu wasn’t the first to give this a go. And its fines are nothing. Another bill was introduced last year in Hawaii that would fine someone $250 for crossing the street while using an electronic device. New Jersey tried to ban distracted walking last year, and it was ready to not only fine the guilty but to throw them in jail for 15 days.

The tiny Idaho city of Rexburg has banned texting or using a cell phone while crossing a street and will fine offenders $50 for the first offense and $150 for each subsequent offense. Boston Globe has others on its list: Fort Lee, New Jersey; and the Utah Transit Authority (you can’t distracted-walk across the train tracks).

The look-up-for-cripe’s-sake movement is snowballing for a good reason: it’s funny in a cartoony way until it’s very not funny at all.

A report from the National Safety Council found that distracted walking incidents involving mobile phones accounted for an estimated 11,101 injuries from 2000 through 2011.

Most people were talking on the phone when they were injured. Twelve percent were texting. Nearly 80% of these pedestrians hurt themselves by falling, and 9% by walking into something.

Short of outlawing the palm-warmers of the phone-addicted, some places have tried to get creative: Antwerp in Belgium, Utah Valley University, and the Chinese city of Chongqing have all painted lanes on sidewalks for the Walking Dead.

Why can’t we stop? What do we get out of that screen? A hit of dopamine?

There’s got to be a better way to get our jollies: a less crunchy way, preferably, with no fines attached. I’d say “the warm smile of a child” or “birds singing on the phone wires overhead,” but I don’t want you to look up instead of where you’re going. That gets us back to cartoony.

3 comments on “Honolulu gets tough on people texting while crossing”