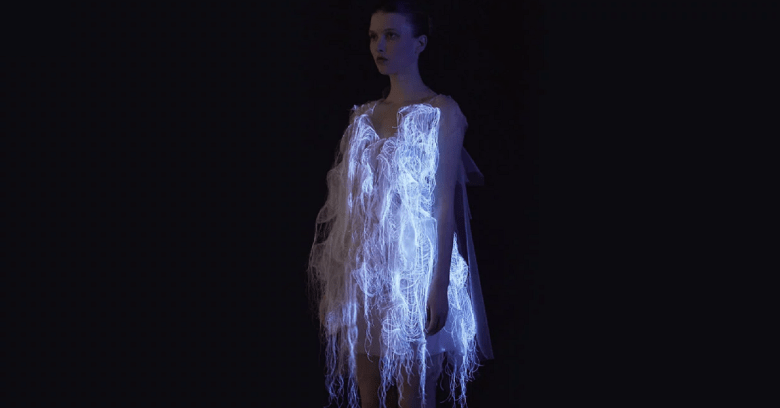 A dress with an electronic display you can control via your smartphone? Trippy.

Smart textiles are getting SMART. This one, aptly named living pod, changes structure through miniature electric motors activated by light sensors that are sewn throughout the garment. It will be giving me nightmares.

No, they cannot. Nor can you iron them or throw them in the wash, what with their electronics and power sources.

But that has now changed, thanks to researchers at the University of Washington. Last week, they announced that they’ve manipulated the polarity of magnetized fabric – they used off-the-shelf conductive thread – to create fabrics and fashion accessories that can store digital data or visual information.

As the researchers note, conductive thread is already used to create stuffed animals, clothing or accessories that light up or communicate.

But the UW researchers realized that the thread’s ferromagnetic properties could also be used to store data, or visual information such as letters or numbers, that can be read by a magnetometer: an inexpensive instrument that measures the direction and strength of magnetic fields and is embedded in most smartphones.

Think passcodes to an electronic door lock that can be stored on a patch of conductive fabric sewn to a shirt cuff. That’s one of several projects the researchers undertook, managing to unlock a door by waving the cuff in front of an array of magnetometers like you would a hotel key card.

Using the conductive thread means that such password embedding can be done without on-board electronics or sensors. Shyam Gollakota, an associate professor at UW’s Paul G. Allen School of Computer Science and Engineering:

We are using something that already exists on a smartphone and uses almost no power, so the cost of reading this type of data is negligible.

The researchers used everyday sewing machines to embroider fabric with the thread, creating patches that could be turned into a neck tie, a belt, a wristband, a necklace, or a strip that can be sewn onto garments.

Then, they rubbed magnets against the fabric to create a pattern of positive and negative polarity that corresponds to the ones and zeros of digital data. There are ways to reverse the polarity of a magnet, but their fabric’s magnetic signal persisted even after machine-washing, drying and ironing at temperatures of up to 320 degrees Fahrenheit.

Just as happens with hotel room keys, the strength of the signal degraded over the course of days – over the course of a week, it weakened by 30% – but the fabric is an easily reprogrammable and remagnetizable data storage medium.

This is a completely electronic-free design, which means you can iron the smart fabric or put it in the washer and dryer. You can think of the fabric as a hard disk – you’re actually doing this data storage on the clothes you’re wearing.

They also created gloves with the threads embedded into the fingertips, showing that they could use the gloves to swipe, inputting data into a smartphone without taking it out of a pocket. They managed to program six commonly used interactive phone swipe gestures with 90% accuracy.

Next, the team plans to work on developing custom textiles that generate stronger magnetic fields and are capable of storing a higher density of data.

3 comments on “How to wear your password on your sleeve, literally”