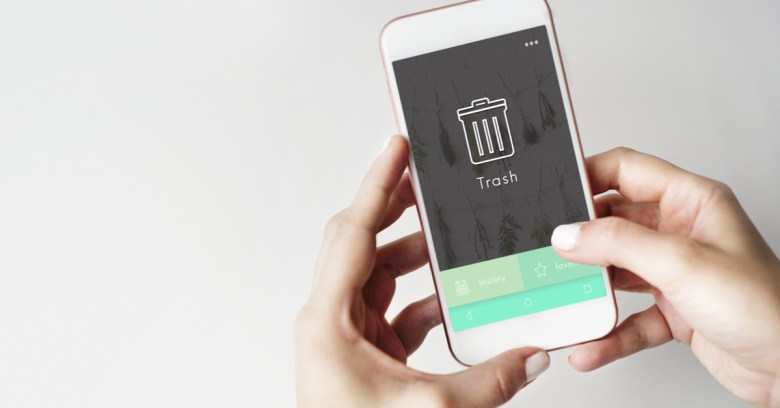 Have you ever sent a WhatsApp message to the wrong chat? Like, say, one about your jerky boss that was meant for your work buddy but somehow got sent to your jerky boss?

If so, you were probably pleased when WhatsApp recently introduced the ability to unsend messages. The “Delete for Everyone” feature was designed to let you virtually reach out and rub a message out of existence on recipients’ devices. Instead of seeing the post, they’d see a message that says: “This message was deleted,” but they couldn’t see the content. It works not only for text but also for attachments such as photos, videos, GIFs, and voice messages.

It’s kind of like the ephemeral nature of Snapchats, right? You can get a little risque, since you have a window of time (supposedly 7 minutes) to delete a WhatsApp post, just like that supposedly vanishing Snap of whatever fleshy hijinx you’ve been up to, right?

Well, unfortunately, it turns out that WhatsApp and Snapchat share another commonality: just as Snaps that were supposed to have “disappeared forever” turned out to stay right there on your phone, WhatsApp messages that are deleted are actually still on the device and can be easily accessed.

This is according to a report from the Spanish Android blog Android Jefe, which found that deleted WhatsApp messages – at least, the first 100 characters – can be read off of the notification log of the device.

What we found is that the messages are stored in the notification register of the Android system. So, it’s just a matter of entering that record to see the messages that the other person deleted.

Notification History is a hidden feature that first got added in Android 4.3. Hidden it may be, but there are apps on Google Play that will happily reveal it for you.

Then again, you might not need any special apps at all:

If the “Settings” widget is added to the home screen, you will probably find the “Notification registration” option, as we saw in this article with a Motorola Moto G.

“It works perfectly,” Android Jefe says, despite limitations. Those limitations include that the notification log usually only saves notifications for a few hours. Also, the log is deleted when the phone is restarted. Another limitation is that you can only retrieve messages that have already been seen or interacted with. According to Android Jefe, only when the system detects these events does it save a message in the registry.

To get at your phone’s not-deleted deleted messages, you need a phone running at least Android 6 or 7. In Notification History, look for the notification that says WhatsApp. The message will be in the line that says “android.text”.

Regardless of whether you retrieve deleted messages via notification history or a backup app, you need to make sure WhatsApp notifications aren’t disabled.

Should you do any of this? Should you go read messages that somebody obviously doesn’t want you to read? Isn’t that a bit rude?

Sure! Sure, it’s a bit rude, at the very least, to ignore somebody’s desire to whisk their communications off your phone.

But what really matters is that it can be done. It’s a reminder that once a message or a photo is off your phone, you don’t control it, no matter what comfort blankets your app might provide. Your “Delete for Everyone” button can’t save you from screenshots, backups or logs, or from giant picture-sucking websites like SnapSaved.com, the online repository of supposedly deleted Snapchats that was cracked open by hackers in 2014.

So keep this in mind when you compose a WhatsApp message that you might want to stamp out of existence at some point: it’s a lot easier not to write it in the first place than it is to ensure that it’s really, truly deleted – just like those oh-so-not-disappearing Snaps!