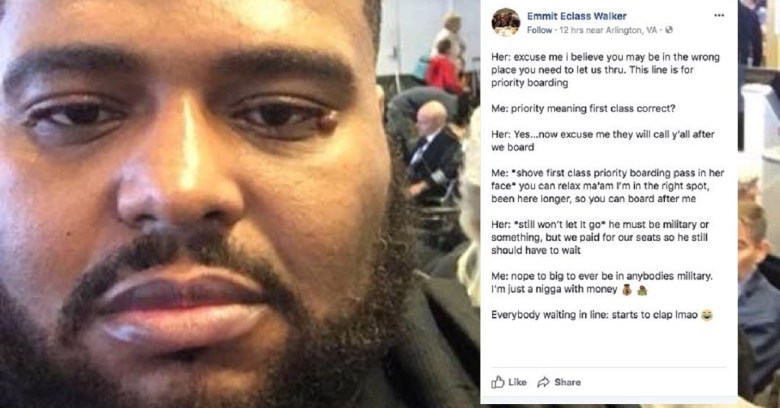 Did you hear the one about the African American guy standing in a priority boarding line at the airport who got told to get out of the way by a white lady who assumed he a) either got in the wrong line, and hence was standing in the way of rich people who deserve to be there, or b) must be there because he’s military and should still get out of the way because, again, he was in the way of people who actually paid to be there..?

No? Sorry, this one doesn’t have a punchline. It’s just another story of a viral post that turned the internet into a torch-bearing mob.

The guy’s name was Emmit Eclass Walker. He’s a music industry executive. I don’t know what the white woman’s name was, but I do know that she became the recipient of a dump-truck load of internet scorn, derision and hate speech after Walker posted a photo of her onto Facebook.

From that post, which showed him in front of a white woman who was pointed out with a drawn-in red arrow:

Her: excuse me i believe you may be in the wrong place you need to let us thru. This line is for priority boarding

Her: Yes…now excuse me they will call y’all after we board

Me: *shove first class priority boarding pass in her face* you can relax ma’am I’m in the right spot, been here longer, so you can board after me

Her: *still won’t let It go* he must be military or something, but we paid for our seats so he still should have to wait

Me: nope to big to ever be in anybodies military. I’m just a ni**a with money 💰

Everybody waiting in line: starts to clap lmao 😂

Walker must have felt great, right? As of Monday afternoon, his post had been shared 265,959 times. It had 160 comments, in which the woman was insulted every which way from here to Sunday.

“Ignoramus.” “[Dyed] and fried blonde hair.” “Hahahahahahahahahahaha Got eemmmmmm.” “you white WITCH!!!” “White privilege is something else!!!!! Smh! I’m glad you stood your ground!”

And from there, the “conversation” continued to spiral.

Another Facebook user claimed that Facebook removed their comment on “the stupid ignorant Caucasian.” (They would; such is considered hate speech and is thus against Facebook’s Community Standards).

It turned and turned in the widening gyre, to paraphrase Yeats, until the falcon could no longer hear the falconer. Things fell apart. The center couldn’t hold. A woman’s misperception – call it informed by white privilege, call it rudeness, call it a faux pas – had exploded into rage and vindictiveness.

It didn’t feel great. Maybe Walker felt vindicated at first, but not after the post went viral and spiraled out of control.

It had gotten so far out of hand that on Friday, Walker posted an apology on Instagram, even though he was the one who’d initially been wronged.

When i posted that post on Facebook i didn’t expect all that to come from it. I can honestly name the four or five people i thought would comment with something funny, and that will be it. This racist stuff is definitely a issue but this is not the solution to that issue. It brings me no joy waking up in paradise to for my 37 bday and knowing that woman might be going threw hell. The story was definitely real, just like this issue is definitely real, but i now know that I myself should of handled it another way, or left it how it was, and not shared It publicly. When dealing with people i always try to stay on the side of Right, so to make sure I never do anybody wrong, I try to always put myself in that persons shoes, and ask how would I feel if that person did this to me, and if I was her this morning i would be a total wreak today, and that doesn’t help this situation, or her…it only makes them more angry, and bring more drama…SO I WOULD LIKE TO APOLOGIZE AGAIN TO THE WOMAN I HAD THIS ENCOUNTER WITH YESTERDAY. NO MATTER HOW WRONG YOUR ACTIONS YOU DON’T DESERVE THIS … I BELIEVE IF YOU CAN’T HELP NOBODY AT THE VERY LEAST YOU SHOULD NEVER DO ANYTHING TO HURT THEM

As you can clearly see by reading the comments to his Instagram post, Mr. Walker is a bigger hero for this apology, and the humility and compassion it demonstrates, than he was for his initial “put-her-in-her-place!” post.

Of course what this woman did was wrong. But we also need to be aware of the power that can be unleashed when we publicly ridicule people on social media. It’s a violent power that never seems to leave anything in its wake except damage.

Thank you, Mr. Walker, for showing us that we can all rethink, and walk back, our more vindictive first impulses.