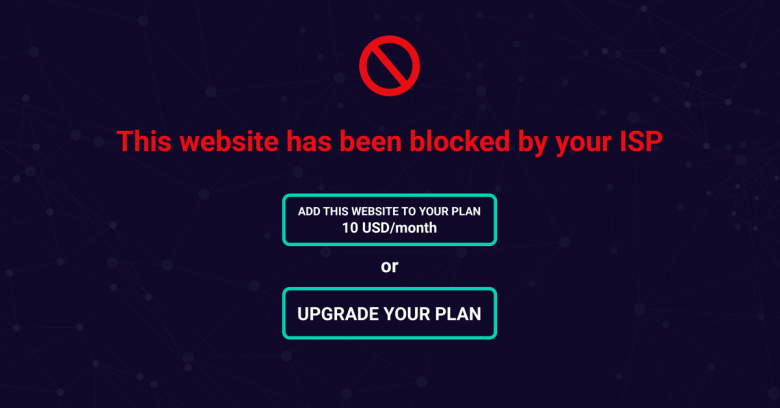 What are you doing calmly reading Naked Security? Your time would be far better spent freaking out about the end of net neutrality.

Or, in the words of one of many messages put forward by Fight for the Future’s Break the Internet campaign:

This tweet is being ██████ by your internet provider. Well, not yet. But, that’s what will happen if we ████ #StopTheFCC. Congress can stop this. Take action now: https://t.co/fo0XsWAAne

Besides urging users to post on social media – the campaign has posted messages (such as that one above) that individuals can easily click to send out on social media – websites are also participating to “stop the FCC,” including Twitter, Facebook, Snapchat, Instagram, LinkedIn, reddit, Tumblr and YouTube. The sites are coming up with creative ways to get their audiences to contact Congress before net neutrality’s neck gets laid on lawmakers’ chopping blocks come Thursday.

“Creative,” as in… well, words fail me. SB Nation is a prime example. It’s usually a site dedicated to sports news, video, commentary and community. As of this Tuesday, it was dedicated to insanity.

It’s in keeping with this week’s “Break the Internet” protests, which are similar to the “Internet Slowdown Day” of 2014, when the spinning wheel of page-will-never-ever-ever-load death took over much of the internet, as companies reminded people what an internet without net neutrality would look like and thereby drove public comment to lawmakers.

Another such was the “Internet Blackout Day” of 2012, which involved protests against the Stop Online Piracy Act (SOPA) and the PROTECT IP Act (PIPA). The activist group Fight for the Future was behind the organizing of all these protests, and the idea has been consistent: to show what the web looks like without net neutrality, be it by changing their logos, slowing down page loading, or by showing fake popups to scare users by asking for extra money to access the website.

The protests have worked in the past. But does the Federal Communications Commission (FCC) even care, at this late date? The proposed rollback of net neutrality regulations seems to be inevitable, in spite of more than six months of reports of fake and bot-generated comments flooding the FCC’s public comments space and, most recently, a demand from New York Attorney General Eric Schneiderman on Monday that the 14 December vote be postponed.

The FCC has finally agreed to help investigate what appear to be at least 1 million fake comments, but only after refusing nine previous requests for FCC logs to show the origin of the comments.

Retweet if you agree, ❤️ if you’re doing everything you can to save #NetNeutrality and #StopTheFCC: https://t.co/6KAscnJ6mm pic.twitter.com/doRIDVTCwF

That’s where you come in. Fight for the Future has a website that helps you join in the protest, offers tips, and asks you to write to your representatives. The effort will run until tomorrow, 14 December.

Fight for the Future organizers have a ton of suggestions on making your voice heard, including changing your Facebook status to married and listing your partner as “net neutrality.” You can also add a “new job” position to your LinkedIn profile called “Defending Net Neutrality at BattleForTheNet.com” – this will trigger a notification to your network and potentially persuade more people to take action before the vote.

Want to make some noise?

Check out the protest’s page for all the noise you could wish for, and then let your flying net neutrality monkeys FLY!

13 comments on “Break the Internet: a last ditch attempt to save net neutrality”