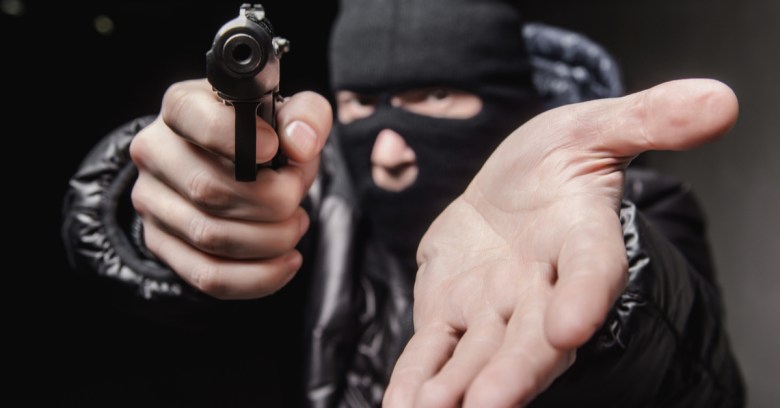 As through this life you travel, you meet some funny men
Some rob you with a six-gun, some with a fountain pen.

You may have thought that was hopelessly out of date, at least when it comes to cyber crime, since robberies that don’t involve physical cash are often done not with a gun or a pen, but with computer keystrokes from miles – even tens of thousands of miles – away.

Especially when it comes to that ephemeral money called cryptocurrency, where, as Naked Security has reported, the most common ways to lose it are through the volatility of its value, exchanges getting hacked or digital wallets being frozen.

But, according to an indictment handed down in New York Supreme Court this week, it can still happen with a gun. Which should serve as a warning to all those who have been enjoying seeing their cryptocurrency investments explode in value: be careful who you confide in.

Manhattan District Attorney Cyrus Vance announced last Tuesday that Louis Meza, 35, of Passaic, NJ, had been arraigned on eight charges, including grand larceny, kidnapping, robbery, criminal use of a firearm, computer trespass and computer tampering for allegedly robbing a so-far unnamed acquaintance on 4 November of about $1.8m of the cryptocurrency Ether.

According to a press release from the DA’s office, Meza had an accomplice who is still at large, but who will likely face similar charges.

The DA said Meza knew the victim had that much Ether in a digital wallet when they met at Meza’s apartment. After the meeting, Meza “insisted” on ordering a car service to take the victim back to his apartment – a “car service” with a gunman.

On the way to the victim’s apartment, an unapprehended individual who had been hiding in the vehicle appeared suddenly and demanded that the victim turn over his cell phone, wallet, and keys while holding the victim at gunpoint.

Prosecutors said the victim was also ordered to divulge a 24-word passphrase. Thankfully the victim managed to escape the minivan where he was being held, at which point he promptly called 911.

Meanwhile, when Meza allegedly entered the victim’s apartment, his presence was documented on surveillance video. And law enforcement found the $1.8m had been transferred to Meza’s personal account the following day.

The DA didn’t specify exactly what was in the box, but it was presumably some kind of paper record or electronic storage.

While a hard drive or USB, if encrypted, can provide protection against thieves getting access to your currency, it doesn’t stop them threatening or coercing you into doing it for them.

In this case, at least one of the perps didn’t get far and the victim will, presumably, get his money back. But Vance warned that as long as cryptocurrency values continue on their seemingly endless spike, this kind of thing will become more common. “This case demonstrates the increasingly common intersection between cyber and violent crime,” he said.

The defendant is charged with coordinating an elaborate kidnapping, armed robbery, and burglary to gain access to the victim’s digital wallet and the significant funds it contained. We can expect this type of crime to become increasingly common as cryptocurrency values surge upward.

2 comments on “Cryptocoins robbed at gunpoint”