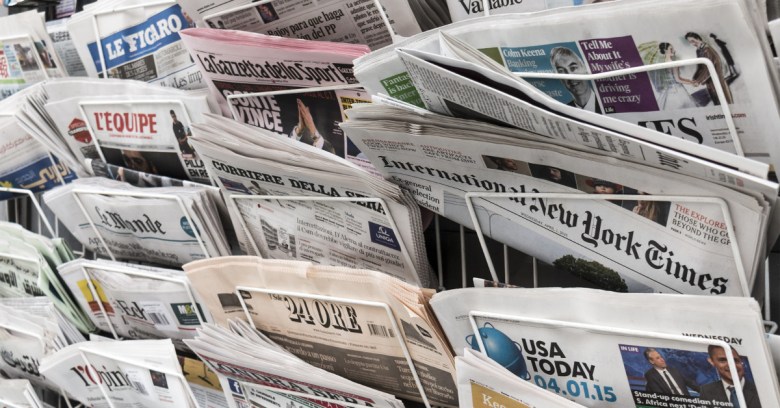 Today’s generation has little to no concept of paying for the news they consume, EU press agencies say.

They go online, and they head to Facebook, Twitter or the like to consume news sourced by reporters putting their lives on the line in dangerous locations such as Syria, Zimbabwe, Cameroon or Myanmar.

We get that news without paying a dime to pay for journalists’ livelihoods or for the news bureaus that support them, the photographers or video reporters who also put their lives on the line to send us visual testimony, or for the editing teams who stitch the stories together and check them for accuracy or bias.

Google, Facebook and other internet giants are making billions, while news agencies are withering on the vine: that’s the message from a group of nine European press agencies that on Thursday called for internet giants to be forced to pay copyright for using news content on which they make vast profits.

In a plea published in the French daily Le Monde as well as in the New European, the press agencies point out that the profits being raked in by internet giants, social networks, search engines and content aggregators are massive.

As it is, Facebook tripled its profits in 2016 to $10 billion, the agencies pointed out. A major driver behind Facebook’s traffic is news articles: it’s second only to users coming to Facebook for friends and family. For its part, Google posted profits of $20 billion on sales of $90 billion: growth that represents a 20% increase in one year. Again, news is a big driver of that growth, the agencies say.

But while news is causing profits to surge at the online giants, none of those giants are lifting a finger to actually produce any news themselves, said the groups, which included representatives of France’s AFP, Germany’s DPA, the UK’s Press Association, Spain’s EFE, Italy’s Ansa, Sweden’s TT, the EANA (European Alliance of news agencies), Austria’s APA, Netherlands’ ANP, and Belgium’s Belga.

From the article they co-wrote:

Neither Facebook nor Google has a newsroom. They have no reporting or production networks, national or international. They have no teams of reporters in Syria risking their lives to show the true face of war. No permanent bureau in Zimbabwe to tell the story of Mugabe’s departure. No journalists in Cameroon. Nor Myanmar. No video reporters. No photographers. No editing teams to plan, edit, check and double-check the accuracy and impartiality of the stories sent in by reporters on the ground.

The press agencies’ call for a bigger share of online revenues comes as the EU is debating a directive to make Facebook, Google, Twitter and other major online players pay for the millions of news articles they use or link to.

Commenters have been quick to point out that without the dissemination of links to news reports provided by search engines and platforms such as Twitter and Facebook, news outlets would be starved of readers. Do they really not want Google et al. to link to them?

Of course they do. But they’d also like to see some form of recompense besides the “crumbs” they’ve been tossed in the past. From their cry for help:

The few attempts led by the media industry in Spain, Germany and France in 2013 and 2014 to get internet giants to pay anything more than a few symbolic crumbs all failed to fundamentally change the situation.

At any rate, although the internet giants “undeniably play a crucial democratic role by spreading news worldwide,” the agencies say, reporting news just isn’t their bailiwick. Facebook CEO Mark Zuckerberg, for one, completely agreed with that back when fingers first started pointing over the issue of fake news. Zuckerberg insisted that Facebook is “a tech company, not a media company.”

We build the tools. We do not produce any content.

Facebook doesn’t make news, but it does “offer internet users the work done by others, the news media, by freely publishing hypertext links to their stories,” the EU press agencies said. And that’s making Facebook and other online companies rich from ad impressions:

Their profits from the news business are booming while those of the media are collapsing.

The press groups note that within just a few years, Google and Facebook have captured an estimated 60-70% of online advertising, depending on the region. At the same time, online advertising revenues have collapsed for media: “A disaster for the news industry.”

The danger is to the heart of democracy itself, they say:

Years have passed and today the very business of credible, free reporting is threatened. Quite simply because soon the news media will be unable to finance it. The diversity and quality of news, a pillar of any democracy, may be at risk.

So who should pay to keep the news industry alive? Not the taxpayers, the agencies said. Rather, it’s time for the internet giants to kick back a fair contribution. The EU is considering a solution called neighbouring rights – the right to reproduce news content and to make it available to the public. It would benefit news publishers and news agencies, but it wouldn’t require tax payers to pay up.

As it now stands under the current EU copyright regime, copyright and neighbouring rights are only available to authors, not to press publishers. But in September 2016, the European Commission announced an agenda for a Digital Single Market – a “strategy to ensure access to online activities for individuals and businesses under conditions of fair competition, consumer and data protection, removing geo-blocking and copyright issues” – across the EU.

Part of that would be a key provision that would require member states to provide press publishers with rights to control the reproduction and the power to make content available to the public – rights now only available to authors. The new right, which would last 20 years, would apply to publishing snippets online: those simple news previews that might seem like no big deal to anybody except the press publishers that created the material to begin with.

Some European Parliament members are worried about all this: worried that the proposed directive would threaten free access to news for internet users.

But that’s not what will happen, the agencies insisted.

We should be clear about who is being targeted. People browsing the internet will not be affected. They will pay no more than they do today. Rather, those who have benefitted disproportionately from advertising revenues should repatriate a meaningful share of these revenues to the media which funds content origination.

At the end of the chain, informing the public costs a lot of money.

Anybody who’s ever had a news site beg them to stop using an ad blocker knows they’re desperate for revenue.

What do you say: should we tax Google and Facebook to keep our news outlets alive?

And if we don’t, what will the future internet look like?