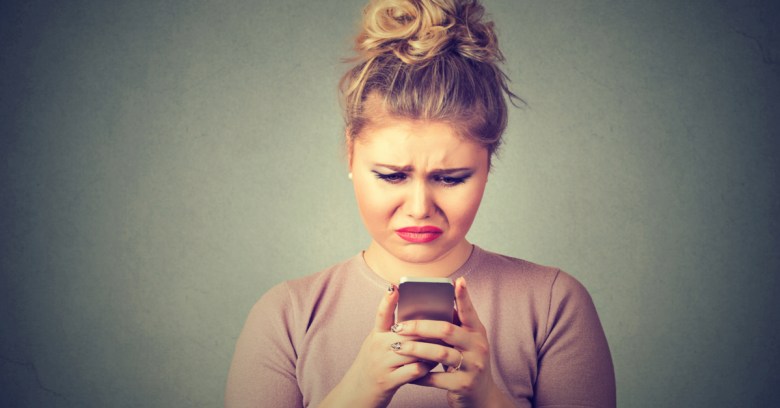 Here’s the experts’ take on how miserable or gleeful social media can make you:

Said soul-searching happened on Friday, when Facebook researchers posted what they deemed “hard questions” about whether or not social media is bad for us. Given that their hard questions leave out the “hey, how about if I just dump Facebook entirely?” option, those questions are, really, about as hard as tapioca pudding.

Here’s the spoiler: in the post, Facebook publicly recognized some of its platform’s detrimental effects but suggested the cure is to engage with the platform more: more messages, more comments and more posts.

The researchers believe self-affirmation comes from reminiscing on past meaningful interactions – seeing photos they had been tagged in and comments their friends had left – as well as reflecting on one’s own past posts, where a person chooses how to present themselves to the world.

And from that study:

…users gravitate toward their online profiles after receiving a blow to the ego, in an unconscious effort to repair their perceptions of self-worth.

That’s the bright side of the coin. On the darker side is social media-enabled trolling that can lead to problems as severe as suicide.

One of too many examples was that of Rebecca Ann Sedwick, a 12-year-old Florida girl who leapt to her death from an abandoned cement factory silo in 2013. One month after her suicide, the offline and online bullying that tormented Rebecca for over a year was still a sickening miasma thriving in venues such as Facebook, with two girls being arrested after one allegedly bragged on Facebook about cyber bullying the victim.

Of course, Facebook is well aware that its platform can be used both for cyber bullying and to post cries for help. In March, it announced that it planned to update its algorithms to keep an ear out for people who might be in danger of suicide, by looking out for key phrases and then referring the matter to human Facebook staff so they might ask whether the writer is OK.

The is-social-media-good-or-bad post from last Friday comes days after a former Facebook executive gave a scathing speech about the corporation. Chamath Palihapitiya, former vice-president of user growth, said that he regrets his part in building tools that destroy “the social fabric of how society works.”

The short-term, dopamine-driven feedback loops that we have created are destroying how society works. No civil discourse, no cooperation, misinformation, mistruth.

…a proclamation that followed an admission last month, from Facebook ex-president Sean Parker, that Facebook creators were from the start well aware that they were exploiting a “vulnerability in human psychology” to get people addicted to the “little dopamine hit” when someone likes or comments on your page.

It’s a social validation feedback loop… You’re exploiting a vulnerability in human psychology… The inventors, creators – it’s me, it’s Mark [Zuckerberg], it’s Kevin Systrom on Instagram, it’s all of these people – understood this consciously. And we did it anyway.

It’s not just Facebook; in the midst of the current analysis of fake news, Snapchat CEO Evan Spiegel, for one, has also been doing some introspection.

Friday’s post doesn’t ignore the research published on the negative effects of social media, but, perhaps unsurprisingly, it concludes that the good results/bad results boil down to how you use social media.

But what of the non-users? Such research does exist, of course.

These results were particularly strong for mental health; most measures of Facebook use in one year predicted a decrease in mental health in a later year. We found consistently that both liking others’ content and clicking links significantly predicted a subsequent reduction in self-reported physical health, mental health, and life satisfaction.

Don’t like that conclusion? No worries: another study from a year ago found that Facebook users tend to have higher levels of subjective happiness, life satisfaction and social support compared with non-users.

Facebook used its soul-searching post to announce some changes to its platform designed to help us do more of the things that make us happy, and to shield us from the things that don’t.

There’s no need to wait for Facebook to take the lead though. You probably started playing the social media game because it did something fun or useful to you. If it’s no longer doing that for you then maybe it’s time to ask some questions about which platforms and interactions are working for you, and which aren’t, and adjust accordingly.

And of course there’s always the option-that-dare-not-speak-its-name. As Naked Security’s Mark Stockley points out, if you walk away from Facebook, or social media “you might be missing out on something that’s potentially beneficial but you’re not missing out on something that homo sapiens hasn’t successfully gone without for 150,000 years or so.”