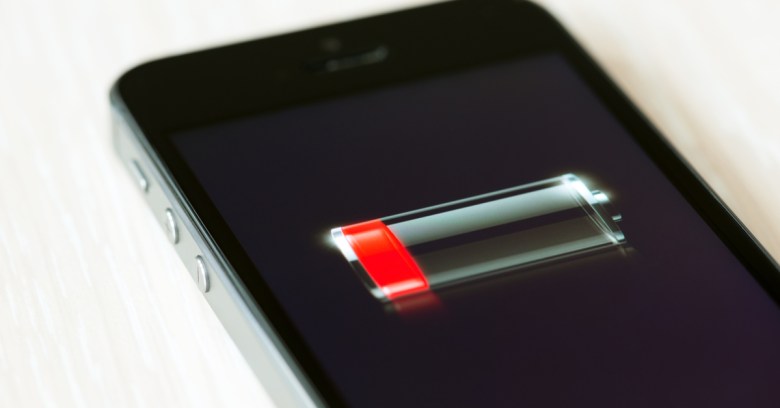 Since at least a year ago, users of certain iPhones began to report that their phones were randomly shutting off, even though their batteries showed that they were about 30% charged.

The iThing maker didn’t give much by way of explanation: just that it was affecting only “a very small number of iPhone 6s” manufactured between September and October 2015. Apple provided a serial number look-up to check whether a given handset was one of the iPhainting iPhones.

But no. Fast-forward a year – or perhaps crawl forward a year, depending on whether you’ve got one of those phones whose CPUs turned out to have been intentionally throttled by Apple in an effort to save their old lithium-ion batteries from power peaks that they couldn’t handle.

Redditor TeckFire put up a post in which he or she noted that their iPhone 6S had been very slow for a few weeks, even after updating.

TeckFire figured that it was just iOS 11, being awful. But when they used their brother’s iPhone 6 Plus, it was actually faster. TeckFire did some research, replaced the iPhone 6S battery, and, along with other older iPhone users, reported that the new battery actually made the phone run faster.

You’d expect battery capacity to decrease as batteries age. Older batteries need charging more frequently, for longer, and they don’t like being cold. And so it turns out that Apple has been quietly managing power in these older iPhones in order to spare the batteries.

Apple has confessed: It quietly put a throttle into older model iPhones – 6, 6s, and SE – to keep their CPUs sedated and to hence stop their doddering batteries from suddenly fainting.

The fix was included in the release of iOS 10.2.1 in January. It was a CPU speed limit designed to stop older model iPhones from demanding too much from batteries with diminished capacity, thus preventing the handsets from rapidly running out of power and shutting down. The fix was also included on the iPhone 7 as of December, with the release of iOS 11.2. It’s also on track to be rolled out to newer devices in the future.

Our goal is to deliver the best experience for customers, which includes overall performance and prolonging the life of their devices. Lithium-ion batteries become less capable of supplying peak current demands when in cold conditions, have a low battery charge or as they age over time, which can result in the device unexpectedly shutting down to protect its electronic components.

Last year we released a feature for iPhone 6, iPhone 6s and iPhone SE to smooth out the instantaneous peaks only when needed to prevent the device from unexpectedly shutting down during these conditions. We’ve now extended that feature to iPhone 7 with iOS 11.2, and plan to add support for other products in the future.

As TeckFire points out, Apple offers a $79 battery-replacement service. Many users haven’t realized it, but as TeckFire found out, swapping in a new battery will actually speed up these older iPhones.

Some have decried Apple’s save-the-batteries twiddling with CPU speed, suggesting that it’s all a ploy to get people to upgrade their phones before it’s absolutely necessary.

John Poole, founder and president of Primate Labs – the company behind the GeekBench software that TeckFire and others used to track iPhone performance – on Monday published an analysis of iPhone 6s and 7 performance in which he said that the CPU fix would reinforce users’ suspicions about planned obsolescence.

Poole also criticized Apple’s quiet, behind-the-scenes power management. He told The Register that it would have been better had Apple been upfront about it all:

If Apple had disclosed to people that it had to reduce performance because the battery was degraded. I think that would have gone a long way toward helping people understand.

Unfortunately, Apple can’t seem to win on this one. Either its operating systems are draining so much power with greedy apps that phones crash, making people unhappy, or the company creates a fix that causes phones to slow down but not to completely keel over unexpectedly… making people unhappy because they suspect it of hiding the truth about simply needing new (rather affordable) batteries.

2 comments on “Apple admits to slowing iPhones, you’re not imagining it”