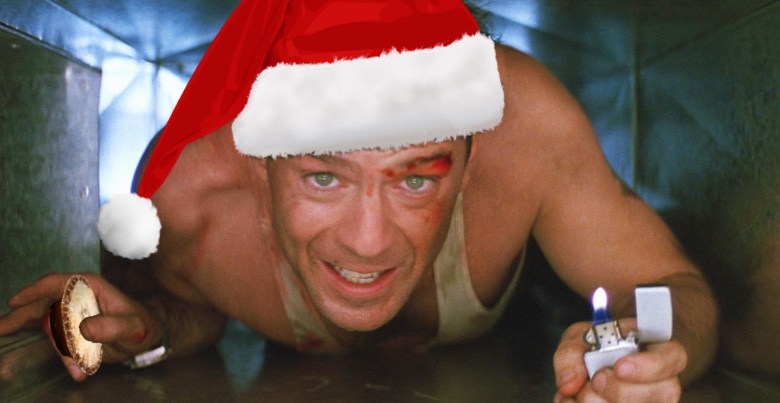 For most of my life, when the is-it-a-Christmas-movie-or-isn’t-it question erupted about the latest Die Hard offering, I have been firmly in the camp of “I couldn’t care less.”

This movie is just not my bag, and the flailing of poorly-held machine guns spraying fake bullets everywhere always makes me think of this ridiculous GIF and all the other — ANY of the other — movies I would rather be watching.

Inexplicably, it’s been put to me by the Naked Security team to make a decision one way or another about the questionable place of Die Hard in the Christmas movie pantheon.

So opine I will, though I will probably be grumpy about it.

Yippee-ki-yay, and all that.

Points for Die Hard being a Christmas movie

It’s the Christmas time of year, so we see all the accoutrements and obligatory seasonal activities, like a kid getting a ridiculously oversized Costco bear, harried travelers rushing around the busy airport, or employees getting hammered at their company holiday party. Indeed, amongst the ribbons and bows and Christmas trees, there’s even snow — though this being L.A. in the late 1980s, it’s cocaine. Still, I’ll give it +1 for all the Christmas fixings.

The music gives the movie occasional Christmas flair, complete with menacing sleigh bells — there’s a phrase I never thought I’d ever write in my life — when we see the title and opening credits. Some of the tracks are a menacing take on Christmas jingles when you pay attention to them, which was a nice touch.

Beethoven’s “Ode to Joy” makes a few appearances in this film too, a tune that some people believe is a Christmas melody, and I wonder if it’s Die Hard‘s fault for that? Probably giving it too much credit there. +0.25 on this, because “Ode to Joy” will never be a Christmas tune to me, and I automatically resent any movie that uses it as an audio shortcut for “hey you dummies this is a fancy party.”

A separate +0.4 for Argyle playing Run-D.M.C.’s Christmas in Hollis though. It’s a great nod to Christmas in the 1980s.

The terrorists, led by the wonderful Alan Rickman as Hans Gruber, who lends this movie way more gravitas than it deserves, are carrying out their mission in the name of money and make a play about how their violence is justified in the name of taking down a huge, corrupt multinational corporation. (Hello there, Mr. Robot.)

Only one lone good guy, acting against the odds, coming down the chimney, errrrm, air duct vents can set things right and save the day. So +2 for being oddly on point with the whole Santa thing when I completely overthink it, and +0.5 for the Mr. Robot allusion.

A decent amount into the movie, we see a corpse with “now I have a machine gun, ho-ho-ho” written on his shirt and a Santa hat resting on his head. It’s gruesomely funny in that dumb late-1980s action film way, but a nice little reminder about what time of year it is – because by that point we probably forgot and were just enjoying the splatter. +0.1 for that.

+0.3333 for giving us Sgt. Al Powell by the always delightful Reginald VelJohnson, because I fully subscribe to the fan theory that his redemption in killing the Karl terrorist guy at the end makes him completely snap, take on the name of Carl, and then move to Chicago in trying to escape all that (giving us the early 1990s sitcom Family Matters) — where his unending guilt about the kid he supposedly killed manifests in the persona of Steve Urkel. It’s a completely bananas theory that I have to believe is true with every fiber of my being. And if Die Hard is responsible for giving us Family Matters, then I must pay tribute accordingly.

Die Hard did introduce “make barefoot fists with my toes” to the lexicon and that absolutely has to count for something. +2.71828 meaningless points

Points against Die Hard being a Christmas movie

I should note that while trying to watch this movie, in another room my mother was playing the cassette (yes, cassette) of the music from “The Snowman” with my daughter. (Fellow Americans, I’m referring to the 1982 animated classic The Snowman about the sad, steady march towards our inevitable death and yet also Christmas, not the 2017 action film of the same name but no other similarity.)

So while watching Die Hard, the very-obviously-to-do-with-Christmas music from The Snowman ran faintly underneath all the dialog. You’d think this might lend the film extra Christmas spice, but I have to tell you, hearing Walking in the Air while Hans Gruber slow-fell off Nakatomi Tower… still wasn’t terribly Christmassy. It was hilarious though — hearing those cherubic voices as Alan Rickman’s face slo-mo registers that he’s falling and NOT flying through the air is almost transcendent. (Here, I’ve gone and mashed it up for you.) A solid -6.022 for this serendipitous but hilarious fail.

-1 to this entire movie for making me feel bad that I don’t speak any German. Having been stuck at Munich airport many times for six-hour layovers, you’d think I’d have picked some up by now.

Overriding all all the arithmetic so far in this article, -1024 for all the earlier-mentioned gore and splatter.

Die Hard is a classic late 1980s action flick, no question there, replete with late 1980s action flick over-the-top gruesome practical effects of people being shot to pieces. That doesn’t seem terribly Christmas-appropriate, but maybe “maul your enemies with terrible bullet trauma” was a part of a director’s cut of It’s a Wonderful Life that I’ve somehow missed.

It boggles my mind that any movie with this amount, let alone any amount, of gratuitous violence is in the running for consideration as a family Christmas movie.

So adding up all the points in columns for and against… meh.

Die Hard isn’t a redemption film about a family getting back together in time for the holidays and discovering what’s really important – nobody remembers that about this movie.

In the end, Die Hard is about an irrational person (Gruber) making completely unreasonable and expensive demands of flummoxed, time-crunched adults.

12 comments on “Is Die Hard a Christmas movie? – the (not a) security review”