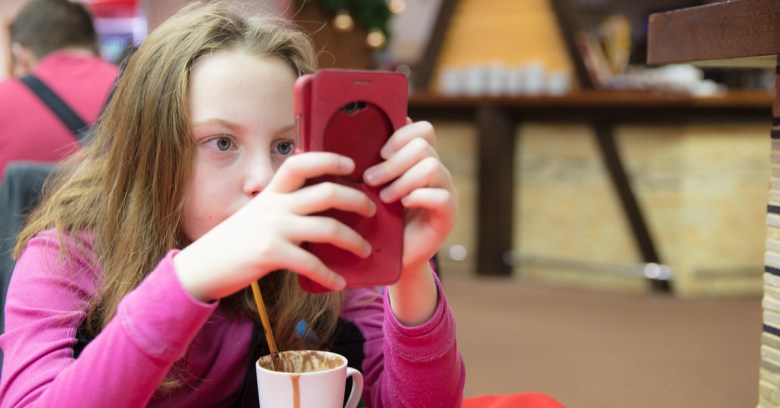 It’s the most beautiful, satisfying, relaxing thing I’ve ever seen, and it proves that children are geniuses, because they’re smart enough to make it and smart enough to watch online slime videos.

If you’re like really stressed or something and you watch a really satisfying slime video it makes you like calmer.

So that’s one of many plus sides of how kids – the under-13 crowd – are using social media. They say it takes their minds off things, too: “If you’re in a bad mood at home you go on social media and you laugh and then you feel better,” says 10-year-old Kam.

But according to a Children’s Commissioner report that looked at social media use among 8- to 12-year-olds, children aren’t getting enough guidance to cope with the emotional demands that social media puts on them.

For instance, many children interviewed for the report were over-dependent on “likes” and comments for social validation, according to researchers. They spoke to 32 children in eight focus groups, each including two friendship pairs, grouped by age and gender. The report says that the friendship pairing was done to enable the children to “open up with more confidence during the research, and to allow for insight around peer dynamics and other social factors to emerge more naturally.”

These are some of the things the kids said about getting social validation from social media:

I just edit my photos to make sure I look nice.

My mum takes pictures of me on Snapchat… I don’t like it when your friends and family take a picture of you when you don’t want them to.

I saw a pretty girl and everything she has I want, my aim is to be like her.

Speaking to the BBC, Children’s commissioner for England, Anne Longfield, called on schools and parents to prep children emotionally for what she called the “significant risks” of social media as they move schools and meet new classmates, many of whom have their own phones.

As it is, pretty much everything kids are doing on social media has pluses and negatives. Take, for example, when kids follow their family members. The report cited these positives given by the children they interviewed:

It’s really when they hit secondary school that all of these things come together.

They find themselves chasing likes, chasing validation, being very anxious about their appearance online and offline and feeling that they can’t disconnect – because that will be seen as socially damaging.

She suggested compulsory digital literacy and online resilience lessons for year six and seven pupils (10 – 12 year olds), to teach them about the “emotional side of social media”. She also suggests that parents should help kids to “navigate the emotional rollercoaster” of the negative aspects of social media.

The BBC also spoke with Matthew Reed, chief executive of the Children’s Society, who urged parents to have “open conversations” with their kids about the sites and apps they use:

This can include looking through their ‘friends’ lists together and finding out how their child knows different people.

Check their privacy settings and get children to think about what information and photos they are comfortable with others having access to.

On the plus side, the report found that staying safe online was a priority for the younger children – age 8 to 11 – the researchers interviewed.

Most of the children had strict rules about what they can and cannot share online, which seemed to be a strong reflection of the safety messages they receive from their parents and schools. In this context, ‘safety’ was understood as protecting oneself from strangers, online predators, cyber-bullying and ‘bad’ things people share, such as swearing or violence.

Of central importance was the need to ensure they do not reveal any personal identifiable information, such as where they live or where they go to school, through the images or content they share. Many talked about specific strategies they use to protect themselves, such as never revealing their school uniform or never showing their house number in photos. Some also said they are always careful to make sure the background in their photos doesn’t easily give away what their home looks like.