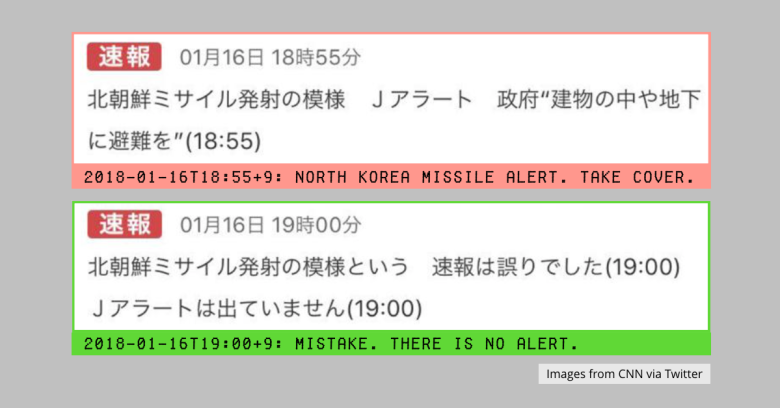 NHK is apologizing after issuing a false alert that said North Korea had probably launched a missile and warned people in Japan to take cover.

The false message was sent in Japanese shortly before 7 PM local time on Tuesday. It went out through the public broadcaster’s Japanese apps and website.

A few minutes later, NHK corrected the wrong information. There are no reports of problems caused by the mistake. NHK says a switching error is to blame.

The incident comes just days after officials in the US state of Hawaii issued a false missile alarm and caused panic.

In the Hawaii incident at the weekend, a public servant who was supposed to perform a routine test of the state’s missile warning system apparently selected the “send real alert” option instead.

Despite the dreadful implications of a real alert, and the unlikelihood of a real alert compared to the regularity of a test alert, there was apparently no additional oversight needed – no supervisor approval or peer review requiring confirmation from a second person.

However, there was a precaution in place in Hawaii to prevent the inadvertent cancellation of warnings.

Ironically, therefore, the person who was trusted to broadcast a state-wide missile alert to phones, TVs and radios wasn’t authorised to cancel it, even after realising the error.

The result was a 38-minute delay before Hawaiians who had reacted to the shocking news were able to relax – assuming they hadn’t hidden themselves in an underground bunker with no mobile phone coverage, of course.

According to CBS News, the Japanese mistake was “an error by a staff member who was operating the alert system for online news”.

That’s all we know at the moment, but it sounds very much like the nightmare of every sales engineer who was ever asked to show off a new product to a prospective customer: a live demonstration gone wrong.