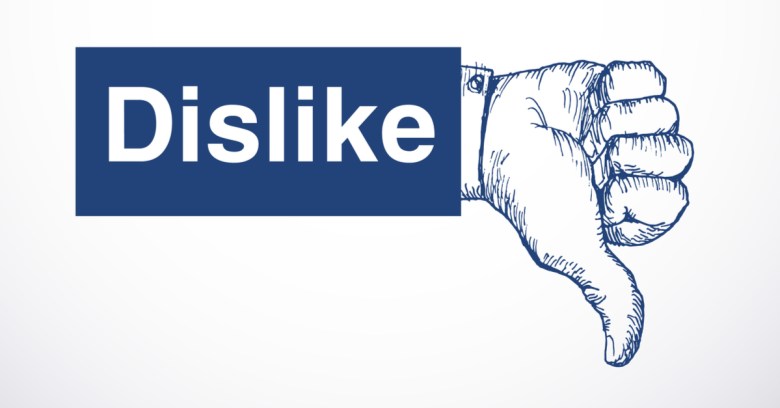 You know all those flimsy rumors about Facebook creating a dislike button?

Just when you’re getting ready to crack a joke about really needing a bang-your-head-on-the-desk button to be deployed in cases of Facebook hoaxes (like this recent one), one spotting of a dislike button turns out to be real.

Kind of. Sort of. Well, not really, said Facebook, responding to questions about fleeting glimpses of something spotted in the hinterlands of the US (as in, on about 5% of Androids, according to Business Insider) that’s somewhat like a dislike button.

A Facebook spokesperson told Business Insider that it’s a limited test, and it’s not a dislike button:

We are not testing a dislike button. We are exploring a feature for people to give us feedback about comments on public page posts. This is running for a small set of people in the US only.

Yup, it is most certainly not an upside-down thumb, as Facebook said. It’s a “downvote” button, as you can see:

I now have #FacebookDownvote on sponsored posts in my feed! #smm #socialmediamarketing #socialmedia #digitalmarketing pic.twitter.com/BKZyS25ZEZ

It was first spotted by Taylor Lorenz of The Daily Beast. She reports that the downvote option appeared for several users on Thursday in the comment section of posts within Facebook groups and on old Facebook memories content.

This shouldn’t be much of a shocker. Facebook founder Mark Zuckerberg said back in 2015 that Facebook was working on offering more options than “Like.” And indeed, since 2015, we’ve had weepies, love hearts, laughing, Wow! and steamy red angry faces: all emoji reactions that are less of an emotional hammer than thumbs-down.

Of course, that’s what Facebook wants: it wants to be our happy place. With the experimental downvote option – which appeared underneath comments on posts, next to the “like” and “reply” buttons, on select Android users’ accounts – it’s enlisting users to help Facebook keep it sunny.

Here’s what I see on my end if I click downvote, but since I don’t know anyone else with the feature I don’t know what it might look on their end. #FacebookDownvote pic.twitter.com/YIxI5xgXeU

Well, that’s one way to fight the scourge of fake news, I guess. Unless, of course, people use it to gang-downvote a comment just to be cyberbullies and/or to tinker in elections.

That will remain to be seen: as it is, Facebook says it’s not planning to expand the test.

After the debacle with its fake news flag – it admitted last month that it was making things worse, like waving a red flag in a bull’s face – let’s hope it hits on a solution to fixing its woes soon.

4 comments on “Facebook is not testing a dislike button, except for the one it’s testing”