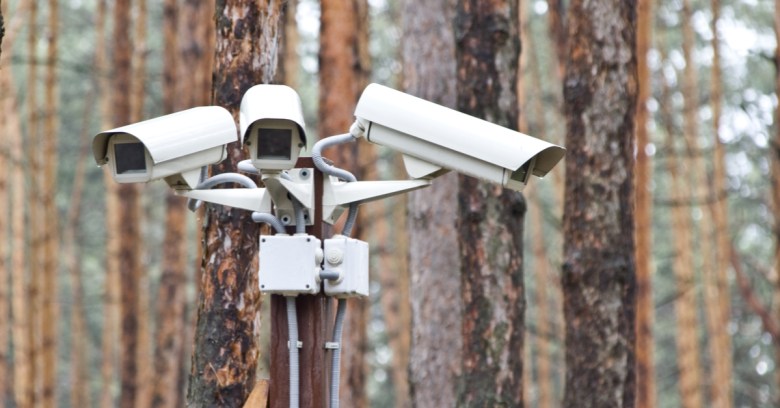 Texas has constructed a wall along its 1,200-mile border with Mexico.

Not Donald Trump’s wall, mind you: rather, the Department of Public Safety has created a surveillance wall, made up of hundreds of cheap video cameras, giving border sheriffs live video coverage so they can keep an eye out for smugglers and traffickers of drugs and humans. The department calls it Operation Drawbridge, and it consists of low-cost, off-the-shelf wildlife cameras with motion detection and low-light capability.

24×7 monitoring: it’s a steal at these prices, the department says:

At approximately $300 per camera, they provide a high-tech capability at a low-tech cost.

Maybe so, but it might cost the state a bit more than that, depending on the outcome of a lawsuit filed by the owner of a ranch who found what he and his lawyers suspect is one of the Operation Drawbridge cameras strapped about 8 feet up on a mesquite tree on his ranch.

He didn’t know what it was or how it got there, so Ricardo Palacios, a 74-year-old rancher and attorney, took it down.

No dice, Palacios told them all, so they threatened to arrest him.

Oh yea? Well, how about this instead: Palacios turned the tables and quickly sued both agencies before they could prosecute him, accusing them of trespassing on his land and of violating his constitutional rights. His lawyer, Raul Casso, called the agents’ behavior “creepy” in a complaint and said it smacked of 1984:

Plaintiffs maintain that there is something creepy and un-American about such clandestine, surreptitious, 1984-style behavior on the part of Defendants – officers of the law.

Just like that camera and the agents who stuck it in that tree, the federal lawsuit is treading on contentious territory, raising questions about what limits there are to the government’s power to conduct surveillance in the name of border security on private property, without the landowner’s permission.

Or, in the case of Palacios, with the landowner’s repeated orders, over the course of years, to get the hell off his land.

Beyond just this one surveillance camera, there’s a history of confrontation between Palacios, his sons and the CBP. As Palacios described it in his complaint, the troubles began in 2010 at a CBP checkpoint 29 miles north of Laredo, Texas.

His sons were heading home to their ranch, which is about 6 miles north of the checkpoint. When the CBP asked Richard D. Palacios Jr. where he lived, he refused to tell them. He was sent to a secondary inspection, at which point about 10 government agents allegedly grabbed him and body-slammed him to the ground, according to the complaint, also roughing him up after he was taken to a detention cell at the checkpoint station.

After 90 minutes in detention, he was released.

In the years that followed, Palacios Sr. claims that government agents continually trespassed on his land, shone lights in the window of his son’s house, opened gates, lied about having been granted a key to do so, trained night-scope cameras toward their houses and land, and told him that they could do whatever they liked when Palacio tried to order them off his property.

Could they? Well, that depends.

Palacio’s ranch is situated north of the Mexican border. Exactly how far away is of utmost importance when it comes to what rights you have in the US, where it’s commonly said that borders are a “Constitution-free zone”. According to federal law, agents don’t need warrants to search private property that’s located within 25 miles of a border, “for the purpose of patrolling the border to prevent the illegal entry of aliens into the United States.”

If Palacios’ ranch were within that range, he wouldn’t have a leg to stand on, given that it would be within the we-don’t-need-no-stinkin’-warrants zone. But when Palacios used the “My Map” facility at the Texas General Land Office to measure the distance, he found that his property is about 27.5 miles away from the nearest bend in the Rio Grande (the southern border) as the bird flies.

Those 2.5 miles are a razor-thin margin in which to demand that government agents require a warrant or probable cause to conduct a search. But as far as Palacios and his lawyers are concerned, that’s enough for them to hang onto that surveillance camera. That, and his constitutional right to privacy and Fourth Amendment protection against unreasonable search.

His lawyers have the camera and are trying to request that it be formally introduced as evidence. They believe that the camera Palacios took down from the mesquite tree is part of Operation Drawbridge and that it’s one of some 4,000 such cameras arrayed along the border. They’re hoping the lawsuit can get the feds to stop barging in on Palacios’ yard and planting surveillance gadgets as they wish.

Our lawsuit is that we want a federal judge to tell the border patrol and the feds to not go on [Palacios’] property without permission or probable cause. And if you all are going to keep doing that, you’re going to have to pay for it. It’s called the right to be left alone. That’s what the Fourth Amendment is all about.

Both the CBP and the Texas Department of Public Safety have declined to comment on the lawsuit. As Ars Technica reports, Texas officials have claimed qualified immunity: a legal doctrine that protects law enforcement officials.

No hearings have been scheduled yet.