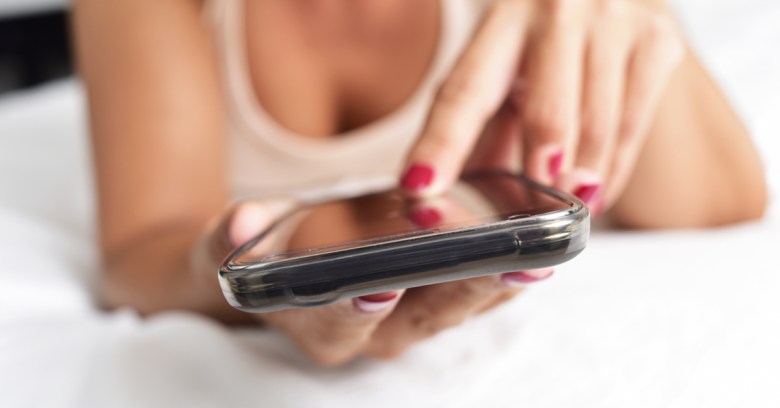 The chances that somebody younger than 18 has received a sext is now at 27.4%, according to a new meta-analysis of 39 studies published by JAMA Pediatrics on Monday.

The chances that they’ve sent a sext, though, is only 14.8%. So how is it that nearly twice as many young people have received explicit content than have sent it?

Some researchers have suggested that the discrepancy could have multiple causes: some respondents may underreport their active engagement in sexting, some sexters may send the same picture to multiple people, and/or those who receive a sext might not reciprocate.

At any rate, it’s one of the many nuances that need more study, according to researchers led by psychologist Sheri Madigan of the University of Calgary. The team sorted through dozens of studies to select the 39 they focused on: studies they deemed to be comparable and of high quality.

The studies, which were largely completed between 2008 and 2016, involved a total of 110,380 participants between the ages of 11.9 and 17, with a mean age of 15.2. Most studies were conducted in the US or Europe, along with one each from Australia, Canada, South Africa, and South Korea.

The researchers concluded that 1) with every passing year of age, it becomes more likely a young person will have received explicit images, videos, or messages; and 2) sexting is on the rise.

Conclusions from studies on the prevalence of youth sexting over the years have been all over the map: from 1.3% to 60%. That’s making it tough for healthcare professionals, schools, policymakers and parents to know how much they should worry about the behavior or to figure out what exactly they should do about it, the researchers said.

Likewise, research into who texts more – boys or girls? – has also been inconsistent, but the meta-analysis concluded that sexting appears to be evenly divided among genders.

Regarding sexting rising with age, here are some specifics picked up on by various studies both within and outside of the 39 studies the meta-analysis took under consideration:

Psychologists Elizabeth Englander and Meghan McCoy from Bridgewater State University wrote in an editorial accompanying the meta-analysis that youth sexting, with the broad range of sexting behaviors, motivations, and outcomes it spans, might provide too much material for one review to cover.

They said that when sexting rose along with the ubiquity of mobile phones, its prevalence among the under-18 crowd was viewed as a critical topic. That was particularly true given various high-profile prosecutions of those who engaged in felonious sharing of nude images depicting minors.

You might remember some of the more ridiculous court dramas from those days: say, the sexting teen who was accused of sexually exploiting himself in 2015. (He and his girlfriend were eventually punished by being banned from using their phones for a year.)

Englander and McCoy noted that times have changed: at least in the US, sexting between minors is generally not prosecuted. Nowadays, it’s seen more as “a psychological and developmental concern rather than a legal risk,” they said.

But then again, it’s one thing to sext within a relationship. It’s another thing entirely when material is shared without the subject(s)’ permission: such abuse gets into the much uglier realms of peer bullying or harassment, trouble with parents or school authorities, or having the picture posted online.

The meta-analysis found that in a few studies, researchers noted that most people who sext felt it was a positive experience. Those positive feelings are apparently often associated with sexting within established relationships.

Unauthorized redistribution of sexts is, fortunately, not the norm: less than 5% of people who sext reported negative outcomes. One in eight, or 12.5%, of young people reported that they’ve forwarded a sext. And, not surprisingly, the likelihood of a negative outcome such as unauthorized sexting appears to increase when people who sext report that they did so under pressure.

While 5% may seem low, we know that the results of bullying associated with unauthorized sharing of sexual content can be tragic.

To prevent the negative outcomes that encompass everything from harassment to suicide, Englander and McCoy said that we’ll need more studies of rapidly evolving sexting behavior:

The accuracy of our understanding about it defines our prevention and intervention efforts.