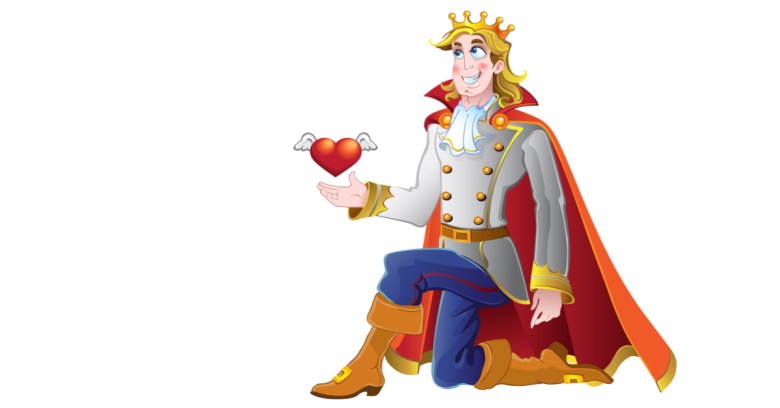 Well, ooo-la-la, “Martin,” you silver-haired fox, I just love your dating profile photos. I’m so sorry for the recent loss of your dog – what a cutie! But I’m super touched by the one where you’re doing something or other with pastries and jam, for a charity – awwww!

You’re just the man for me – you hot, sensitive, caring thing. You’re mature, plus that photo of you in the swimming pool in Mykonos shows you’ve stayed in shape since your wife died, and… wait one minute!

What’s that you say? You’re happily married? …And gay??!!

It turns out that the photos are actually of Steve Bustin, 46, currently happily married to his husband. They live in Brighton in the UK. Scammers have been using his photos to woo women since 2016.

Over the weekend, Bustin got so sick of being contacted by confused women that he decided to devalue the photos by telling The Times that he’s never visited a dating site and that he’s not going to be making some heterosexual woman’s dreams come true, given his aforementioned husband.

These are some of the captions the scammers slapped on the ripped-off photos:

The dog was mine but he passed last year.

The one with my face painted was Halloween.

The one with the pastries and jam was to raise funds for charity.

The one with me and just the woman is my late wife.

Lies, lies, despicable lies. Bustin told the Times that the romance scammers had used his likenesses to “construct a profile of my whole life”:

Someone has been harvesting images of me from all over the web.

The photos go back as far as 2012, to the photo of Bustin in a pool while he was on holiday in Mykonos, Greece. The most recent photo is from a Halloween party in autumn 2017.

A scammer going under the name Martin Peterson was using those photos, trying to pull the wool over the eyes of a 60-year-old widow. She allowed The Times to print her photo but not her name.

She told the publication that the scammer first contacted her on 29 January. He/she was using photos stolen from a social media site. The woman grew suspicious a few days later, when “Martin” claimed to be on holiday in Dubai and sent her photos supposedly of him having breakfast, then in the swimming pool. Funny thing, she noticed: his hair went from salt and pepper to silver, and the photos made it look like he’d gotten chubbier.

What followed was more song and dance: a purported passport photo, a video of Bustin on a Skype call (with the scammer’s voice superimposed) for a “live” conversation, an invitation to move into his home in north London barely two weeks after their initial phone conversation.

It was that invitation that led the woman to do a bit of forensics – she did a reverse image search. That’s what led her to Bustin: a former BBC News producer who now works as a speaker and as a speech and media trainer. The Times quoted her:

I thought I’d found my Prince Charming. I was really taken in. He used to seem so kind. He’d send me music and say: ‘Do you like the song? Do you like dancing?’ I feel a total idiot.

For Bustin, it was an “Oh no, here we go again” situation. In July 2016, Birgit Hebibi, 54, who lives in Berlin, had contacted Bustin to let him know that she too had been snookered by a scammer using his identity. Hebibi told The Sunday Times that she’d been contacted by “Sebastian,” who claimed to be British and working in Thailand. Smart cookie: she broke it off when he started asking her for money.

Then, a year ago, he heard from a woman who went by the name Isobel on dating sites. She told Bustin that “Christian Hansen” had wooed her on EliteSingles, again hiding behind his photos. She took it up with the site, which apologized, admitting:

It does appear that this individual was able to slip under the radar.

Bustin said he’s been increasing the privacy settings on his social media posts, but hey, he’s a public figure: he’s got to put himself out there with an active public profile.

How to vet Prince Charming

Nobody should be embarrassed by falling for one of these scammers. They know what we want to hear, and they know how to sound sincere – to the point that they can convince their targets to ignore the warnings of family and friends who smell a rat. Like, say, the 79-year-old accountant who fell for a Nigerian email scammer so hard that he bilked a friend out of £151,000 ($184,000) to come to the rescue of a “girlfriend” he’d never actually met. Even at trial, he still staunchly believed all the romantic bilge “she” pumped out.

We’ve got to keep in mind that embarrassment and financial fraud aren’t the only things that can happen to us if we fall for these come-ons. In October 2016, the accountant was found guilty of fraud by misrepresentation – for deceiving his bilked friend by lying about his “relationship” with the scammer – and was sentenced to 18 months in jail.

Then there was the woman who got dragged into an Argentinian prison for 2.5 years, for unwittingly attempting to smuggle cocaine sewn into the lining of a suitcase at her “lover’s” request.

The FBI has a term for these liar-bags: sweetheart swindlers. These are the warning signs the FBI says we should keep an eye out for to spot somebody who’s trying to con us, our family or our friends:

If you, or the intended victim, still isn’t convinced, a powerful tool is the one used by the 60-year-old widow to find out who “Martin” really was: run a reverse image lookup search to see where else Prince Charming or Princess Distressed and Broke Maiden has been hanging out online.

It’s free, and it’s instructive: you could well find the photo a fake friend has used, perhaps even posted on sites devoted to exposing the fraudsters who use the same images over and over – typically, stolen images.