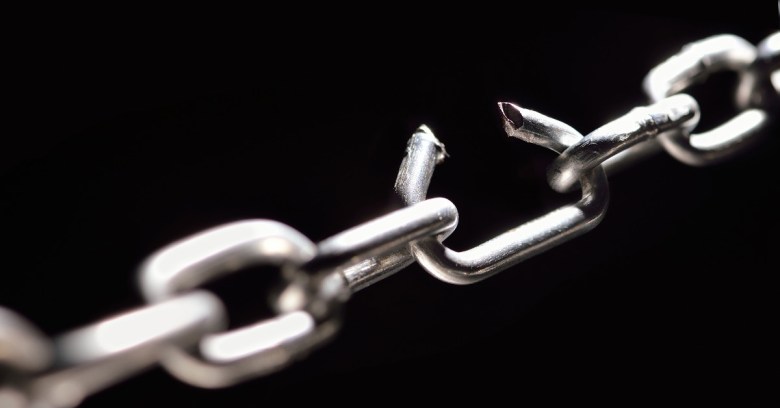 Researchers from Germany’s RWTH Aachen and Goethe universities claim to have discovered links to child abuse images embedded within the Bitcoin blockchain.

The links were uncovered during an analysis of the non-financial content that users have knitted into the blockchain.

The blockchain is a ledger that records of all of the Bitcoin transactions that have ever taken place and it’s designed to make deletion of data a nearly-impossible task.

It does this by making sure that every one of the ten thousand or so Bitcoin node operators (individuals or organisations who validate bitcoin transactions and blocks) has a complete copy of it.

There are node operators all around the world, in many different legal jurisdictions.

The researchers believe that the presence of the non-financial content they’ve discovered, and the absence of barriers preventing something even worse, could make possession of the blockchain illegal:

While most of this content is harmless, there is also content to be considered objectionable in many jurisdictions, e.g., the depiction of nudity of a young woman or hundreds of links to child pornography. As a result, it could become illegal (or even already is today) to possess the blockchain

Although court rulings do not yet exist, legislative texts from countries such as Germany, the UK, or the USA suggest that illegal content such as child pornography can make the blockchain illegal to possess for all users

As of now, this can affect at least 112 countries … This especially endangers the multi-billion dollar markets powering cryptocurrencies such as Bitcoin.

The ability to store non-financial data is part of Bitcoin’s design.

The researchers’ search through Bitcoin’s stash of non-financial data uncovered 274 links to websites hosting images of child abuse, of which 142 were so-called Dark Web sites (Tor hidden services). They also discovered an image embedded into the blockchain that depicts “mild nudity of a young woman” whose age is uncertain.

Alongside the links and images, they also claim to have uncovered a bizarre collection of other digital artefacts – discoveries that highlight the pros, cons and potential for legal landmines that this kind of storage creates.

The following items are just some of the things lurking inside every single copy of the blockchain:

It’s a collection that raises questions (different questions, in different parts of the globe) about intellectual property, copyright, data privacy and data retention.

For example, in the European Union individuals have a right to ask for their personal data to be deleted if it’s not needed, or if it has been used unlawfully.

How will that work on an ownerless system that’s designed to be the digital equivalent of engraved stone tablets?

Deleting things from the blockchain isn’t impossible, but it is extremely hard (which is, of course, entirely the point) because every block of transactions is cryptographically linked to the blocks that came before it.

In order to delete some unwanted data from the blockchain, 51% of the nodes on the Bitcoin network would have to agree to the deletion, and then recalculate all of the blocks that had been added to the blockchain after the original insertion of unwanted content.

If you want to delete something that was added two years ago then 51% of the nodes on the network have to redo two years’ worth of transactions (that’s a number in the hundreds of thousands).

And they can’t share the work of that recalculation between them – all of the nodes, thousands of them, would each need to redo all of that work independently.

Bitcoin bookkeeping is designed to be really hard work for computers, and the global Bitcoin network already consumes a vast amount of electricity just keeping up with business as usual (estimates go as high as 30 TWh per year).

For Bitcoin users, breathless analysts and blockchain-based startups, the technology’s lack of central control is a blessing. For node operators, it could yet prove to be the opposite.