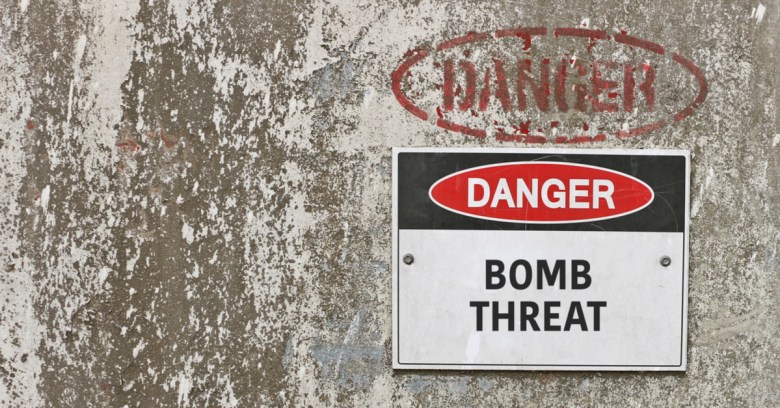 A bomb threat email sent to about 400 schools and colleges in the UK is believed to have been a hoax sent by disgruntled Minecraft players who wanted to smear a rival’s server.

According to Sky News, some 24,000 threatening emails were sent, causing hundreds of schools to evacuate on Monday.

The messages looked like they came from Minecraft server VeltPvP, but the company said the account had been spoofed and that the company had nothing to do with it. VeltPvP apologized, saying that it’s being “harassed by a group of cyber criminals that are trying to harass us in anyway possible.”

We have nothing to do with the bomb threats that were sent out to the 400+ UK schools.

We've been being harassed by a group of cyber criminals that are trying to harass us in anyway possible.

We're extremely sorry for anyone who had to deal with this, but just know it's fake.

North Yorkshire Police said in a statement that the bomb threats are considered to be a hoax.

Our Cybercrime Unit Detectives, supported by local officers, have looked at these incidents and it is not believed there is any genuine threat.

Humberside Police said 400 schools were affected across the country.

We have spoken to all schools who have contacted us, reassured them that there is no need to evacuate and offered them security advice.

I want to reiterate that there is not believed to be any direct threat following these reports which at this stage are believed to be malicious hoax communications.

Sky News talked to somebody who it believes is one of those responsible for the emails. He said that the threats were meant to get the VeltPvP domain suspended.

Those involved in the gaming spat have claimed that their opponents have engaged in illegal acts to harass them.

One of the gamers allegedly behind the bomb threats accused VeltPvP of launching distributed denial of service (DDoS) attacks and of targeting other rival Minecraft servers. The gamers are also reportedly flinging abuse at each other via images and videos portraying individuals connected to VeltPvP.

What that network has done is horrible.

You know what else is horrible? Terrifying children, their parents, their teachers and school personnel in 400 schools, all over a petty gaming squabble.

Horrible indeed. He told Sky News that he regretted frightening the children whose schools were evacuated:

It is horrible, it’s not the nicest thing.

The person purported to be behind the bomb threat, believed to be in the US, also told Sky News that he understood he could be arrested.

There are undoubtedly a horribly large number of people who hope that happens very soon, before more schoolkids gets pulled into this mean-spirited, petty squabbling.