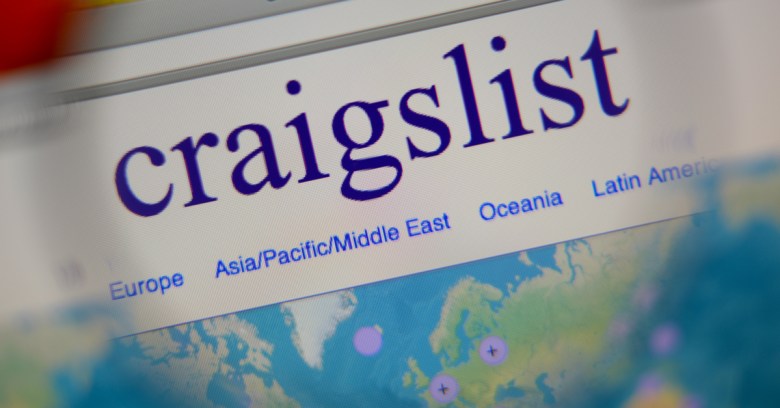 Craigslist shut down its personals section on Friday in response to the passage of H.R. 1865, the Fight Online Sex Trafficking Act (FOSTA) bill, in both houses of Congress on Wednesday.

Ditto for some related subreddits. Both moves have likely been taken to avoid lawsuits in the wake of the government gutting the law that protects online sites and services from responsibility for content posted by users.

Reddit announced on Wednesday that it would ban subreddits having to do with certain transactions, including “paid services involving physical sexual contact.”

For its part, Craigslist posted this statement on Friday:

Any tool or service can be misused. We can’t take such risk without jeopardizing all our other services, so we are regretfully taking craigslist personals offline. Hopefully we can bring them back some day.

To the millions of spouses, partners, and couples who met through craigslist, we wish you every happiness!

Happiness? There’s a long list of people who are not happy with this bill, which makes online prostitution ads a federal crime and amends Section 230 of the Communications Decency Act (CDA). Section 230 states that websites are immune from legal responsibility for content submitted by others.

Here’s an extremely truncated list of who’s against this bill:

Constitutional law experts, including the Department of Justice (DOJ). In passing the bill, Congress ignored the DOJ’s warning that it was so poorly drafted that it would actually make it more difficult to prosecute sex traffickers. The DOJ also called into question whether the bill would pass Constitutional muster.

Notre Dame law instructor Alex F. Levy said in a guest post on Eric Goldman’s Technology & Marketing Law blog that the bill will likely run into trouble in the courts, given that it affects constitutionally protected speech. Critics note that the bill flattens all the differences between, for example, sites that sell trafficked victims and sites devoted to support for the victims who’ve escaped their captors, as well as failing to differentiate between consensual and non-consensual sex work.

Unlike the [Campus Sexual Violence Elimination Act, or SAVE Act], which prohibits the knowing advertisement of trafficked sexual services, this statute implicates constitutionally protected speech.

The Electronic Frontier Foundation (EFF) said FOSTA is “a bill that silences online speech by forcing internet platforms to censor their users.” The EFF noted that this amendment to Section 230 is particularly worrying because…

[It’s] the most important law protecting free speech online. Section 230 protects online platforms from liability for some types of speech by their users. Without Section 230, the internet would look very different… in absence of Section 230 protections, noncommercial platforms like Wikipedia and the Internet Archive likely wouldn’t have been founded given the high level of legal risk involved with hosting third-party content.


Sex workers have spoken out too, explaining how online platforms have literally saved their lives. Why didn't Congress consult with the people their bill would most directly affect? #LetUsSurvive https://t.co/Dz54Ebk159

From Alana Massey, writing at Allure:

These bills* target websites that are widely and inaccurately believed to be hubs of trafficking activity when it is precisely those websites that enable people in the sex trades to do their work safely and independently, at the same time as they make it easier for authorities to find and investigate possible trafficking cases.

Massey says that the bill will criminalize the very websites where she found “the generous communities and actionable advice I needed to get out of and avoid exploitative sex work situations.”

Though the bill is meant to target sites hosting sex work advertisements, it covers online forums where sex workers can tip each other off about dangerous clients, find emergency housing, get recommendations for service providers who are sex worker-friendly, and even enjoy an occasional meme. These are often on the same websites where advertisements are hosted.

Before you say, ‘Just get rid of the ads, then,’ know that online ads themselves are one of the greatest tools for protecting yourself as a sex worker: They make it possible to screen clients, arrange safe indoor working conditions, and establish a communication record with clients that street-based work doesn’t provide.

On the lawmaker side, those against the bill are scant:

Only two senators. Sen. Ron Wyden (D-Oregon), from the Senate floor on Wednesday, as quoted by Reason:

In the absence of Section 230, the internet as we know it would shrivel… Civic organizations protecting their right to free speech could be [ruined] by their more powerful political opponents [and] there would be an enormous chilling effect on speech in America.

Wyden said that’s why big, established online players like Facebook supported the bill: “Because it would pull up the ladder in the tech world” and keep out new companies that can’t afford to get in.

The only other senator to join Wyden in his “No” vote was  Rand Paul (R-Kentucky).

With all these opponents voicing clear-eyed reasons about why the bill isn’t the way to achieve what it sets out to do, why did it sail through with a 97-2 vote?

This tweet, from Senator Dianne Feinstein, sums it up:

The passage of SESTA/FOSTA, now awaiting President Trump’s signature – he’s applauded the bill as “an important step forward” – was hailed by some anti-sex-trafficking groups and law enforcement as an important tool to fight online prostitution of teenagers.

It’s easy to see where the impulse to gut Section 230 comes from. Young women who’ve been prostituted on Backpage – an online classifieds site – have been blocked when trying to sue the website, with courts specifically citing Section 230 as protecting such sites from liability.

Section 230 is (or was, depending on how the president’s signature goes) a strong legal shield to protect websites from being held liable for what others do online, but the majority of Americans disagree with the premise. According to a 2017 report from the Pew Research Center, 79% believe that online companies and platforms should be held responsible for users’ behavior or content.

That’s borne out by a star-studded public service announcement in which comedian Amy Schumer calls Section 230 a “stupid loophole.”

Note that while some anti-sex-trafficking groups applauded SESTA/FOSTA, there were notable exceptions. As Massey noted, the nation’s largest network of anti-trafficking organizations, The Freedom Network, all but begged legislators not to mess with Section 230. To do so will lead to harm to those it seeks to help, it said.

From an open letter (PDF) The Freedom Network posted to lawmakers:

9 comments on “Craigslist personals, some subreddits yanked after passage of FOSTA”