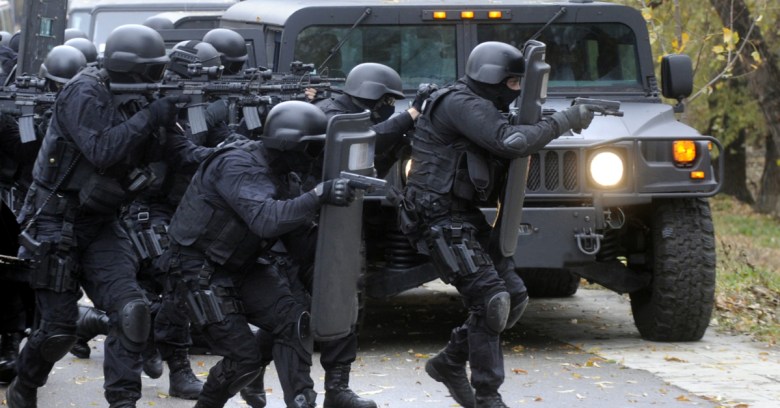 A few things you might not want to do next time you’re in jail for an alleged SWATting that got a man killed: tweet that you’re an eGod …

…and threaten to SWAT someone’s ass.

The tweets came from the account of Tyler Barriss. The 25-year-old Los Angeles man is in a Kansas jail, awaiting trial over allegedly making a bogus emergency call that led to the fatal police shooting of 28-year-old Andrew Finch in Wichita, Kansas on 28 December.

Barriss is facing a charge of involuntary manslaughter.

He allegedly made the call after a Call of Duty game in which two teammates were disputing a $1.50 wager. Apparently, one had accidentally “killed” a teammate in the first-person shooter game.

One of the players sent incorrect details of a nearby address to a known swatter, who was reportedly responsible for evacuations over a bomb hoax call at the Call of Duty World League Dallas Open in December.

Yes, I think we can definitely call what happened a SWAT. SWATting, which takes its name from elite law enforcement units called SWAT (Special Weapons and Tactics) teams, is the practice of making a false report to emergency services about shootings, bomb threats, hostage taking, or other alleged violent crime in the hopes that law enforcement will respond to a targeted address with deadly force.

In the recording of the emergency call that cost Finch his life, a man said he’d shot his father in the head. The caller also said he was holding his mother and a sibling at gunpoint in a closet. He said he’d poured gasoline all over the house and that he was thinking of lighting the house on fire.

Barriss might have expressed some kind of lukewarm remorse when he was arrested, but unless his Twitter account was hijacked at precisely the right time, it sounds like he has no qualms about referring to this potentially lethal hobby. The Twitter handle used to post the messages, @GoredTutor36, has previously been associated with Barriss.

So if he’s not an “eGod,” how did Barriss apparently get online?

A local paper, the Wichita Eagle, reports that there was a glitch during a software upgrade to an inmate kiosk that gave inmates internet access. Inmates use jail kiosks to check their account balances in order to buy items from the jail’s commissary and to send and receive messages. Beyond that, they’re not allowed to have access to the internet.

The Sedgwick County Sheriff’s Office on Monday said in a news release that the upgrade glitch gave inmates a chance to get onto the internet “for less than a few hours.”

Four tweets had gone out from Barriss’s account on Friday. One bragged about how much “swag” he had in jail.

The Sheriff’s Office said that the problem affected jail kiosks across the country, but it’s now fixed:

As soon as the path was identified it was closed and the affected kiosk was upgraded with the proper digital security features. [The kiosk that was upgraded improperly] has been tested and the issue did not reoccur.