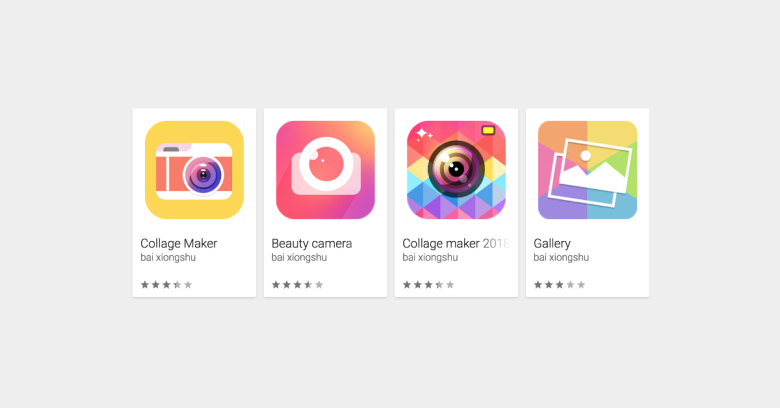 Thanks to Chen Yu of SophosLabs for her research.

The malware, identified by Sophos as Andr/Guerilla-D, found its way on to Google Play during March and April 2018, in innocent-looking photo editor apps.

SophosLabs detected the malware in a total of 25 apps, all of which have been reported to Google.

Sadly, it’s not the first time this malware has made it past Google’s Android app review process and into the walled garden of Google Play. Earlier this year SophosLabs alerted Google to the presence of more than a dozen malicious apps and published a report about Guerilla malware targeting Android users.

That extra Java code generates fraudulent ad revenue for the app developers by making the phone click on Google ads in the background, without users realising.

The new batch of Guerilla apps display a few technical differences from those removed from Google Play earlier this year.

Like the earlier apps, the latest ones hide their payloads in their asset folders as text files. This time around the apps use the filenames atop.txt or atgl.txt.

In an apparent effort to avoid detection, the JAR files now arrive encrypted, with the DES algorithm, and are decrypted on the phone.

The affected packages are:

In all areas of cybersecurity we recommend a strategy of defence in depth.

The safest place to get your Android apps is still Google Play. Although malware is found there fairly regularly, it’s still news when it happens. Google Play isn’t perfect but it’s a far safer environment than other, unregulated, app repositories.

Because no app review process can ever be perfect, we recommend running security software on your phone too, such as Sophos’s free Sophos Mobile Security for Android.

Google have removed all 25 apps from Google Play.