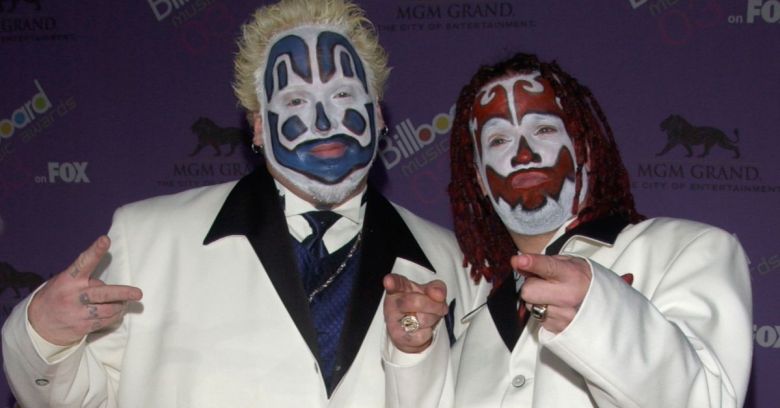 Over the weekend, a computer science blogger for WonderHowTo who’s known on Twitter as @tahkion announced his revelation that makeup worn by fans of the hip hop duo Insane Clown Posse (ICP) – collectively known as Juggalos or Juggalettes – makes it very difficult for facial recognition (FR) software to figure out the wearer’s identity.

i made a breakthrough. it turns out juggalo makeup defeats facial recognition successfully. if you want to avoid surveillance, become a juggalo i guess pic.twitter.com/kEh7fUQeXq

Tahkion says he discovered the facial recognition trickery while working on his own FR research project and was pretty surprised to find that Juggalo face paint was:

Some of the most effective camouflage I’ve found, even more effective than some styles created deliberately to fool such systems.

Of course, while Juggalo face paint may well fool automated FR, it makes the wearer far more recognizable to just about anyone else – say, humans, Tahkion said. For those who are truly devoted to avoiding facial recognition, this isn’t the answer. Rather, the surveillance-allergic would be better off with an FR-foiling disguise that still looks completely normal to the human eye.

Facial recognition relies on the distances between different landmarks placed on the face. Even though Juggalo makeup manages to “spoof” or replace these landmarks, this change is extremely visible. Ideally, one would want to use makeup or masks to be able to shift significant parts of the face – the jawline, nose, and eyes in particular. There isn’t really anything which has proven this possible yet, but it’s definitely the way these facial recognition evasion techniques are going to try to go.

There have been plenty of attempts to foil facial recognition technology over the years, be it makeup and hair styles a la CV Dazzle; reflective glass nanosphere clothing that ruins flash photography by turning the wearer into a “thermonuclear photobomber!”; creepy T-shirts printed with distorted celebrity likenesses designed to give the technology a migraine; and various iterations of the Privacy Visor: a wraparound, semi-transparent plastic sheet fitted over eyewear frames.

Tahkion noted that Juggalo makeup – a highly contrasted black and white clown mask – succeeds where such other, subtler facial-recognition-foiling techniques fail because it involves a radically redrawn jaw line.

for anyone wondering why some face changes evade facial recognition and others don't, here's a visualization of how landmarks are placed on a few examples. juggalo makeup is particularly effective as it basically totally redefines what is interpreted as the jawline pic.twitter.com/dFSx5FEGc9

As you can see, Juggalo makeup typically involves putting dark face paint below the mouth and stopping short before it hits the chin, which screws up automated facial recognition (AFR) software’s ability to locate the person’s jaw.

Commenters suggested that Juggalo makeup would only fool “really, really stupid software,” but that humans can easily look at such a face and tell that yup, there’s a jaw below the Joker-esque face paint. That misses the point, Tahkion said.

The power of facial recognition technology is that it’s automated and can churn through hundreds of thousands of faces and instantaneously slap identities on them. He explained that AFR neural networks are trained on contrast levels on normal facial landmarks – such as where a nose is located, or where chin turns into neck. That means that “you’d need to either have a user set the landmarks manually or train a network just on Juggalo facepaint.”

i don't know why i'm replying to this with a serious answer, but to summarize it's because the neural network is trained on contrast levels on normal facial landmarks. you would need to either have a user set the landmarks manually or train a network just on juggalo facepaint

AFR is already in wide use by law enforcement: last week, the FBI used the technology to identify the suspect who allegedly opened fire on the offices of Maryland newspaper Capital Gazette, killing five journalists.

While it is obviously understandable that law enforcement around the globe is eagerly adopting AFR technology, civil rights advocates are calling for caution and regulation around its mass use.

In the US, for one, the FBI had nearly half of the population’s likenesses in a massive face database as of March 2017, though lawmakers have raked it over the coals for doing so illegally, without regulation. The photos have come from civil and criminal mugshot photos, the State Department’s visa and passport databases, the Defense Department’s biometric database, and the drivers’ license databases of 18 states.

The database’s scope, plus the fact that it’s been unregulated, means that nearly half of all Americans are in a facial recognition database that the FBI can get at without warrants or without even having to prove they have reasonable suspicion that we’ve done anything wrong.

All this, in spite of the fact that AFR often screws up and misidentifies people.

Studies have found that black faces are disproportionately targeted by facial recognition, for one thing. According to a study from Georgetown University’s Center for Privacy and Technology, in certain states, black Americans are arrested up to three times their representation in the population, thus meaning they’re overrepresented in face databases. And just as African Americans are overrepresented, so too is their misidentification multiplied. Adding to this, FR technology algorithms have been found to be less accurate at identifying black faces.

During a March 2017 House oversight committee hearing, it emerged that 80% of the people in the database don’t have any sort of arrest record. Yet the system’s recognition algorithm inaccurately identifies them during criminal searches 15% of the time, with black women most often being misidentified.

Although AFR does make mistakes, Maryland police are convinced that the technology helped them identify the suspect in the Capital Gazette murders. Tim Altomare, Anne Arundel county police chief, from a 29 June press conference:

We would have been much longer in identifying and being able to push forward in the investigation without that system.

The suspect wasn’t carrying identification when he was apprehended. Initial attempts to use fingerprints didn’t work, given a “lag” on the computer system, Altomare said. Police came up with a likeness after running the suspect’s image through the Maryland Image Repository System (MIRS), which compares photos to millions of driver’s license pictures and mug shots. But some question whether the use of AFR was necessary in this case.

The suspect – 38-year-old Jarrod Ramos – allegedly sent three letters threatening to kill “every person present”: one to a lawyer, one to the Maryland Court of Special Appeals and one to a Baltimore City judge, according to The Baltimore Sun. Police told the Sun that the letters had Ramos’s return address on them. CNET quoted ACLU Legislative Counsel Neema Singh Guliani:

It’s extremely questionable that the police actually needed facial recognition technology to identify this shooter, who had made multiple prior threats, was in custody and was already fingerprinted. The public has a right to more answers and an informed debate before any mass surveillance capable technologies, like facial recognition, are acquired or utilized.

According to a national report from Georgetown University’s Center on Privacy & Technology, Maryland has some of the most aggressive facial recognition policies in the nation: using MIRS, Maryland police can search 7 million driver’s license photos, 3 million state mug shots, and 24.9 million mug shots contained in the FBI’s database.

In 2016, the ACLU accused the state of using MIRS without a warrant to identify protesters in Baltimore following the death of Freddie Gray while he was in police custody …which brings us back full circle to the Juggalo’s use of AFR-baffling makeup. In September, Juggalos marched on Washington in an effort to draw attention to a 2011 FBI Gang Task Force report that labeled the fans as a “loosely organized hybrid gang.”

The protestors, many wearing what now turns out to be makeup that may well baffle police’s identification of protestors and suspects alike, claimed that the label had a “devastating effect” on Juggalo lives, “ranging from denial of military service to loss of child custody to – the most common consequence – being added to a local and/or state gang list for wearing Juggalo-related merchandise or tattoos.”

Clearly, the facial recognition lines are being drawn more clearly every day, both literally and figuratively: police are claiming success in using AFR to quickly apprehend suspects, while protesters are literally drawing lines on their faces that baffle the technology allegedly used by police to surveil them. Readers, which side of the fence does your support fall on?