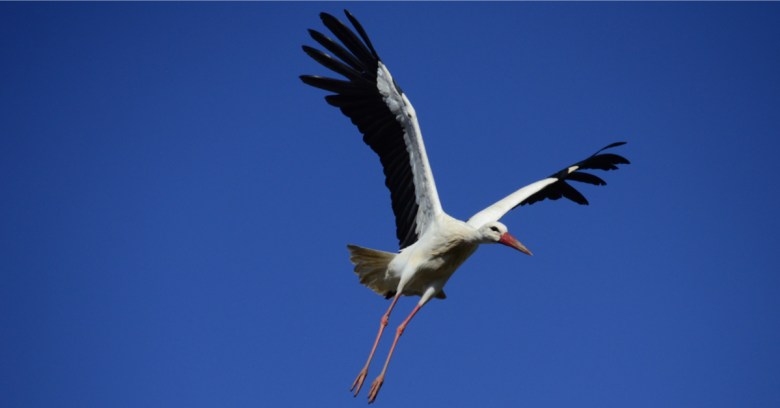 A migrating, tagged, male white stork—known to the Polish environmentalists who were tracking him as “Kajtek”—blipped out of contact on 26 April.

That, however, did not stop him from making good use of the SIM card in his GPS tracker, with which the bird—or somebody who found the GPS device and picked it apart in order to get at the card—racked up a $2,700 phone bill.

As IFL Science reports, Kajtek was last located at the Blue Nile valley in Sudan, on his way back home to Poland after successfully making his annual 6,000-kilometer (3,700-mile) trip to Africa, when his GPS tracker showed that he had stopped moving.

White storks aren’t endangered, though their habitats are threatened. The birds spend the warm summer months of the breeding season in parts of central and southern Europe—including in Poland—the Middle East, and west-central Asia before heading to Africa to spend the winter.

When his GPS tracker showed that Kajtek had stopped moving, researchers at the environmental group Grupa EkoLogiczna—EcoLogic—assumed the bird was dead. They had placed the tracker on him in April 2017: a “fairly routine” practice, as you can see by the many accounts of tagging white storks that the group posts to Facebook.

It was 26 April when things got weird. That’s when the scientists who were monitoring Kajtek’s tracker noticed that the bird’s signal again started to move, taking a roundabout, 25-kilometer (16-mile) trip before it went dead.

Then, a number of weeks later, on 7 June, EcoLogic got the giant bill from its phone company. According to The Register, the group said in June that someone pulled apart the tracker to get at the SIM card, then used it for a marathon call-everywhere-and-everyone spree.

EcoLogic told IFL Science that it doesn’t know who made the calls, but they’ll likely have to fork over the money for the phone bill out of their own pockets.

On average, white storks measure 100–115 cm (39–45 in) from beak tip to tail end, with a 155–215 cm (61–85 in) wingspan that lets them ride air thermals on their long journeys. They skip the Mediterranean in order to get into those thermals, which don’t form over water. In order to do that, they detour via the Levant in the east or the Strait of Gibraltar in the west.

Given the time lag between Kajtek’s cessation of movement and the phone-calling marathon, it seems unlikely that this magnificent beast was shot down just so somebody could get their hands on his tracker’s SIM card.

At least, let’s hope that’s not what happened. It’s bad enough that endangered animals are at growing risk of GPS “cyber-poachers”—including photographers, hunters and professional poachers—who use trackers to hunt them down.