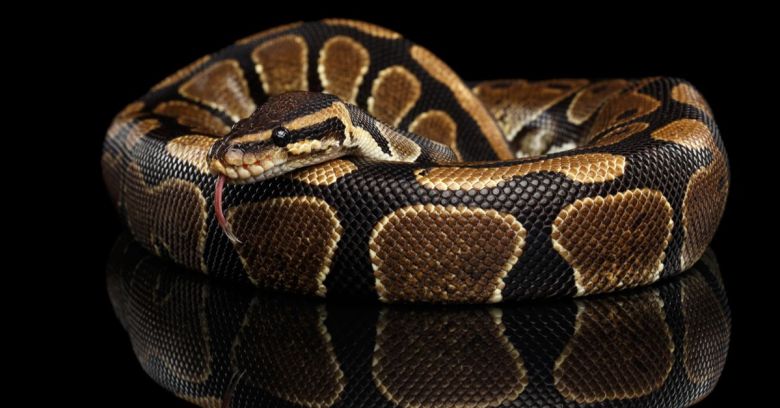 Somebody tried to board a plane in Miami with Python on their hard drive. What’s the big deal? It’s just a high-level programming language for general-purpose programming, for Pete’s sake!

…oh …I see …it was AN ACTUAL PYTHON – a ball python, crammed into some pantyhose, stuffed into a hard drive, hidden in checked luggage, bound for Barbados.

The US Transportation Security Administration (TSA) on Tuesday put up an Instagram post in which it said that its agents had “prevented a young Ball Python from flying the friendly skies” on Sunday.

The would-be snake smuggler was a woman on her way to Barbados. She had stuffed the snakelet into some pantyhose, then stuck it in a hard drive that she put into her checked luggage. Going by photos posted on the TSA’s Instagram post, the python didn’t suffocate, though it probably would have liked to stuff its owner into a hard drive and see how she liked it.

The python was handed over to the US Fish & Wildlife Service, and the service cited and fined the would-be snake smuggler for unspecified transgressions that should have included aggravated infliction of meme generation involving Samuel L. Jackson. 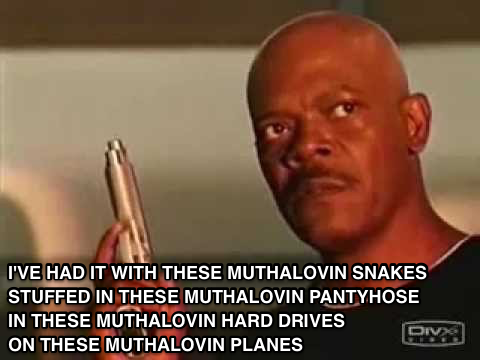 A TSA spokeswoman told the Miami Herald that an officer had discovered an “organic mass” inside an electronics device, which raises security flags. A TSA bomb expert was called into the baggage screening room to investigate the hard drive’s innards, and that’s when he discovered the mass was a live snake.

TSA spokeswoman Sari Koshetz told the newspaper that while the snake wasn’t a terrorist threat, there are plenty of times when wild animals in the cargo hold are in fact quite dangerous. Like, say, the crocodile that chewed through its plastic container (Warning: Tupperware is not recommended for transport of flesh-tearing reptiles) and was found loose in the cargo hold of a plane headed to Melbourne. Koshetz:

While this mass inside the electronic device was obviously not an imminent terrorist threat to the traveling public, the interception did prevent a possible wildlife threat on an aircraft. Animals of many species have been known to escape and chew through wires with fatal results.

Tell us about it! We’ve already brought you the shocking (get it??!!) news about squirrels possibly wreaking cyber outages with their rodenty chewing through wires, not to mention the RAT that gobbled up $17,500 in an ATM. Oh, excuse me, that would be the lowercase rat, one of which literally ate a smorgasbord of cash when it got in through a network cable access hole but then couldn’t quite figure out how to get back out.

In closing, we all need to heed TSA agent Bob Burns recommendations about what we should and shouldn’t bring onboard airplanes, including Satan’s pizza cutter. That thing will poke your eye out. Probably some innards, too.

11 comments on “Snakes on a plane! (Stuffed inside a hard drive)”