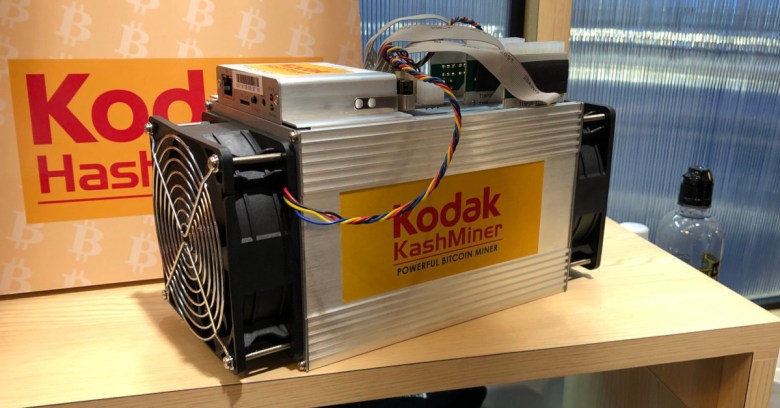 In the aisles full of head-scratching products being shown off at the massive Consumer Electronics Show (CES) in January, this “magic money-making machine” – that was supposed to be a bitcoin-mining computer – earned the dubious honor of being dubbed the WTF of the day:

How to sum it up? Really, Ataraxia Investments did the best job:

It was immediately labelled a scam. Now, the company behind it (which, it turns out, was not Kodak; rather, it was a Kodak licensee called Spotlite USA) has thrown in the towel on what people found to be an “astoundingly stupid” idea.

The thing looked like it was branded by the Eastman Kodak Company, which kind of, sort of made sense, given that the venerable, 138-year-old imaging technology company, which declared Chapter 11 bankruptcy in 2012, had been scrambling for reinvention and relevance for a while.

One of its we-still-matter plans: At the same time KashMiner reared its kashy head, Kodak launched KodakCoin, a “photocentric cryptocurrency to empower photographers and agencies to take greater control in image rights management.”

As BuzzFeed News’s Ryan Mac described it at the time, according to the brochure, customers would cough up $3,400 to rent a KashMiner and would receive a payout of about $375 per month for the next two years if bitcoin averaged a price of $14,000 in that time frame.

The brochure noted that the licensing company would take in 50% of the cryptocurrency mined, while paying for insurance, maintenance, and electricity (bitcoin mining is extremely power hungry) while they are reportedly stored at Kodak’s Rochester, New York headquarters.

Besides the fact that Kodak says KashMiner was never officially licensed, the hundreds of devices that Spotlite CEO Halston Mikail said would be installed at the Kodak headquarters in Rochester, New York – to take advantage of cheap electricity offered by an on-site power plant – never materialized.

But more important than all those logistics was the project’s reflection of a fundamental ignorance of basic principles of cryptocurrency. Saifedean Ammous, an economics professor and author of The Bitcoin Standard, pointed out at the time of KashMiner’s debut that the bitcoin protocol only releases a fixed amount of cryptocurrency each day. The more miners jump into the fray to compete with each other, the harder the computations get, and the more power they require.

Nicholas Weaver, a lecturer at the University of California, Berkeley, told BuzzFeed News that this basic cryptocurrency principle makes KashMiner’s premise – i.e., that computing speeds (known in the cryptocurrency world as “hash rates”) would remain the same – “ridiculous.”

This is how basic cryptocurrency protocol worked out in the real world during the six-month period leading up to KashMiner’s release, Weaver said:

Over the last six months, as more people have started to mine bitcoin, the hash rate has more than doubled, meaning you receive half as many bitcoins for the same amount of computing power.

A Kodak spokesman told the BBC that the project never got off the ground:

While you saw units at CES from our licensee Spotlite, the KashMiner is not a Kodak brand licensed product. Units were not installed at our headquarters.

Another snag: as Spotlite’s Mikail told the BBC, the US Securities and Exchange Commission (SEC) put its foot down, krushing the KashMiner’s krazy KryptoKrunching scheme.