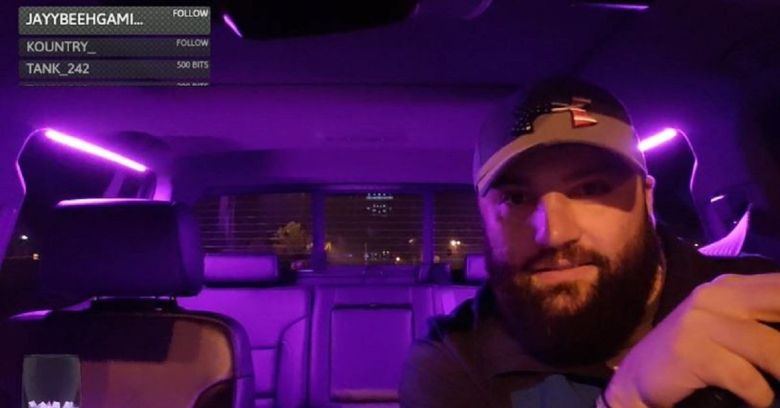 Have you recently climbed into the back seat of an Uber or Lyft in St. Louis?

If so, did you happen to find yourself bathed in purple light? …Chauffeured by a friendly, bearded driver named Jason?

If any of that rings a bell, it might be time to say welcome to candid camera, given that you may have been live-streamed to Twitch without your knowledge or say-so, and that strangers may have been discussing your behavior online during your unwitting performance.

Or rating your body. Or capturing upskirt video of your crotch. Or watching you throw up. Or spying on you while you kissed, or wept, or dissed your relatives/friends/boss.

That’s what happened to hundreds of passengers who happened to wind up in a truck being driven by Jason Gargac, a (now former) driver for Lyft and Uber who decided to start livestreaming his passengers, and himself as a narrator when they weren’t there, as he drove around St. Louis.

Starting in March and on up to this past weekend, when both companies terminated him, Gargac gave about 700 rides through Uber and more with Lyft, according to the St. Louis Post-Dispatch.

Most of those rides were streamed to Gargac’s channel on Twitch: a live-video website that’s popular with video gamers. And most of those live-streamed riders had no idea he was filming them, the newspaper reports. Gargac goes by the username “JustSmurf” on his channel, which blinked off of Twitch.tv on Saturday.

Here are the type of comments that Gargac’s Twitch subscribers amused themselves with: when a viewer rated a blonde passenger a “7” and a brunette a “5,” another viewer with the username “DrunkenEric” replied that…

The purple lights? They were used to illuminate passengers for the cameras. Two cameras, “about the size and shape of a deck of cards,” were mounted on the windshield, one facing outside, one facing inside the car. Gargac spent about $3,000 to outfit his car as a mobile recording studio, including what the St. Louis Post-Dispatch reports as a 12-button control panel that allowed him to toggle between camera views as he drove. He used what the newspaper called a “data setup” to keep his livestreams connected.

In an interview with the newspaper, Gargac said that at one point, he added a 4″ sticker on his back passenger window. It read:

Notice: For security this vehicle is equipped with audio and visual recording devices. Consent given by entering vehicle.

The Post-Dispatch managed to get in touch with a number of recorded people. None said that they’d noticed the sticker. They did say that they felt “dehumanized,” though, and asked that their names not be used in media coverage, given that they felt humiliated by the Twitch comments.

However, their first names, and even their full names, were sometimes revealed on the live stream. The same goes for their homes: Gargac at one point told his listeners that he intended to shut off the street-facing camera before he got close to a pickup address, to “protect people’s privacy and all that jazz.”

…if he remembers, that is. “I’m going to try to remember,” he says. “I’ll probably forget half the time.”

Gargac also told the St. Louis Post Dispatch that he muted addresses if he caught them before people uttered them, and that he’d muted one conversation about drug addiction and another about personal finances. He also created a “block” graphic he could trigger from his control panel to paste over things like that upskirt shot. He created it after one of his followers clipped the upskirt footage for later viewing, that is.

Part of his motivation was to avoid being banned from Twitch, given that its terms of service prohibit sexual material, he said.

So it’s partly the [terms of service] and partly to respect the people. You know, I wouldn’t want my junk out there on camera, so I’m going to try to respect everyone else as much as I can.

The Post-Dispatch published its report on Gargac’s livestreaming on Friday. In the week leading up to publishing, Lyft and Uber responded to the newspaper’s queries by issuing prepared responses that pointed to the fact that the practice is legal in Missouri, where only one party to a conversation needs to consent to it being recorded. Gargac was that one person.

Driver partners are responsible for complying with the law when providing trips, including privacy laws. Recording passengers without their consent is illegal in some states, but not Missouri.

That tune changed by Saturday, however. That’s when Uber sent an updated statement about having suspended Gargac from the app. It’s also when Gargac’s channel disappeared from Twitch. On Sunday, Lyft also said that the driver had been deactivated on its app. As of Monday, Uber told the newspaper that it had entirely ended its relationship with Gargac.

After the story was posted, Twitch said in a statement that it would remove content if it received a complaint from someone whose privacy was violated.

Chip Stewart, a professor at Texas Christian University who’s researched the privacy implications of livestreaming, told the Post-Dispatch that surreptitiously recorded passengers might have legal recourse, but the success of such a case might well depend on showing that they had a “reasonable expectation of privacy” when they climbed into Gargac’s truck.

Gargac, who told the newspaper that he considers his truck to be a public space – one in which he wouldn’t, say, have sex – could be facing not only civil litigation but possibly even criminal charges, given that he drove some fares into Illinois: a neighboring state that requires all parties to give consent to having conversations recorded.

His story has been picked up by the likes of the New York Times, “NBC Nightly News,” the BBC and “Good Morning America,” among others, and is being used to illustrate the haziness of current privacy laws.

In response to the media blowup, Uber on Monday confirmed that it was re-evaluating its policies.