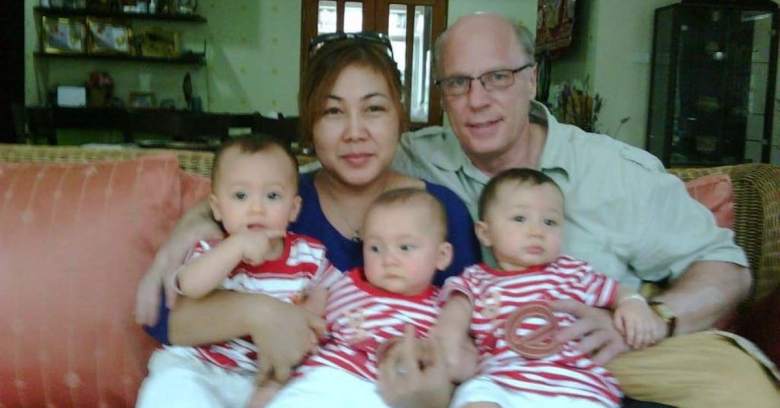 Out of sight, out of mind? Not on Facebook, where 8,000 miles between Illinois and Thailand is wiped out by a “here’s us with the kids!” pic.

Yes, it’s a happy photo that predates a whole lot of unhappiness, given that their relationship fell apart in 2009 and that child support proceedings subsequently geared up in Thailand and Higinbotham’s home country of the US.

In spite of their relationship breaking down, Teekhungam posted the photo to Facebook. And that is when Higinbotham grew most decidedly unhappy.

It’s not that his first wife – the one in the US – didn’t know about the Thai wife by the time the photo appeared online, as the Telegraph tells it.

No, it’s just that, to Higinbotham’s mind, this was all private information. That’s why he filed a privacy case against Teekhungam at the High Court for misuse of private information, breach of confidence and alleged breaches of the Data Protection Act over her uploading of the photograph.

The Telegraph reported on Wednesday that Higinbotham lost his battle to shut up the mother of his triplets, whom the already-married economist met in Bangkok in 2001 (10 years after his first marriage), later presented with an engagement ring, and told that she was the “perfect age to bear his children,” as the judge told the court.

Teekhungam knew he was already married. Regardless of that tiny detail, Higinbotham visited her whenever he was in south-east Asia, met her parents, paid a dowry, and “married” her in a ceremony in Thailand in 2004. The three boys were born in 2008 and were given their father’s surname.

The case wound up being heard in the UK because that’s where Teekhungam is now living, with her new husband.

The Telegraph quoted Justice Nicklin, who backed up an earlier court decision that Higinbotham’s claim should be struck out, saying it “has been brought, not for any legitimate reason, but as an act of harassment or revenge”.

The judge called the claim “worthless”, adding that we need to think of the children getting batted around in this oddball case:

In many ways, this case is extraordinary. But it is also very sad. Caught in the crossfire are three young children.

Nicklin said that by the time the photo was posted to Facebook, Higinbotham’s first wife already knew about his Thai wife and the triplets, and that the affair was well-known in their social circles.

At any rate, who in their right mind would think that they could keep a second wife and three kids locked away in a closet forever? That’s what Higinbotham intended, Nicklin described:

It is said that every photograph tells a story. But the story in this photograph is one the claimant did not want told. He wanted to keep secret the fact that he had a separate family in Thailand.

He contends that the eight-year-relationship with [Teekhungam] was undertaken on ‘the express understanding that their relationship would at all times be kept secret from the claimant’s family – in particular the claimant’s wife – friends and business associates.

This is perhaps where the unreality begins. Most rational people would recognize that the chances of keeping secret the existence of a second ‘wife’ and three children were slim to non-existent.

It is plain, however, that the claimant was confident that he could do so, perhaps relying on the fact that they were over 8,000 miles away from his first wife and life back in Illinois.

Oh, time, oh, distance: know yet not the might of the all-spanning Book that is Face?

As the Telegraph tells it, Nicklin concluded that information about his Thai family that Higinbotham wanted to hide away was so firmly embedded in the public domain, given the Thai and US proceedings, that it was “Canute-like” to think that his case would go anywhere.

Canute, as in, King Canute and the tide, an apocryphal 12th-century anecdote illustrating the piety or humility of King Canute the Great, who demonstrated to his flattering courtiers that he couldn’t control the elements (the incoming tide), explaining that secular power is vain compared to the supreme power of God.