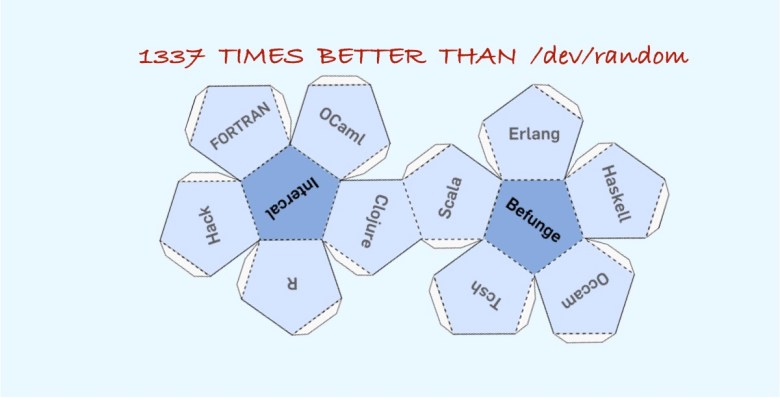 As you know by now – or can just pretend to know if you didn’t – it’s #SysAdminDay.

More precisely, it’s System Administrator Appreciation Day 2018 – the day when you are expected to appreciate your sysadmins, in word and in deed.

The sys in sysadmin, of course, means “the computer systems that you take for granted when they work and only really notice when something goes wrong.”

The admin part means “the computer-super-savvy person who not only spends 71% of their time valiantly trying to stop things going wrong in the first place, but also spends 141% of their time fixing stuff at short notice when it does go wrong, even – especially! – when it’s your fault for sneakily doing the very things they spent ages trying to stop you doing so things wouldn’t go wrong in the first place.”

Also, it’s your sysadmin’s fault if the batteries go flat in the Bluetooth mouse that you insisted you needed some time back in 2012 but then forgot at the back of your desk drawer and only rediscovered yesterday with verdigris from a pair of decaying AA cells all over the electrical contacts.

(Replacing dead batteries and powering on screens that “seem to have been infected overnight by some sort of mysterious firmware rootkit” take up the remaining 81% of a typical sysadmin’s day.)

Of course, appreciating your sysadmins in word and in deed raises the tricky questions, “What to say, and what to do?”

We think we can help, with the Sophos Naked Security Dodecahedron of Code.

A dodecahedron is a 12-sided figure – a regular polyhedron, to use the jargon term – that can be used as a die (yes, that is the singular of the word dice) to make random choices in much the same way that you use 6-hedrons, better known as cubes, to play games of chance such as craps.

If you’ve ever played Dungeons and Dragons or the like, you’ll know this as a D12: 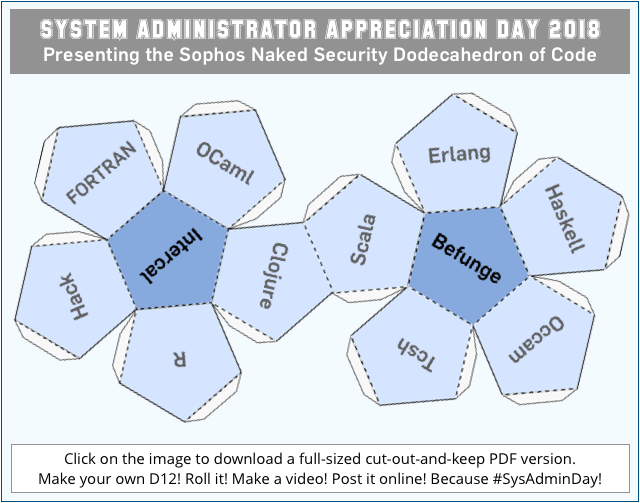 Rest assured, the Sophos Naked Security Dodecahedron of Code (or SnackDoc for short) is no ordinary D12.

The SnackDoc provides an ideal solution to the problem of religiosity, pomposity and parochialism in programming.

Sysadmins have to be better programmers than Programmers, because their code needs to do more, with less, at a faster speed, for more people…

…and it needs to do it THIS AFTERNOON, sometimes as an urgent fix to a problem brought on by unforeseen issues (as they are quaintly known) in the new version of a program that the Programmers have been working under a raft of different methodologies and management styles since 2009.

So, when Programmers With A Capital P tell sysadmins, “We need this NOW, and we need it written in a programming language that we lumbered you with”…

…well, you can see how that could cause friction.

What you need is a total SURRENDER OF SUBJECTIVITY in how you choose the language that your Programmers are going to get their code written in.

It doesn’t matter if you don’t know or like the language – what matters is [a] that it was chosen by the unerring hand of non-deterministic forces and [b] the Programmers know and like it less than you do.

So, in accordance with the important software engineering maxim that if the code was hard to write, it should be hard to understand, what you need is:

Build a Sophos Naked Security Dodecahedron of Code D12 for your sysadmins TODAY.

You KNOW it makes sense.