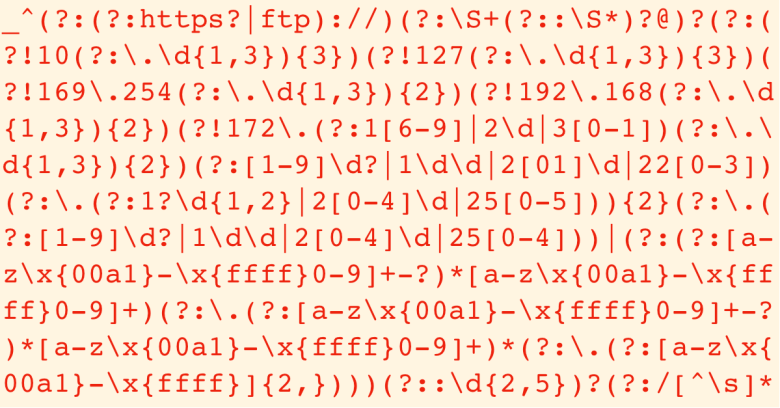 You’re in a long queue at the station and your train is due soon, but there are four ticket windows open and things are moving quickly and smoothly.

You’ll have plenty of time to buy your ticket, saunter to the platform and be off on your journey.

But then one of the ticket officials puts up a POSITION CLOSED sign and goes off shift; IT arrives to service the credit card machine at the second window; the third window gets a paper jam…

…and you hear the customer at the last working window say, “I’ve changed my mind – I don’t want to travel via Central London after all, so I’d like to cancel these tickets I just bought and find a cheaper route.”

A delay that would have been little more than a irritation at any other time ends up causing a Denial of Service attack on your travel.

If this has ever happened to you, you’ll appreciate this research paper from at the recent USENIX 2018 conference: Freezing the Web: A Study of ReDoS Vulnerabilities in JavaScript-based Web Servers.

The connection between missed trains and frozen websites might not immediately be obvious, so let’s explain.

Old-school (OK, old-school-ish) web servers like Apache typically use a separate process or thread to handle each connection that arrives.

Processes and threads aren’t quite the same – typically a process is a running app in its own right; each process can then subdivided into a number of sub-applications called threads, sometimes referred to as lightweight processes. Nevertheless, you can think of a both processes and threads as programs – they’re created, launched, scheduled, managed and killed off by the operating system. This means there’s quite a lot of overhead in starting, switching and stopping them – load that can really get in the way on a busy web server that’s handling hundreds or thousands of short-lived connections every second.

In our station ticket office analogy, a multi-process or multi-threaded web server wheels out your very own temporary ticket window when you arrive, and you’re assigned to it regardless of what’s going on at other ticket windows.

Under modest load, this works really well, because you’re insulated from the effects of being mixed in with other travellers, some of whom might ask questions that unexpectedly take a long time to answer and hold everyone up.

But under heavy load, the the multi-process model starts to get sluggish – the server and operating system take longer building separate ticket windows for everyone than they do issuing tickets, so everyone waits longer than necessary.

React to traffic, not to connections

Many modern web servers, therefore, notably those written in JavaScript using progamming environments such as Node.js, are event-driven rather than connection-driven.

Loosely speaking, the system assigns one process to handle all the network traffic, working on any user’s outstanding transactions only when there’s something new to go on.

This model is more like the waiting area in a burger joint or a fish-and-chip shop, where you place your order on arrival; when it’s ready, someone calls your number so you can collect your food and leave.

While you’re waiting, there’s no point in having a member of staff assigned specially to look after you, or a cash register already allocated to you but tied up until it’s your time to pay.

The staff in a burger bar or chip shop might as well ignore you while you’re waiting – you’ll be waiting anyway, after all – and get on undistracted with other work.

As long as they alert you promptly enough when your order is ready, overall efficiency will typically be higher and therefore everyone’s overall waiting time will be shorter.

When things lock up

The event-driven model does have one weak spot: it can clog up disastrously if even a few key steps in the process take longer than anticipated.

That’s a bit like seeing your burger congealing slowly and sadly behind the counter if you’re order number 32 but the person who calls out the orders is side-tracked trying to sort out an argument with customer 31.

In other words, event-driven servers can be highly efficient…

…provided that they don’t get bogged down dealing with unusual or unexpected events.

And that’s what our researchers went looking for: routine content-handling code in JavaScript web servers that handled unexpected data badly.

As you can imagine, web servers need to do a lot of text-based pattern matching in order to deconstruct incoming web requests, which might look like this:

The jargon term for pulling text input apart into its important components is parsing.

In the web request above:

In many modern programming languages, notably JavaScript, the go-to technique for text matching is a tool called the Regular Expression, or RE for short.

That’s where the cool-sounding threat name ReDoS in the paper title comes from: it means Denial of Service (bogging down the server) through Regular Expressions.

Let’s look at the problem of taking the text string q=0.5 and splitting it up into q and 0.5, so we can interpret its meaning.

The old-school way of doing it, familiar to anyone who’s used BASIC, would be to code it by hand, starting with something like this:

If FIND comes back with zero, it means it found nothing; otherwise, it tells us where the match happened, so we know where to split the input into the key (the left-hand side) and the value (the right-hand side).

We need to take (POS-1) characters from the left of the equals sign for the key; for the value, we take POS characters less than the length of the string from the right hand end:

That code is fairly easy to understand, and very efficient, because it precisely encodes the simple algorithm of “look for the splitting point and then do the chopping”.

But it’s a bit of a pain to have to spell out the process of matching the pattern instead of just being able to express a pattern and let a matching utility do the work, which is what you can do with regular expressions.

Here’s an RE that could be used, not correctly but effectively enough, in place of the hard-wired code above: (.+)=(.+).

REs look cryptic, because of the weird and confusing way they use characters as abbreviations – indeed, their cryptic look makes them easy to get wrong: 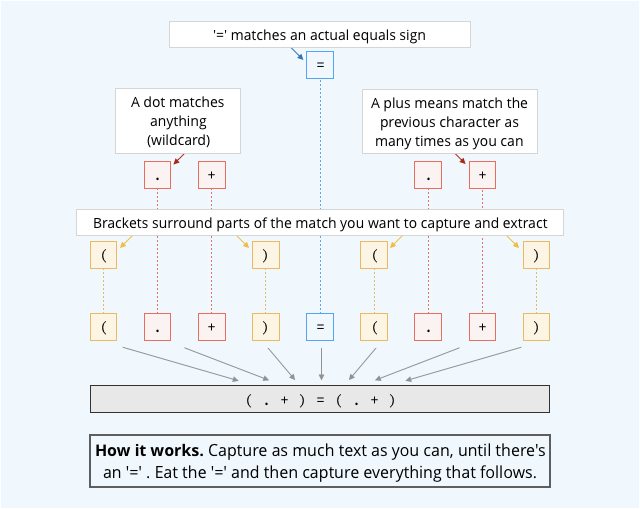 Easy to get wrong

Once you get used to REs, however, they’re hard to wean yourself off, because they’re simple and, well, expressive.

In a contemporary programming language, you might be able to replace something like this, where str.find matches a character and str.sub explicitly extracts a substring…

…with the rather more elegant-looking, and more easily tweaked, use of an RE-matching library:

The problem, as the researchers of the ReDoS paper point out, is that REs like the one above do the job you want, and easily pass software acceptance tests, yet do their job wrongly.

The problem is that the RE above matches anywhere in the input text, and the str.match function tries as hard as it can to find a match – a time-consuming side-effect that you probably won’t notice until:

Note that the only character this RE has to latch onto explicitly is an equals sign.

If there isn’t an equals sign, the RE will try to match its pattern starting at offset 1 in the input string, but will fail; the matcher will then try again from offset 2, and fail again; then from the third character along; and so on.

If there are LEN characters in the input, the matching function ends up running LEN times, against an average of LEN/2 characters, which is proportional to the square of LEN, causing a massive crunch in performance as LEN increases.

You need to tell the RE matcher to lock the match to the start of the input so that it only goes through the input data once.

This is known as anchoring the search.

The difference in performance is enormous, and gets quadratically worse for the unanchored match as the input gets longer.

Note that in the graphs below, the axis showing the linear performance of the anchored match tops out at 2/1000ths of second for a 100K input string, while the quadratically performing unanchored match takes more than one full second for the same job.

That’s 500 times slower because of the missing lockdown character ^ at the start of the RE, with the discrepancy getting worse at an ever increasing rate as the input size increases further: 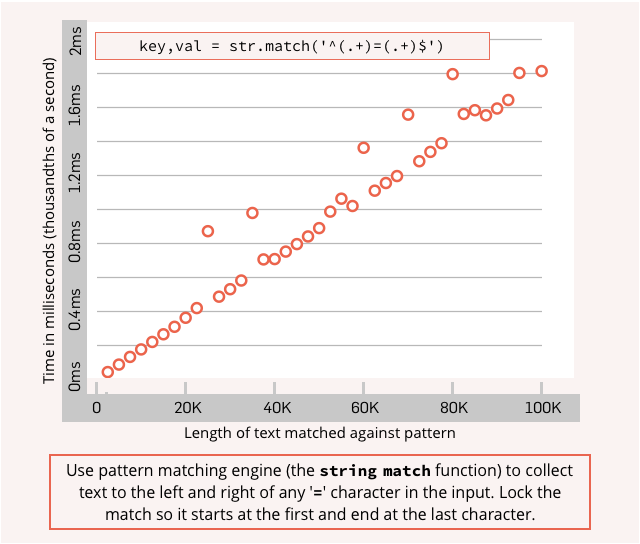 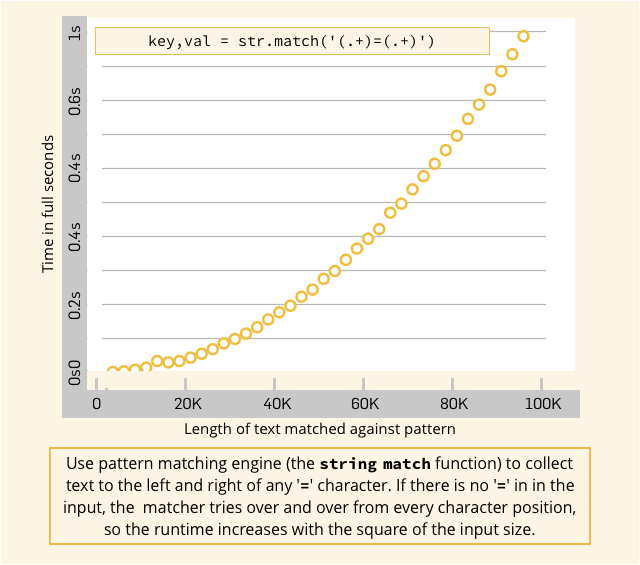 The ReDoS paper isn’t terribly bad news, but it is a potent reminder that code that looks right, and that actually works, may fail badly in real life.

In particular, clogging up an event-driven web server with pathologically devised HTTP headers – parsing that is performed as matter of routine for every incoming request – could make an otherwise-secure server easy to “freeze” with a ReDoS attack.

The researchers discovered numerous examples of real-world code that could, in theory, very easily be brought to its knees because of an overly casual use of regular expressions to pre-process web headers.

If you can figure out a malformed header that a badly-chosen string matching RE will choke on, you’ve got the raw material for a ReDoS.

In some cases, the risky REs – the possible causes of a ReDoS – were not unique to one company’s customised code, but were inherited from a standard programming library.

Fortunately, the problems are easily fixed:

10 comments on “Serious Security: How to stop dodgy HTTP headers clogging your website”