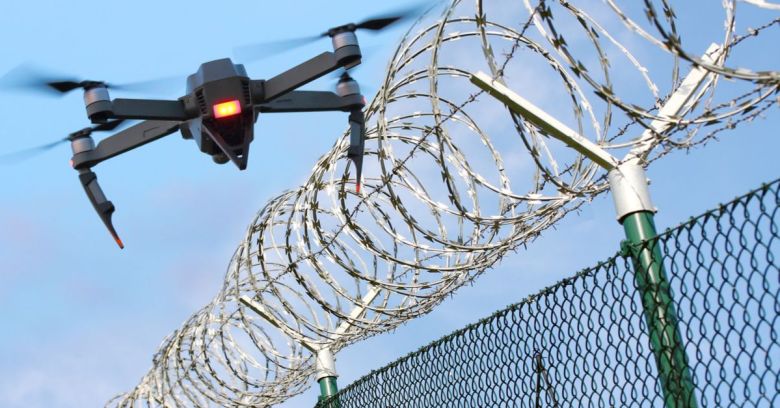 Step aside Amazon, drone deliveries are already a thing in prisons. There are many things that conspirators on the outside can do drone-wise: drop mobile phones, chargers, batteries, drugs, knives, memory cards, earphones, saws, or even drills.

There are also many ways for those drone drops to be duds: sometimes they crash into walls, spark fights in the prison yard or get snagged on barbed wire.

Now, we have a new drone-delivering duh: the criminals who didn’t realize their drone was filming them. Because it has a C A M E R A.

As the BBC reports, two Scottish men were caught smuggling drugs – well, trying to, anyway – into Perth Prison when they accidentally filmed themselves packing cannabis and pills into a drone.

The pair, Paul Reilly, 32, and Michael Martin, 35, were trying to get the contraband to Martin’s prisoner brother, but they mistakenly filmed themselves loading up the drone with £3,000 (around US $4,000) worth of drugs hidden inside Kinder Egg candy. (You might not be familiar with those sugary delights – in which a chocolate egg surrounds a plastic capsule containing a small toy – given that they’ve been banned in the US up until 2017, due to a 1930s law banning candy with non-food, choky objects inside.)

Besides videotaping themselves as they stuffed the eggs with white pills and hashish, Reilly and Martin also managed to record the door number of the house they were in, plus their car, which was parked outside.

The BBC reports that police recognized the pair from the video.

Fiscal depute John Malpass told the court that at 1 a.m. on 22 September 2017, a prison officer was patrolling the grounds when he heard a buzzing noise overhead.

The prison officer couldn’t make out anything in the dark, but as he walked the perimeter wall, he noticed a drone lying on the ground with a cellophane package lying next to it… below the window of the cell in which Martin’s brother was being held while serving his sentence.

Police seized the crashed drone, the drug package, and the camera attached to the drone, along with its evidence-containing micro SD card. It had one video file on it, Malpass told the court:

In the footage it is clear the drone has been switched on to try it out, but – unfortunately for those present – it was recording without the knowledge of the suspects and shows three males.

They were later identified as Reilly, Martin and a third, as yet unidentified, male, within a bedroom of the house at 66 East March Street, Kirkcaldy.

There was footage of Reilly wearing gloves, filling the recovered Kinder Egg with white pills and cutting up the cannabis resin into square blocks.

Reilly was sentenced to 33 months, while Martin got a year in prison.

Cameras gonna do what cameras gotta do

Well, mateys, Kinder me breeches: This is yet another example of how candy rots your teeth, or your brain, or both. But more to the point, it’s a lesson to all of us, most particularly the non-felonious, that we need to know what has a camera on it and what doesn’t… And when those cameras are turned on.

Do Not Worry: if you’re fresh out of sticky notes to cover up those bad boys, Sophos has a webcam cover that does the trick!

Here’s a public service announcement from Naked Security’s Paul Ducklin regarding the fact that anything with a camera in it can record you… especially if it’s a drone sold with a clear marketing pitch of letting you take great aerial shots:

Think of your mobile phone – probably with not one but two cameras in it. When your phone is turned on, if and when the cameras are active is only vaguely up to you. For the most part, that ‘if and when’ is up to the person or persons who wrote the firmware that was in the phone when you bought it.

You don’t have to be happy that the IT world has ended up that way – but you do need to be aware of it!

3 comments on “Prison smuggler busted by his own drone camera”