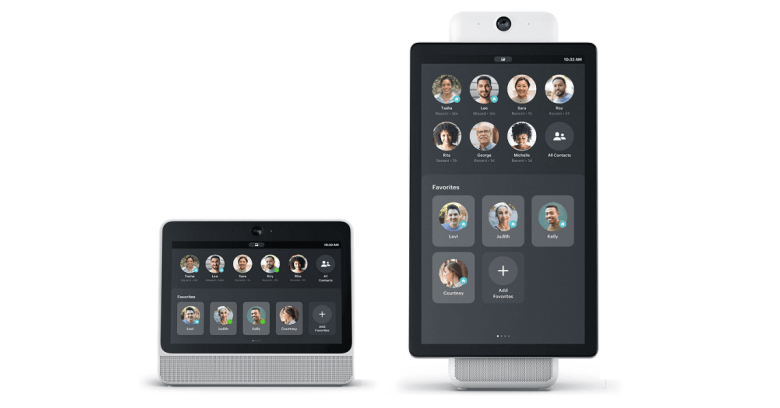 There’s nothing like losing control over 50 million users’ data to screw up the product launch of a video camera-enabled smart device that tracks people in their homes and listens constantly.

Facebook was supposed to launch Portal, its four-microphone, always-listening-for-voice-triggers gadget, at its F8 developer conference in May. But then, oh well! Things happened.

Never fear, though: Facebook’s now back on track, fearlessly making a beeline for your kitchen counter or your living room or your anywhere.

The company announced on Monday that in the US, you can now pre-order the $199 Portal and the $349 Portal+, which has a bigger screen and a pivoting display, to

help you feel closer to the important people in your life and make video chats feel less like a call, and more like you’re actually in the same room.

If you take a shine to the notion of a Facebook speaker squatting on your counter, you can look forward to Portal’s artificial intelligence- (AI)-powered smart camera and smart sound keeping an eagle eye on you, swivelling, panning and zooming to watch you as you cook, or to include anybody who walks into the room, and minimizing background, kitchen gadget-y noises to boost the sound of whoever’s talking, no matter where they go. Facebook:

It’s like having your own cinematographer and sound crew direct your personal video calls.

Portal not only gives you hands-free voice control, enabling you to get its attention by saying “Hey, Portal,” and then telling it who to call, but it’s also impregnated with Amazon Alexa. That means you can check the weather, control smart home devices, order groceries, and hope that your speaker doesn’t listen to commands hidden inside audio that’s inaudible to puny human ears and thereby get tricked into dialing a phone number, accessing a potential malware-rigged website, or perhaps even buying something.

But what about voice-activated home speaker glitches recording everything they hear, even when their owners tell them not to, as happened with Google’s Home Mini, you ask?

Facebook has emphasized that Portal was built “with Privacy + Security in Mind.” That means that the camera and microphone can be disabled with a single tap, that it’s got a built-in camera cover, and isn’t grabbing the content of your calls to crunch on its servers:

Facebook doesn’t listen to, view, or keep the contents of your Portal video calls. Your Portal conversations stay between you and the people you’re calling. In addition, video calls on Portal are encrypted, so your calls are always secure.

So hey, Alexa, answer me this: what assurances do we have that Facebook won’t listen to what we say?

Well, Facebook says that AI technology only runs locally on Portal, not on its servers. Nor is its camera using facial recognition, it says, and it doesn’t identify who you are.

Regardless of being integrated with Alexa, it’s clear that Portal is going to be in direct competition with Amazon’s Echo.

How many shopping days left before Christmas? Enough to ponder whether you want the spawn of Facebook and always-listening, AI-powered, my-camera-eyes-are-following-you smart gadgetry in your home.

I’m guessing a lot of security researchers will be saying “yes”.

3 comments on “Hey Portal, what’s that Facebook device in my kitchen?”