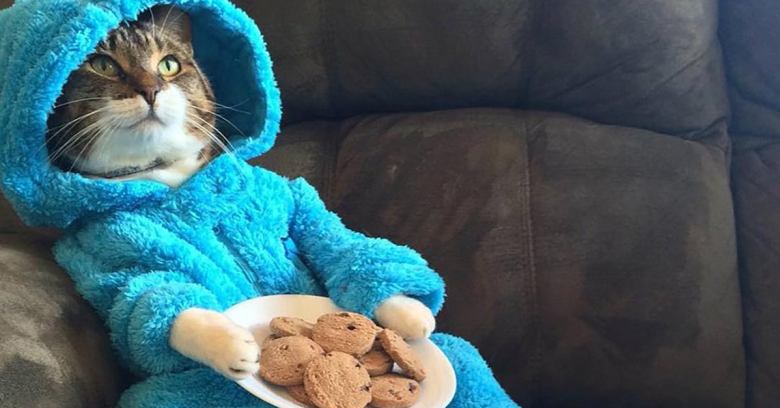 Canberra’s US embassy accidentally exposed details of one of its more enticing get-togethers last week, after an employee distributed a meeting invite to an undisclosed number of email recipients, The Guardian reported.

Gavin Sundwall, US Mission to Australia public affairs counsellor, was, however, unperturbed, by what he claimed was a “training error”:

Sorry to disappoint those of you who were hoping to attend this ‘cat pyjama-jam’ party, but such an event falls well outside our area of expertise. It was a training error made by one of our new staff testing out our email newsletter platform.

The email – entitled “Meeting” – featured an attractive tabby cat relaxing on the sofa in a Cookie Monster-style onesie, with a plate of delicious edibles on his or her lap.

Sundwall also said that they would be employing “strong new management controls” to prevent a repeat of the mistake.

Marketers like to have a bit of fun occasionally, and featuring fluffy, cosy, baked goods-consuming felines could be considered an essential weapon in winning managerial approval when templating new communications.

However, it’s worrying just how often this sort of thing is delivered to the masses before its error-free and thoroughly vetted time.

How often have you, as a consumer, received an “Oops” email from a brand you’re subscribed to? It could, perhaps, be a cunning marketing ploy to get us to read it (who doesn’t want to see a big company making a fool of itself, after all?). But at least some of these premature firings are genuine mistakes.

The US embassy was lucky, really, that it hadn’t exposed confidential information, insensitively emailed everyone on its list, or featured a disturbing image (although some may find a cat in a Cookie Monster suit disturbing).

Other examples of companies lacking due diligence when it comes to emails range from the humorous to the dangerous, and include: